The FDA hasn't banned the sale of cannabidiol oils because a drug company is interested in marketing them. 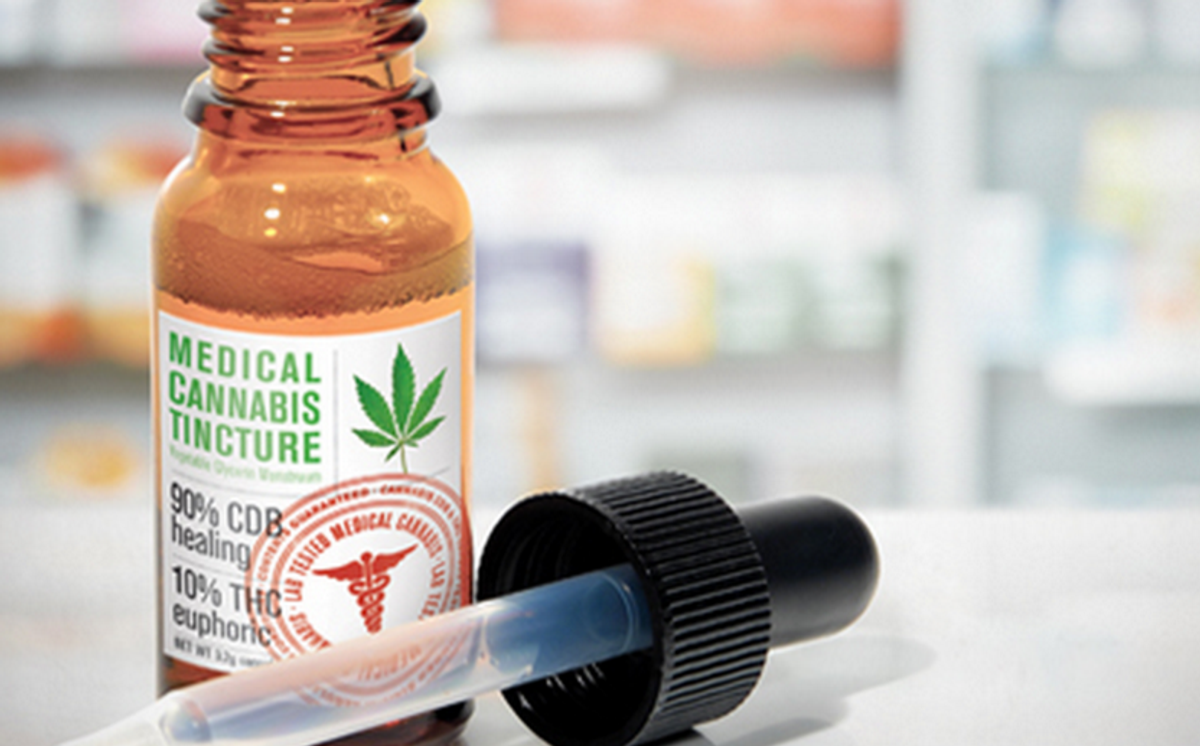 Claim:
The Food and Drug Administration (FDA) banned the sale of cannabidiol (CBD) oils because a drug company is interested in marketing them.
Rating: Although the article was later substantially edited, its original version was republished verbatim to alternative news blog The Event Chronicle on 21 March 2016. The original article, which was credited to Natural News' "Health Ranger" Mike Adams, stated:

Hemp oil extracts containing CBDs (cannibidiols) are such a threat to the pharmaceutical industry that the FDA is now invoking totally insane justifications for outlawing them.

So the FDA has just launched a massive regulatory assault against CBDs by invoking the most insane logic you’ve ever heard ... The FDA just criminalized one of the most miraculous healing medicines in the world by handing it over to Big Pharma[.]

In other words, the FDA just handed Big Pharma an absolute monopoly over CBDs (hemp oil extract) by ridiculously claiming such natural products are “adulterated” with molecules (CBDs) that the FDA says might one day become a drug.

The relationship between digital articles and social media is such that a large share of the reading audience is exposed only to the headline of any given article and not its full text. One estimate from 2014 suggested that as many as four in ten people only read an item's title, a figure which could be far higher when multiplied by Facebook. Thus, Adams' claims led many to infer that the FDA had indeed issued an immediate, sweeping ban on CBDs (a product popular among chronic pain sufferers).

The original article contained several links that readers might have presumed corroborated its claims. The first relevant link was to a 19 February 2016 article which in no way indicated that the FDA had banned CBDs; it simply reported on warning letters sent by the FDA to CBD oil manufacturers with respect to "impermissible" label claims:

The debate over hemp CBD's legal status continues after FDA sent eight warning letters to manufacturers of CBD dietary supplement and food products earlier this month. The warning letters cite impermissible health claims used to market the products, as well as CBD's invalid status as a dietary ingredient due to its presence in two drug applications currently under consideration.

On February 4, FDA sent warning letters to eight companies marketing CBD foods and dietary supplements, partially on the basis of impermissible medical claims used in marketing materials. These include suggestions that CBD may be used to reduce symptoms of schizophrenia, rheumatoid arthritis, diabetes, cancer, multiple sclerosis, and more.

The next link pointed to a nearly month-old article published by the Cannabusiness web site on 22 February 2016. Cannabusiness' coverage appeared to describe CBDs labeled and marketed in a manner that violated FDA labeling regulations:

This continues the FDA's ongoing battle against unapproved CBD products. In April of 2015, the FDA issued six similar warnings to companies with varying amounts of CBD.

Pain Bomb, one of the companies in question, was issued an FDA warning February 4th, 2016. Members of the FDA wrote "PainBomb violated the FDC [Food, Drug, and Cosmetic] Act by misbranding its products. The diseases for which PainBomb marketed its products cannot be self-diagnosed or self-treated by people other than health care professionals. For this reason, PainBomb’s instruction labels informing users whether and how to use its products violate the FDC Act."

Cannabusiness linked to a 16 February 2016 article published by legal blog Above The Law, which concisely explained why the FDA was sending letters to CBD oil vendors:

In April 2015, the FDA sent warning letters to six companies whose products allegedly contained CBD. The FDA warned these companies about marketing and selling unapproved drugs to diagnose, mitigate, treat, or prevent diseases in humans or animals.

The FDA sent out a fresh round of warning letters to eight new companies. The FDA's February 4th letter to PainBomb, LLC about the company's "PainBomb+CBD" products is representative of the letters, and it states ... PainBomb's websites and accompanying literature seek to sell drugs covered by section 201(g)(1)(B) of the Federal Food, Drug, and Cosmetic Act [(the "FDC Act")] [21 U.S.C. § 321(g)(1)(B)] because they are intended for use in the diagnosis, cure, mitigation, treatment, or prevention of disease.

PainBomb violated the FDC Act by misbranding its products. The diseases for which PainBomb marketed its products cannot be self-diagnosed or self-treated by people other than health care professionals. For this reason, PainBomb's instruction labels informing users whether and how to use its products violate the FDC Act.

Notably, the FDA in no way issued a ban of any description on the sale of CBD oils. Rather, the agency stepped in to warn several manufacturers that their products could not be marketed or labeled as "intended for use in the diagnosis, cure, mitigation, treatment, or prevention of disease" without further FDA oversight. And as it happens, section 201(g)(1)(B) of the FDC Act pertains to the labeling of products under its governance:

The term "drug" means ... (B) articles intended for use in the diagnosis, cure, mitigation, treatment, or prevention of disease in man or other animals[.]

Warning letters dated 4 February 2016 were published by the FDA to their web site, and the manner in which the agency alleged the CBD manufacturers were in violation of the FDC Act (i.e., marketing their products as dietary supplements) was clearly described:

The claims on your websites establish that the products are drugs under section 201(g)(1)(B) of the Federal Food, Drug, and Cosmetic Act (the Act) [21 U.S.C. § 321(g)(1)(B)] because they are intended for use in the diagnosis, cure, mitigation, treatment, or prevention of disease. As explained further below, introducing or delivering these products for introduction into interstate commerce for such uses violates the Act. You can find the Act and FDA regulations through links on FDA's home page at www.fda.gov.

Although you market "Bluebird Botanicals Bulletproof CBD Blend," "US Hemp Wholesale 25% CBD Hemp Oil Supplement" (aka "Gold Label CBD Hemp Oil"), "Plus CBD Oil," "Endoca Hemp Oil," and "Tasty Hemp Oil Tasty Drops" as dietary supplements, FDA has concluded based on available evidence that CBD products are excluded from the dietary supplement definition under section 201(ff)(3)(B)(ii) of the Act [21 U.S.C. § 321(ff)(3)(B)(ii)]. Under that provision, if an article (such as CBD) has been authorized for investigation as a new drug for which substantial clinical investigations have been instituted and for which the existence of such investigations has been made public, then products containing that substance are outside the definition of a dietary supplement. There is an exception if the substance was "marketed as" a dietary supplement or as a conventional food before the new drug investigations were authorized; however, based on available evidence, FDA has concluded that this is not the case for CBD.

Several examples of such labeling or marketing were included in the letters, many of which clearly appeared to violate the cited regulations:

"CBD is as effective as traditional medications in treating schizophrenia. This latest research supports earlier theories that CBD could be effective as an antipsychotic medication ..."

The FDA concluded by ordering the companies to rectify their labeling and marketing practices (not by mandating that the products be withdrawn from the market):

You should take prompt action to correct the violations cited in this letter. Failure to promptly correct these violations may result in legal action without further notice, including, without limitation, seizure and injunction.

In summation, the FDA's warning involved how the products were marketed and labeled (as drugs intended to cure, prevent, or treat a medical condition), and not the legality of the products themselves. At some point between 20 March 2016 and 23 March 2016, Natural News significantly edited the original article, with Adams disingenuously maintaining that his use of the rather unambiguous term "outlawed" had been misconstrued by readers to mean that the products in question had been "outlawed":

MAJOR CORRECTIONS: I'm issuing a huge correction / clarification to this story after speaking with people in the hemp industry. They've pointed out that my article, although posted with the best intentions to help keep CBDs legal and readily available, was freaking out CBD retailers who thought some sort of new law had been passed outlawing CBDs.

In no way did I intend to disrupt CBD retailers with that article! My only goal was to sound the alarm of how to FDA is attempting to destroy this entire industry, and help create a backlash that would keep natural medicine legal in America.

So I've decided to post a serious correction / clarification to this story to make sure nobody misreads what I'm asserting here, and I apologize for any misconstruing of my intention in posting this ... Essentially, my use of the term "outlawed" in the title of my original article was misconstrued. By "outlawed," I meant the FDA essentially writes its own "regulatory laws" and has posted a clear statement on its own website which states that CBDs cannot be sold as a dietary supplement. This is a regulatory attack on hemp extracts, but it is not technically a law that was passed by Congress. I regret my choice of the word "outlawed", and I will be more careful in my choice of words when covering this issue in the future. In the article below, I have replaced any reference to "outlawing" with the more accurate terminology of "regulating out of compliance" or similar language.

Now the FDA has begun sending warning letters to CBD makers, claiming they are in violation of FDA regulations because they are selling "adulterated products." Adulterated with what, exactly? CBDs, of course! "The debate over hemp CBD’s legal status continues after FDA sent eight warning letters to manufacturers of CBD dietary supplement and food products earlier this month," reports Nutritional Outlook. "The warning letters cite impermissible health claims used to market the products, as well as CBD’s invalid status as a dietary ingredient due to its presence in two drug applications currently under consideration."

Another commonly reproduced bit of verbiage held (without substantiation) that the impetus behind the FDA actions was a drug company's interest in CBDs:

The FDA just outlawed CBDs and hemp oil extracts by invoking a totally insane regulation you won't even believe.

Because a drug company is investigating CBDs for use as a medication, the FDA now says it is illegal for CBDs to be sold in any dietary supplement.

The wildly inaccurate representation wasn't out of line with the untrustworthy content practices associated with Natural News. Prior articles published on that site asserted that welfare recipients would be forced to receive RFID chip implants, that Chipotle's foodborne illness outbreaks were the work of pro-GMO bioterrorists, that doctors were responsible for more deaths than guns in America, that the Centers for Disease Control (CDC) issued a warning urging Americans not to get the flu shot, that a Johns Hopkins scientist blew the lid off the hidden risks of influenza vaccination, and (perhaps most bizarrely) that the government was engaged in a program to utilize aerosolized "thought control" vaccines on the population. All but two of these claims were advanced by "Health Ranger" Mike Adams.