Did FBI Say It Illegally Wiretapped Donald Trump and Apologize For It?

A right-wing network grossly distorted the contents of a statement written by agency director Christopher Wray. 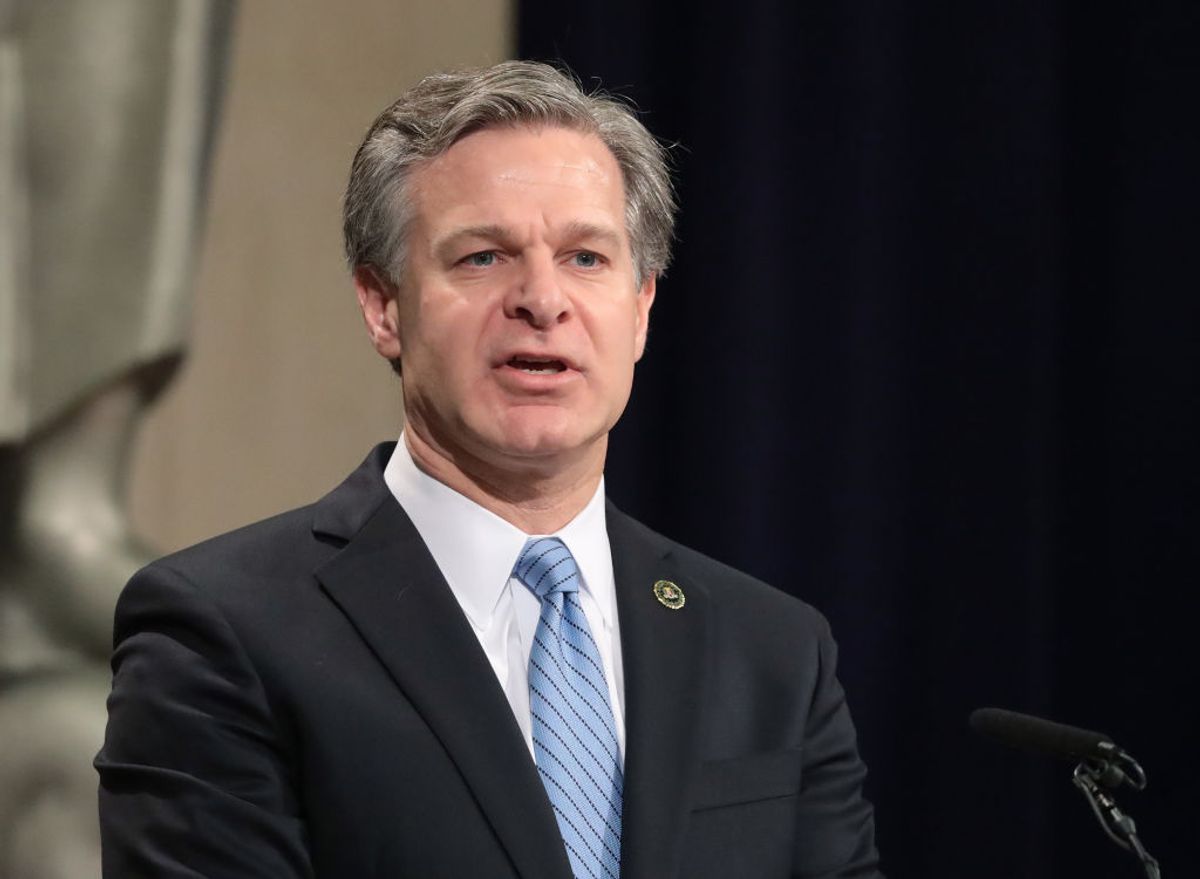 Claim:
In January 2020, FBI Director Christopher Wray said that the bureau had illegally wiretapped Donald Trump and apologized for it.
Rating:

In January 2020, readers asked us about the accuracy of a report that claimed the FBI had "admitted" illegally wiretapping U.S. President Donald Trump, and had apologized for it.

On Jan. 12, the right-wing website and network One America News (OANN) broadcast a report with the headline "FBI Admits Illegal Wiretapping of Donald Trump, Issues Apology." In the segment, Chanel Rion presented the following account:

Wray's apology comes as a result of a FISA court looking into the wrongful surveillance of Trump advisor Carter Page. In a statement to the FISA court, Wray writes that the FBI's behavior surveilling the Trump campaign was "unacceptable and unrepresentative of the FBI as an institution," and that "the FBI deeply regrets the errors and omissions identified by" the Inspector General -- errors and omissions that allowed the FBI to continue to surveil what we have now learned [were] completely innocent Trump associates like Carter Page, George Papadopoulos and Gen. Mike Flynn.

President Trump responded to the apology on Twitter, indignant at the lack of justice for those harmed by these FBI abuses of power: "Chris [Wray], what about all of the lives that were ruined because of the so-called 'errors'? Are these 'dirty cops' going to pay a big price for the fraud they committed?" President Trump has relentlessly attacked FBI leadership for being "crooked." This admission from Wray is vindicating not only to President Trump, but for the Washington set that has long suspected the FBI to be a corrupt and politically-weaponized institution.

As a reminder, FISA is a law with its own secret court system that allows the FBI to surveil suspected spies, terrorists and foreign agents on U.S. soil. To obtain FISA warrants to wiretap suspects, the federal government must convince the FISA judge the person being surveilled is a foreign agent and a direct threat to the republic. We now know, after [Michael] Horowitz's IG report, that the FBI lied about their reasons for listening in to the Trump campaign. The IG report demonstrated yet another instance in which Democrats and its [sic] weaponized bureaucrats were caught carrying out a felony.

Yet, the question will remain -- will Democrats or the FBI ever undergo any investigation or prosecution for the felonies to which they have admitted guilt, through their apology?

In reality, the FBI has not said that it wiretapped Trump, legally or illegally, and it has therefore not apologized for such actions. As a result, the claim made by OANN in its headline was false.

The statement by FBI Director Christopher Wray to which the report referred was filed before a FISA court in Washington, D.C., on Jan. 10. It can be read in full here. In his "declaration," Wray addressed a major report published by the Justice Department's Inspector General Michael Horowitz in December 2019. That report, which can be read in full here, related to a July 2016/17 FBI investigation code-named "Crossfire Hurricane," which examined potential collusion between Trump campaign associates — in particular Carter Page, George Papadopoulos, Mike Flynn, and Paul Manafort — and Russian government efforts to interfere in the 2016 presidential election.

Horowitz's report examined, in particular, an FBI application for a warrant to conduct surveillance on Page, which the bureau filed with the FISA court in October 2016, and for which it subsequently applied for a renewal on three occasions during 2017. The inspector general highlighted seven "significant inaccuracies and omissions" in the original application, and 10 "additional significant errors" in the renewal applications.

"That so many basic and fundamental errors were made by three separate, hand-picked teams on one of the most sensitive FBI investigations that was briefed to the highest levels within the FBI, and that FBI officials expected would eventually be subjected to close scrutiny, raised significant questions regarding the FBI chain of command's management and supervision of the FISA process ... In our view, this was a failure of not only the operational team, but also of the managers and supervisors, including senior officials, in the chain of command."

The FBI has several different guidelines and protocols that are designed to prevent factual inaccuracies from forming the basis of a FISA judge's decision to issue a warrant for surveillance in the United States. As a result, Horowitz's findings appear, perhaps unsurprisingly, to have caused the FISA court a considerable degree of discomfort.

In December 2019, the FISA judge ordered the FBI to: "Inform the Court in a sworn written submission of what it has done, and plans to do, to ensure that the statement of facts in each FBI application accurately and completely reflects information possessed by the FBI that is material to any issue presented by the application."

In his Jan. 10 declaration, Wray outlined dozens of separate actions the bureau had taken or planned to take, including new trainings as well as reporting, disclosure, and verification processes, intended to prevent a recurrence of the FBI's failures in the Page case. In concluding his statement, Wray wrote:

"The FBI has the utmost respect for this court, and deeply regrets the errors and omissions identified by the OIG [Office of the Inspector General]. The OIG Report and the affiliated Rule 13(a) letters describe conduct that is unacceptable and unrepresentative of the FBI as an institution. FISA is an indispensable tool in national security investigations, and in recognition of our duty of candor to the court, and our responsibilities to the American people, the FBI is committed to working with the court and [Department of Justice] to ensure the accuracy and completeness of the FISA process."

Wray did not exactly "apologize," in his statement, though he did express regret at the FBI's failures in the Page investigation. Contrary to OANN's false claims, Wray certainly did not say that the FBI had wiretapped Donald Trump, either legally or illegally, and he therefore certainly did not apologize for any such actions.

Office of the Inspector General.  "Review of Four FISA Applications and Other Aspects of the FBI's Crossfire Hurricane Investigation."   U.S. Department of Justice.  December 2019.