Did Stalin Say 'America Is Like a Healthy Body with Threefold Resistance'?

Despite how frequently these words are shared in his name, there appears to be no record of Josef Stalin writing or uttering them. 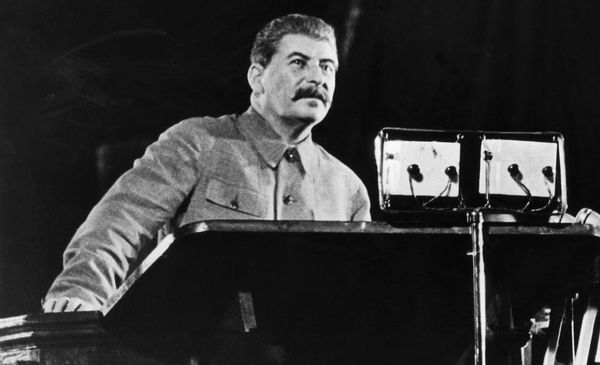 Claim:
Soviet dictator Josef Stalin said, "America is like a healthy body and its resistance is threefold: its patriotism, its morality, and its spiritual life. If we can undermine these three areas, America will collapse from within."
Rating:

One of the forms of political expression that frequently arrives in our inbox for verification is the "evil plan" warning, items which present the notion that some malevolent entity (ranging from Communists to Satan himself) not only expressed an intent to destroy our society from within, but outlined a specific plan for doing so.

A quote attributed to Soviet dictator Josef Stalin that a reader emailed us in November 2011 exemplifies the genre:

"America is like a healthy body and its resistance is threefold: its patriotism, its morality, and its spiritual life. If we can undermine these three areas, America will collapse from within."

The specifics of these plans (no matter how long ago they may supposedly have been formulated) generally relate to current events, and the political purpose of circulating them is to make readers aware that trends which threaten the health of our society are currently in place (i.e., "This is EXACTLY what is happening now!"), and to warn them that we must be vigilant about holding our course and stopping or reversing the encroachment of these socially unhealthful trends. This form has been expressed in such widely circulated items as Paul Harvey's "If I Were the Devil" essay, an (apocryphal) quotation by Karl Marx about the perils of consumer debt, and an (also apocryphal) warning from Abraham Lincoln about the accumulation of vast wealth in the hands of a few.

The putative quotation from Stalin referenced above is another item of this genre, one which presents the concept that Communist enemies of the U.S. viewed patriotism, morality, and spirituality as America's greatest assets and cannily plotted that the U.S. could be made to collapse from within if these values were sufficiently undermined (and which, of course, serves as an admonition to American readers to be attentive in maintaining these values). Whatever level of truth one might find in this sentiment, however, it's highly unlikely that Stalin ever spoke these words.

Proving a negative is often an uncertain proposition, but our reasons for believing this quotation to be of dubious origin are: