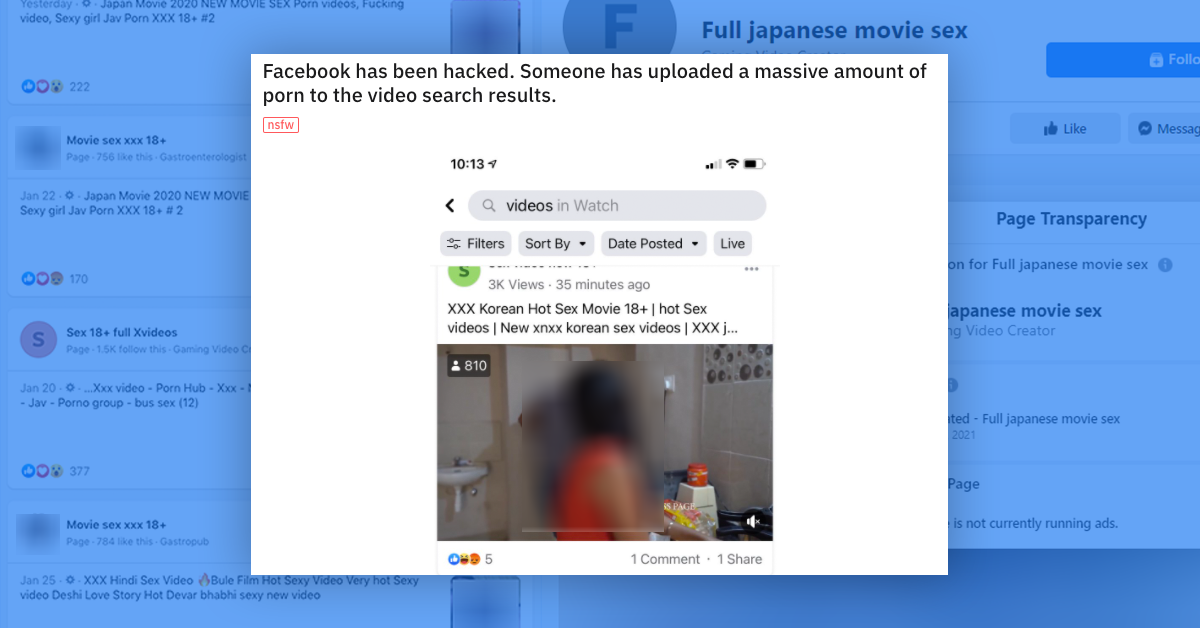 For a window of time around Jan. 22, 2021, a large number of pornographic videos were uploaded to Facebook by pages purporting to represent small businesses. Based on identically named pages identified by Snopes, screenshots of these search results posted to social media appear to be genuine. This period of time roughly follows a large Facebook outage.

While typing a single letter or other words in the search bar may well have triggered pornographic results, their appearance in search results could be the result of a flood of adult content uploaded to Facebook at around the same time, not a specific feature of the search tab.

We do not know how, why, or by whom these videos were uploaded to Facebook, what caused them to show up in search results, or if this incident has any relationship to the outage.

Beginning late on Jan. 22, 2021, Redditors began posting screenshots of Facebook video search results containing — or consisting solely of — pornographic videos. The influx of adult material in search results roughly coincided with a large-scale Jan. 22 Facebook outage described online as a "black out" that saw many users locked out of their accounts. This led some online commentators to suggest a link between the two events. "Some users who managed to regain access to their accounts said that the were bombarded with pornography when looking at the video section of the site," the Daily Mail asserted after the outage. Facebook attributed the problem to "configuration change."

Snopes asked Facebook if it was possible for there to be a link between the "black out" and the influx of adult content; if a massive upload of adult content occurred around this time; and if large amounts of pornographic videos uploaded at the same time could explain the search results. In response, a spokesperson told us only that "after receiving reports of inappropriate content showing up in some searches, [they] investigated and resolved the issue.”

Faced with this set of claims and this opaque partial confirmation of some sort of porn-related occurrence, Snopes attempted to verify that the screenshots shared on Reddit showed, or plausibly showed, authentic Facebook search results. For several reasons, we believe them to be authentic screenshots.

The page Snopes found, created after the screenshot in Reddit was taken, is unlikely to be the same page. However, its presence demonstrates that pornographic results and content in the Facebook video search are, or were, possible. Its similarities to the content shown in Reddit screenshots is suggestive of it being part of a related influx of content. The information provided by Facebook does not allow us to parse these issues further, nor does it address a possible connection to the Facebook "outage." It does indicate, though, that a real pornography-related event happened that required investigation and work to "resolve." For these reasons, and with those related caveats, we rank the claim "Mostly True."

In our email to Facebook, we specifically sent them the "Full japanese movie sex" page as an example. After we received a statement that asserted Facebook "investigated and resolved the issue," Snopes checked to see if the page had been taken down. At the time of this reporting, the page and its content remain live.