A graphic circulating online in March 2018 brought new attention to one of the company's data-gathering tools. 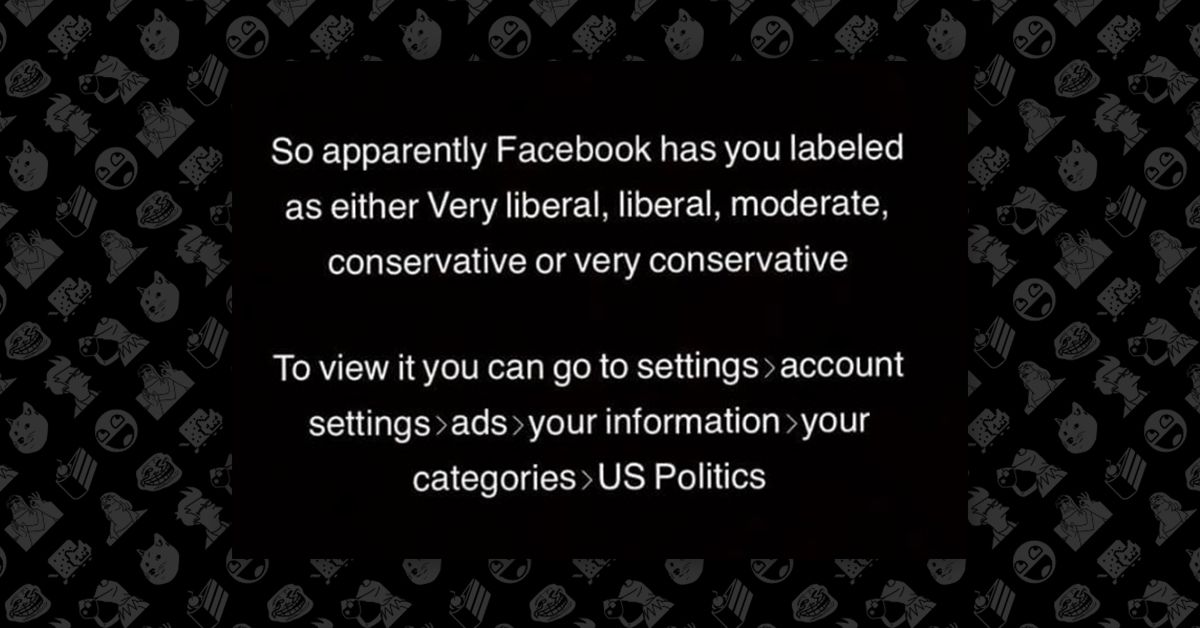 Claim:
There is a section of every Facebook user profile that attempts to list them by political category.
Rating:

In March 2018, amid story after damaging story about data-gathering and electoral manipulation using social media and increasing concerns over misuse of Facebook data for political purposes, a graphic that appeared online in March 2018 brought attention to how that information is tallied:

So apparently Facebook has you labeled as either Very liberal, liberal, moderate conservative or very conservative.

To view it you can go to settings > account settings > ads > your information > your categories > US Politics: This tab does exist as part of the "Your Categories" subsection of users' Ad Preferences tab, which includes the message, "Some of the ads you see are because advertisers are trying to reach people based on information they've provided on their profiles." Clicking on the "Your Categories" tab shows users a separate note:

The categories in this section help advertisers reach people who are most likely to be interested in their products, services and causes. We've added you to these categories based on information you've provided on Facebook and other activity.

The section includes information including the user's birthday; the Internet browser they use to access the site; and the type of network they use:

But while the "Politics" tab exists, it is not a recent addition; it was the subject of news reports as far back as 2016. According to the New York Times, the social media platform often inferred political leanings from otherwise innocuous posts:

Even if you do not like any candidates' pages, if most of the people who like the same pages that you do — such as Ben and Jerry's ice cream — identify as liberal, then Facebook might classify you as one, too.

The same month that the image began circulating online, Facebook CEO Mark Zuckerberg apologized in separate newspaper ads following reports that the data for around 50 million users was leaked to the data firm Cambridge Analytica in 2014. That firm has come under increased scrutiny after revelations by a whistleblower, Christopher Wylie, and a televised investigative report showing Cambridge Analytica officials boasting about being able to "put information into the bloodstream of the Internet" without that information being attributable or traceable to them.

On 28 March 2018, Facebook vowed in a statement to make it easier for users to stop apps from using their data, including the data that will be shown to advertisers.