Does the number of hooves lifted into the air on equestrian statues reveal how the riders died? 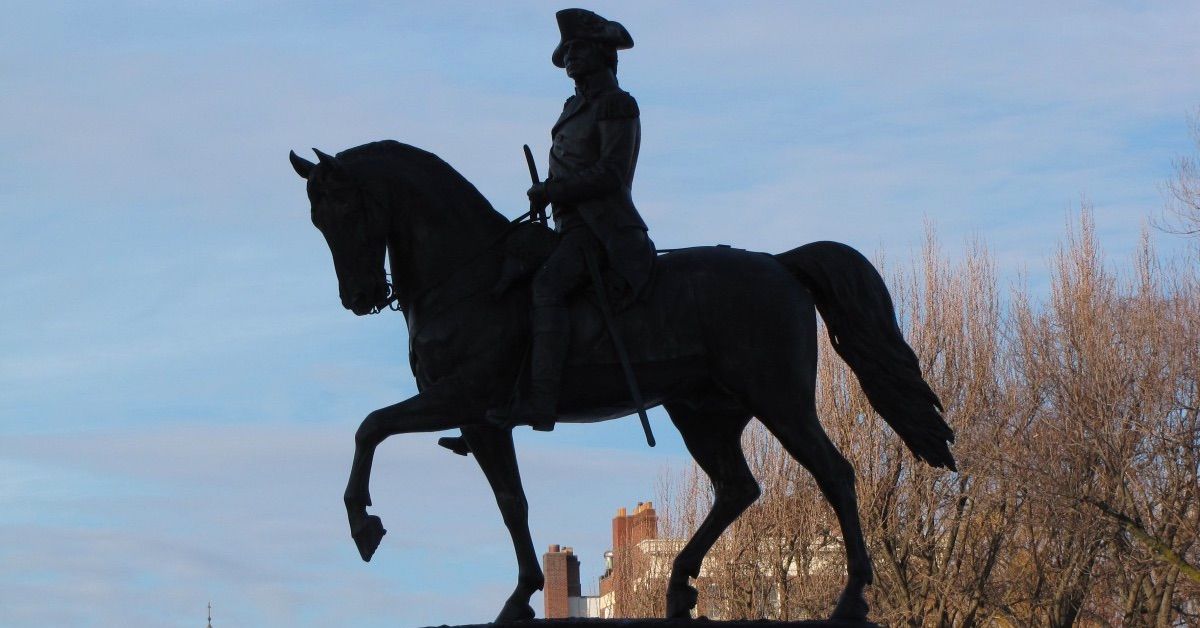 Claim:
The number of hooves lifted into the air on equestrian statues reveals how the riders died.
Rating:

Folk wisdom has it that equestrian statues contain a code whereby the rider's fate can be determined by noting how many hooves the horse has raised. The most common theory has it that if one hoof is raised, the rider was wounded in battle (possibly dying of those wounds later but not necessarily so); two raised hooves, death in battle; all four hooves on the ground, the rider survived all battles unharmed.

The hoof code mostly holds true in terms of Gettysburg equestrian statues, although even that site includes at least one exception: James Longstreet wasn't wounded in this battle yet his horse has one foot raised.

However, even the most cursory look at the statues around other sites, such as Washington, D.C., quickly disproves that the hoof code holds sway in general.

And now some that don't:

An additional rumored statue code is prevalent in Virginia's Monument Avenue in Richmond. The Civil War statues honoring Gens. Stonewall Jackson, Robert E. Lee, J.E.B. Stuart, and Confederate President Jefferson Davis are pointed in distinct directions, according to local lore -- the statues of those who died in the war face north, while the statues of those who survived the war face south.

Upon examination, we find local lore initially appears to have something going for it, but appearances are deceiving. The equestrian statues of Lee, facing south, and Jackson, facing north, do fit the formula, and the horse of Stuart, who was mortally wounded at Yellow Tavern in 1864, faces north. But the heads of Stuart, Davis, and Matthew Fontaine Maury face east.

"To the best of anyone's knowledge, the position and pose of the statue do not signify anything," said Frances Pollard, a curator at the Virginia Historical Society.

Those who should known better continue to pass along this piece of folklore as fact, as evidenced by this July 2001 question and response in Marilyn vos Savant's Ask Marilyn column:

Q: One often sees commemorative statues of soldiers mounted on horses with their forelegs in various positions. Is there any significance to the difference?

A: Yes, although some sculptors may be unaware of the tradition or choose to ignore it. A historian at Arlington National Cemetery explains that when both forelegs of the horse are in the air, the rider died in battle. When only one foreleg is raised, the rider died of his wounds afterward. And when all four legs are on the ground, the rider later died of unrelated causes.

Hmm ... a vocational "tradition" that those who practice the trade are either complete unaware of, or choose to ignore when they do know of it. Given that the alleged statuary code consists of three poses (no hooves raised, one hoof raised, and two hooves raised), the odds that a rider's manner of death would correspond to his horse's pose through plain chance are one in three, which is the proportion we find when surveying the equestrian statues in our nation's capital — that is, only about ten out of thirty statues in Washington, D.C., follow the "traditional" pattern.

(Please don't write to tell us that the odds of a given person's manner of death matching the "correct" statuary code are one in nine, not one in three. The latter is correct.)

The connection between statuary horses hooves' and the manner of deaths of their riders is not "tradition," but — like the well-known but mundane list of "coincidences" between the Lincoln and Kennedy assassinations — an attempt to create an interesting piece of information (in this case, something akin to a "secret code") by finding patterns in randomness through the expedient of simply ignoring or explaining away all the cases that don't fit the pattern. This type of statuary lore is neither new nor unique to equestrian statuary, as a similar "tradition" (i.e., fallacy) was attributed well over a century ago, in the same fashion, to sculptors who had created effigies of knights several hundred years earlier:

Claim: The crossing of the legs and/or arms of the effigies of certain Knights indicates that they were Crusaders and the number of crusades in which they took part.

Mr. Donald Gunn kindly dealt with this matter as follows:
Proof of the error lies in the following facts:

The Rev. C.J. Cox, who, I suppose, was one of our soundest ecclesiologists, wrote:

Surely it is time that the imaginary connection between cross-legged effigies and the Crusades should be exploded; and yet how rampant is that fiction in certain places, and how constantly it has to be contradicted!

[T]he popular fiction that cross-legged effigies are monuments of Knights Templar has evidently arisen from the fact that six out of nine effigies in the Temple Church are so represented ... With the exception, however, of one effigy, which is not cross-legged, it is extremely doubtful whether any of these celebrated figures are memorials of Templars.

Once again, proof that folklore never dies — it simply gets updated in time and place to keep it relevant to modern audiences.