Was an Engagement Ring Hidden in a Necklace for 2 Years?

Viral content websites twisted the truth about a very real love story involving a necklace, an engagement ring, and a hidden compartment. 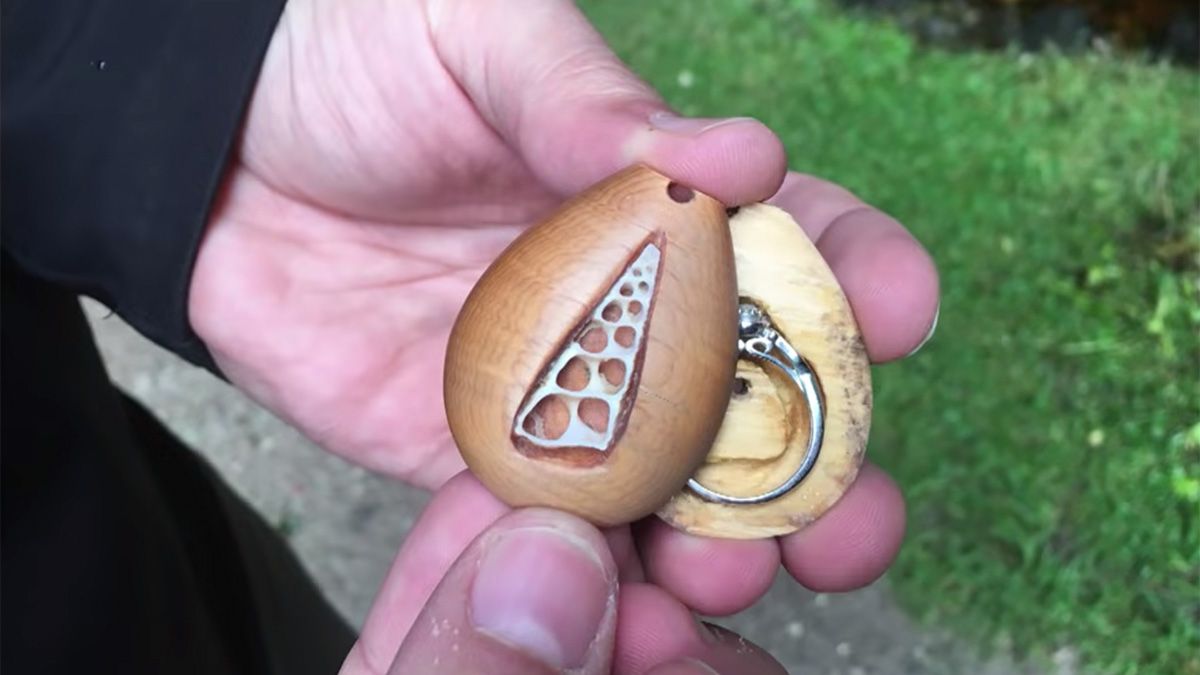 Claim:
A woman named Anna wore a necklace for two years without knowing that her boyfriend, Terry, had hidden an engagement ring inside it.
Rating:

A woodworker named Terry gave his girlfriend, Ana (not "Anna"), a necklace with an engagement ring inside it. She wore it for more than a year before he revealed the ring in a hidden compartment.

Viral content websites seized on the story and twisted the truth. One article, which ran 43 pages long, contained what the couple said were "outright lies and extreme uses of 'artistic license.'" The people who managed the viral content websites led readers to the misleading version of the story with online advertisements in late 2020 and early 2021.

It was a beautiful love story. A woodworker named Terry gave his girlfriend, Ana, a special necklace that he crafted himself. More than a year after Ana started wearing the necklace, the pair visited Smoo Cave in the Scottish Highlands, and it was at this moment in November 2016 that Terry revealed to Ana an engagement ring was hidden in a compartment in the necklace. As Terry proposed to her, Ana knew he had been planning to go down on one knee all along. She said "yes."

This was a true story that involved real people named Terry and Ana: an engagement ring really was hidden inside a necklace that Ana wore for more than a year. (The pair's last names did not appear in news stories after they requested them to be omitted "because of media attention.")

Unfortunately, in late 2020 the tale was seized upon by viral content websites such as FactAhead.com. The website's creators published a 43-page slideshow which forced readers to click "next page" more than 42 times to read the whole story. The site not only twisted the truth behind the couple's tale but also spent money to advertise the misleading article online in late 2020 and early 2021. The ads were hosted by the Taboola advertising platform, which we observed appearing on numerous websites: The strategy behind making a single story take 43 pages to read through is known as advertising "arbitrage." The idea is to bring in more money through ads displayed on each of the 43 pages than it cost to run the initial advertisement that lured readers to the article in the first place.

The misleading version of the story claimed that Ana wore the necklace for two years before Terry showed her what was inside of it, but Ana only wore the necklace for a bit more than a year before the big reveal. Viral-content websites also made baseless claims about the couple's finances, as well as about Ana's purportedly having a fear of flying. One page of the slideshow story identified a photograph as showing one of Ana's friends ("Below a photo of Ana's friend Sofia"), but the picture was merely a stock photograph.

The truthful story about Terry and Ana was covered by credible news organizations in 2017. The BBC, for example, reported the following about the materials Terry used to create the necklace:

Terry made the necklace from Tasmanian Huon pine and the inside of a seashell. It was hollow inside and this was where the ring was hidden.

He gave the necklace to Anna [sic] as a gift to mark the first anniversary of their relationship.

Terry said: "She wore it every day and everywhere we went, and pretty much never took it off."

ABC News also reported that Ana wore the necklace for "more than a year":

Still, she had no idea what was really inside until more than a year later. The travel-loving couple decided to trek to Smoo Cave, located in Durness, Scotland, in April. That's when Terry finally decided to tell Anna [sic] what had been hidden in her beloved necklace.

"Before we actually went down to the cave, I asked if I could have the necklace to take some photos of it among the rocks, which gave me a quick chance to break the seal with a knife," he detailed.

And when Terry went to return the necklace to Anna [sic], he opened it to reveal the engagement ring inside.

His now-fiancée replied, "Wait ... it's been in there the entire time?" And of course, later she said yes to Terry's marriage proposal.

The "Hidden inside the Necklace" YouTube video created by Terry and Ana has been viewed more than 5 million times:

In December 2020, Terry himself addressed the misleading version promoted by viral content websites:

Hello all. If you are finding this video now (Nov/Dec 2020) because you got click-baited into reading a long article that was poorly written and full of ads - Sorry. That article has been published without contacting us, and is full of outright lies and extreme uses of "artistic license."

There are heaps of other SHORT articles that are actually legit from 2017/2018. Anyway, sorry, I hope you didn't waste any 'important' time reading it.

The couple also said that the websites "really really stretched the truth, and flat out made up some stuff."

Despite BBC, ABC News, and other news organizations' publishing the woman's name as "Anna," we confirmed it was spelled Ana, not Anna. Also, BBC reported that the proposal took place in November 2016, while ABC News published that it occurred in April 2017. In fact, the video about the event was uploaded to YouTube in April 2017, but the proposal had happened months earlier, in November 2016. This dating was confirmed by People.com, who assigned a reporter to speak with the couple.

Additional tidbits about the story could be found in the comments for the YouTube video. For example, Terry said he made Ana another necklace since he wasn't able to properly put the original one back together. He also noted that the new one was empty.

Terry observed that he was "paranoid" about Ana's learning of the hidden engagement ring compartment in the original necklace. He was so afraid she'd find out about his plan that he didn't take a picture of that part of the process while he was creating the necklace:

I was so paranoid about Ana finding photos of the ring being hidden in there on my computer/phone/Google Photos, etc, etc, that I didn't take a photo of that particular step. If you look at 0:04, you see a thin white line. I carved the spot for the ring and then glue the 2 pieces of wood together with a thin sheet of paper in between. The glue held it together and the paper acted as a weak point to split it apart later. I split it open once to test it, then I sealed the ring in there and finished it up.

One YouTuber commented that "That necklace is really ugly tho," to which Ana replied, "Perhaps not everyone's taste, but he made it especially for me and I absolutely loved it :)."

Editor's Note: If Terry and Ana would like to correct any part of this story or to add anything, please contact us.