Emmanuel Mensah was a United States Army soldier and immigrant from Ghana who died saving his neighbors' lives during the 2017 Bronx fire. 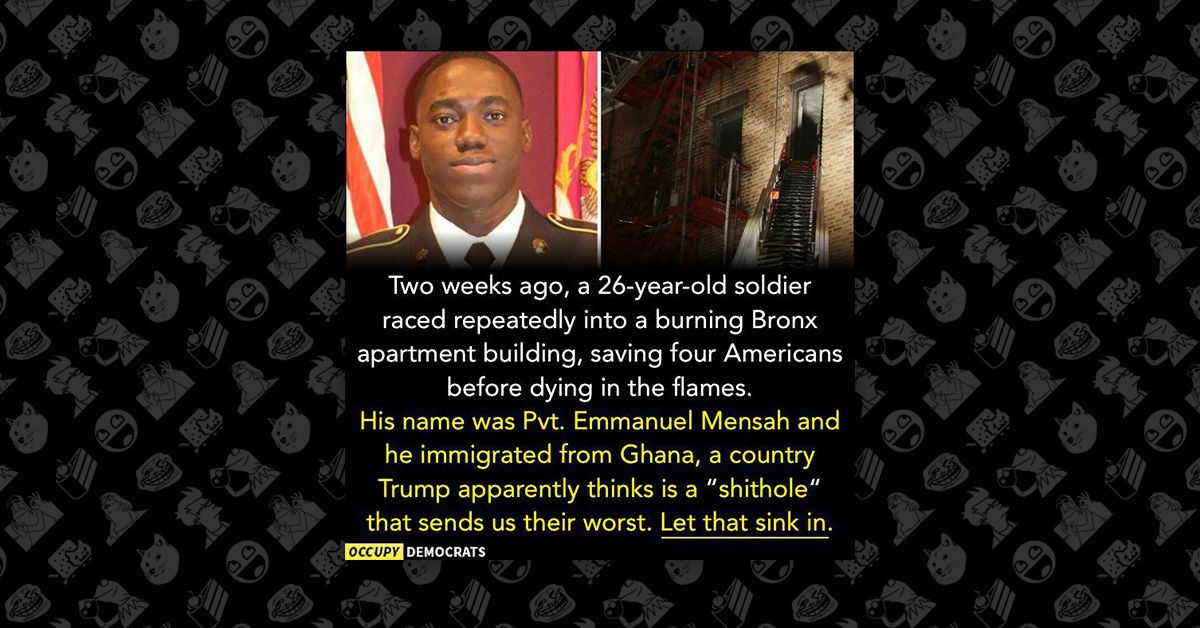 Emmanuel Mensah was an Army private and immigrant from Ghana who lost his life on 28 December 2017, after saving the lives of multiple neighbors during a horrific apartment fire in the Bronx. A 29 December 2017 account of his heroism appeared in the New York Times:

Private Mensah was found in Apartment 15, his uncle said, but he lived in Apartment 11, with a friend of his father’s who was at home with his wife and four children. [He] got that family to safety, then pulled out four more people, his uncle said, before returning to the building. He never emerged; the authorities said he died of smoke inhalation.

Just a few weeks later, Mensah’s story gained renewed interest after President Donald Trump, during a bipartisan meeting about immigration reform, allegedly (and infamously) asked the group: "Why are we having all these people from shithole countries come here?" referring to Haiti, El Salvador and the entire continent of Africa.

After Trump's comments were reported, social media users widely shared Mensah's story as a counterpoint to Trump’s dismissal of immigrants from Africa. A tweet by editor Bill Kristol of the conservative Weekly Standard gave the story both increased exposure and formed the basis for a similarly worded and widely-shared meme:

Two weeks ago a 26-year old soldier raced repeatedly into a burning Bronx apartment building, saving four people before he died in the flames. His name was Pvt. Emmanuel Mensah and he immigrated from Ghana, a country Donald Trump apparently thinks produces very subpar immigrants.

This story is true. Mensah was a Private First Class in the New York National Guard, immigrated to the United States from Ghana, and became a naturalized United States citizen on 21 September 2017, just weeks before his death. His actions during the Bronx fire have been widely reported. New York City's mayor, Bill de Blasio, commended his actions in a 30 December 2017 tweet:

Private Emmanuel Mensah was a first generation immigrant, a soldier, and a New Yorker. He gave his life rescuing his neighbors in the Bronx fire. His heroism exemplifies the best of our city. Rest in peace.

On 1 January 2018, Secretary of the Army Mark T. Esper approved Mensah to posthumously receive the Soldier's Medal, described as the "Army's highest award for heroism that occurs outside of combat." His citation reads:

Private 1st Class Mensah's heroic actions are in keeping with the highest traditions of military heroism and selfless service and reflect great credit upon himself, the New York Army National Guard and the United States Army.

Brimelow, Ben, and Choi, David.   "The Story of a US National Guard Soldier from Ghana Who Died Trying to Save People in a Deadly Bronx Fire Is Being Shared as a Counterpoint to Trump's 'Shithole' Comments."     Business Insider.   12 January 2018.

Ducharme, Jamie.   "A Decorated Soldier Died While Trying to Rescue His Neighbors from the Bronx Apartment Fire"     Time.   31 December 2017.