Was Emma González Filmed Ripping Up the U.S. Constitution?

The outspoken survivor of the Marjory Stoneman Douglas High School mass shooting has been campaigning against gun violence, but not in the fashion seen here. 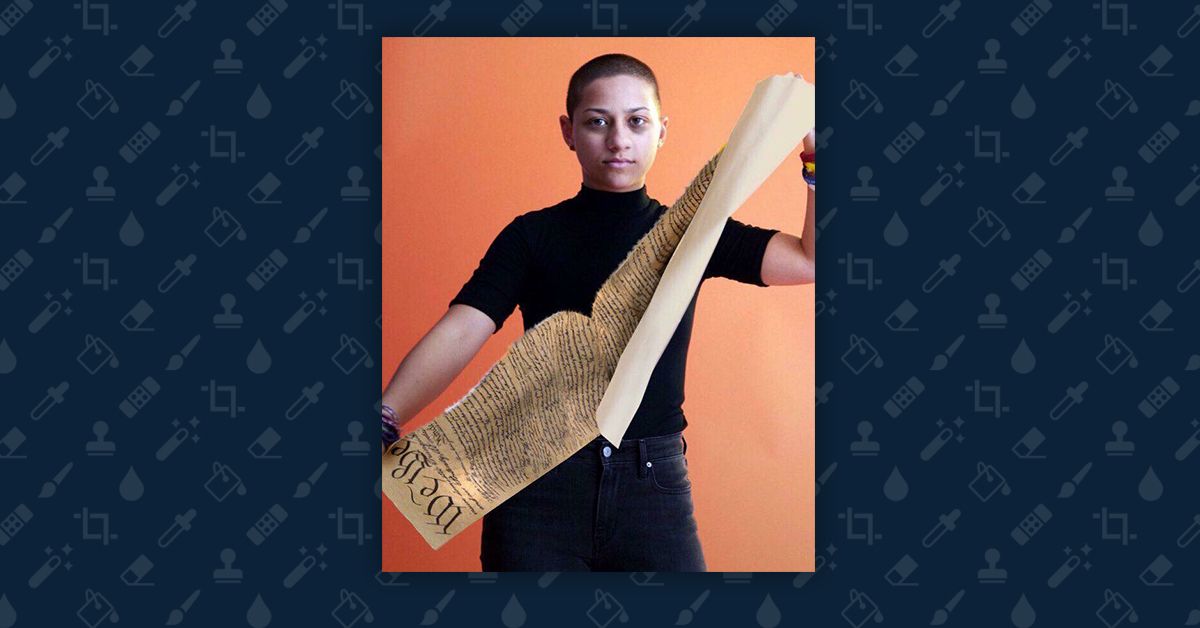 Claim:
Emma González, a survivor of the Parkland school shooting, was filmed ripping up a copy of the U.S. Constitution.
Rating:

Emma González hid in a darkened auditorium at Marjory Stoneman Douglas High School in Parkland, Florida, on 14 February 2018 while Nikolas Cruz was firing on her classmates, eventually killing 17 people. Her name and face became nationally known four days later, after she delivered an angry speech at a gun control rally in Fort Lauderdale:

On 24 March 2018, González took part in the March for Our Lives rally in Washington, D.C., facing the assembled crowd from a stage — mostly silently — for 6 minutes and 20 seconds, representing the amount of time it took the Parkland shooter to kill seventeen people:

Emma Gonzalez, a student and survivor of the Parkland, Florida, stood on stage at the March for Our Lives for 6 minutes and 20 seconds.

"Six minutes and about 20 seconds," she said. "In a little over 6 minutes, 17 of our friends were taken from us, 15 were injured and everyone in the Douglas community was forever altered."

"Everyone who was there understands. Everyone who has been touched by the cold grip of gun violence understands. For us, long, tearful, chaotic hours in the scorching afternoon sun were spent not knowing. No one understood the extent of what had happened."

"No one could believe that there were bodies in that building waiting to be identified for over a day. No one knew that the people who were missing had stopped breathing long before any of us had even known that a code red had been called."

It only took 6 minutes and 20 seconds, Gonzalez said, for a gunman and an AR-15 to extinguish the lives of the 17 students and faculty had died. She repeated the names of each of the victims and the things they would never do again.

Then, she stopped speaking. Silence gripped Gonzalez as tears rolled down her cheeks, and the crowd broke through with random chants. But mostly, silence.

After 4 minutes and 25 seconds, a timer went off.

"Since the time that I came out here," she said, "it has been 6 minutes and 20 seconds. The shooter has ceased shooting and will soon abandon his rifle, blend in with the students as they escape and walk free for an hour before arrest."

"Fight for your lives before it's someone else's job," she said, and left the stage.

Shortly after the March for Our Lives rally, still and animated images were heavily circulated via social media, purportedly showing Emma Gonzalez ripping up a copy of the U.S. Constitution: As multiple sources pointed out, however, these images were digitally manipulated versions of ones taken in conjunction with a TeenVogue op-ed by Emma González about gun control, the originals of which showed González tearing up shooting range targets, not a copy of the U.S. Constitution:

The fact that we even have to clarify this is proof of how democracy continues to be fractured by people who manipulate and fabricate the truth. pic.twitter.com/cpSXnvLxdA

At left is @tyler_mitchell’s photo of @Emma4Change for the cover of @TeenVogue. At right is what so-called “Gun Rights Activists” have photoshopped it into. #MarchForOurLives pic.twitter.com/jW6tTOv2Db