Did Eminem Kneel in Defiance at the Super Bowl?

Controversy is in the eye of the beholder. 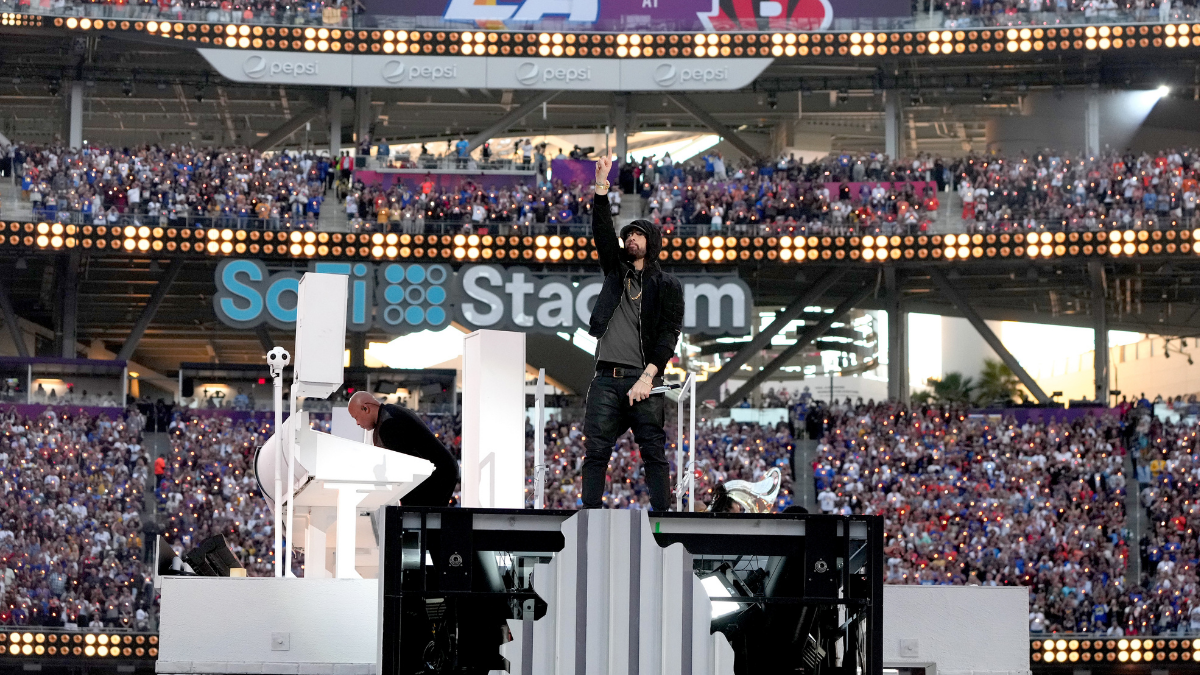 Claim:
Eminem kneeled in protest of police brutality and in defiance of NFL orders not to during the Super Bowl halftime show in February 2022.
Rating:

Eminem did kneel at one point during the halftime show. However...

"Taking a knee" in protest against police brutality typically occurs during the playing of the national anthem, which was not the case here. Furthermore, the NFL has denied that when the performer kneeled it was in defiance of orders not to, saying the league was aware in advance that the gesture would take place and had no concerns.

Neither the performer himself nor the promoters of the show have confirmed that Eminem's gesture was intended as a protest against police brutality or as a reference to Colin Kaepernick.

On Feb. 13, 2022, rappers Dr. Dre, Snoop Dogg, Eminem, singer Mary J. Blige and several other performers took the stage for the halftime show of the Super Bowl. One of the most discussed moments of the show came during a transition between the end of Eminem's performance of "Lose Yourself" and the start of "Still D.R.E." from Dr. Dre and Snoop Dogg. At that moment, Eminem got down on one knee and put his head in his hand. As images of this moment were circulated on social media, they were typically accompanied by two claims: One, that Eminem was kneeling in protest, and two, that the NFL had told him not to kneel at the show.

Did Eminem really kneel in protest? Did the NFL really tell him not to do so? There's scant evidence to support either of these claims.

To Kneel Isn't Necessarily To Protest

Eminem has been a vocal supporter of Colin Kaepernick, the former NFL player who inspired athletes across a wide genre of sports to kneel in support of the Black Lives Matter movement during the opening playing of the National Anthem. In "Untouchable," Eminem rapped:

Just keep marchin', 'til we reach congress
But they're gonna say you're tryin' to take an irrational stance
If you try to slander the flag but
Somebody has to be the sacrificial lamb
So they call it a Kaepernick tantrum
If you don't stand for the national anthem

While Eminem is clearly a supporter of Kaepernick's kneeling protest, that doesn't mean he was protesting at the Super Bowl. One major difference between the protests and the Super Bowl show is that the protests took place during the National Anthem. As Kaepernick said in 2016: "I am not going to stand up to show pride in a flag for a country that oppresses black people and people of color."

Did Eminem Defy the NFL?

The claim that Eminem defied the NFL's request not to kneel is based on a report from Puck News. While Puck News wrote that "the league nixed a plan by Eminem to kneel, Colin Kaepernick-style," no sourcing is provided to back up this claim.

In fact, the NFL said that they were aware that Eminem was going to kneel during the show as he also performed this action during rehearsals.

"We watched all elements of the show during multiple rehearsals this week and were aware that Eminem was going to do that."

McCarthy elaborated in an email to us that this "controversy" was a non-issue for the NFL. The NFL spokesperson said that the league was aware of this moment and that it was "not an area of concern."

McCarthy said: "This was not an area of concern. A player or coach could have taken a knee today and there would not have been an issue."

The fact that Eminem was kneeling during rehearsals suggests this was just a choreographed portion of the show. While it may have been a nod to Kaepernick, it doesn't appear to be a defiant protest. When you watch the halftime show again (and, for a moment, disregard previous kneeling controversies), it appears that Eminem kneels down after his performance in order to shift attention to Dr. Dre at the piano.

While the following tweet carries a misleading caption, you can see Eminem's kneeling moment below. The full halftime show can be viewed here.

Eminem did kneel during one moment at the Super Bowl, but that doesn't mean that he was protesting anything. In fact, since the NFL was aware of this moment as it also happened in rehearsals, it appears that this was more of a choreographed moment as opposed to a defiant one.