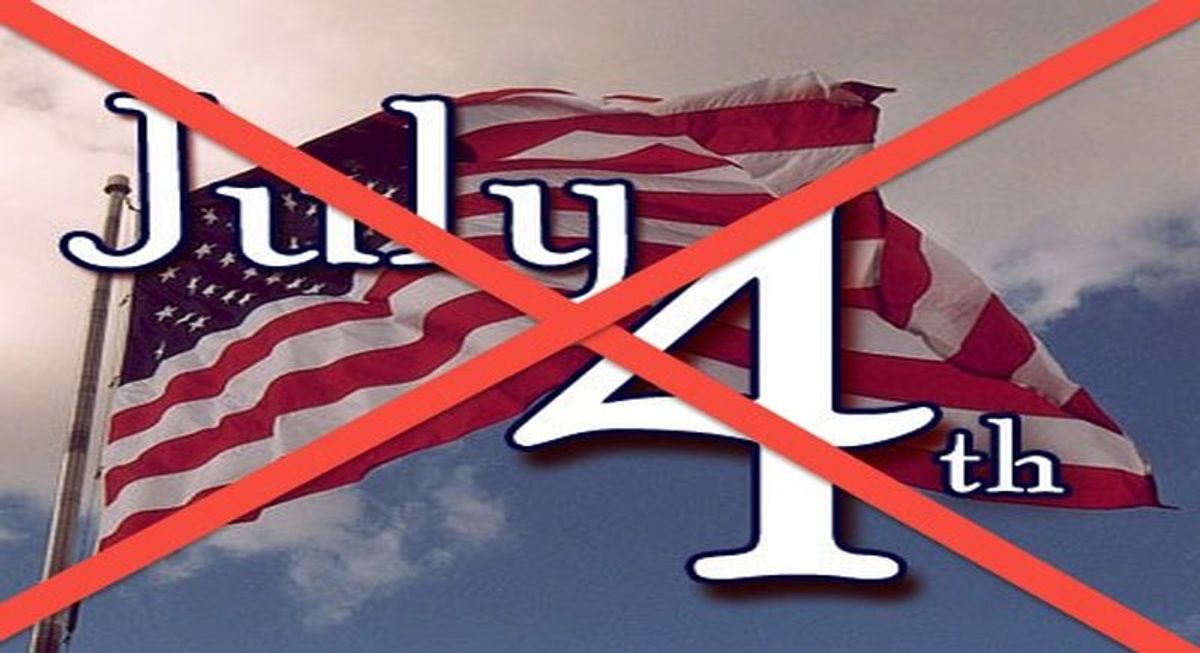 FACT CHECK: Did the U.S. Embassy in Indonesia "remove" their 4th of July festivities in order to avoid offending Muslims observing Ramadan?

Claim:   The U.S. Embassy in Indonesia "removed" their 4th of July festivities due to demands of Muslims who were offended that the date fell during the holy month of Ramadan.

Several sites have been saying that a US embassy moved the 4th of July celebration to June 4th so that it would not interfere with Ramadan in that particular country here are a few links to to those articles. There are more. Is a US embassy sovereign US soil or is it subject to the laws of that country?

Origins:    On 7 June 2015, a number of web sites (including American Thinker and the Federalist Papers) published articles reporting that the U.S. Embassy in Indonesian capital of Jakarta had moved a celebration of America's Independence Day from July to June because its July 4th date fell during the Muslim holy month of Ramadan.

Both articles referenced two sources: A 5 June 2015 article published by the Jakarta Post, and a 6 June 2015 blog post by anti-Islamic commentator Pamela Gellar. The first article was titled "US Embassy Celebrates 4th of July Earlier Out of Respect for Ramadhan" and opened with a lengthy photo caption that contained perhaps the most substantive coverage of the issue: US Ambassador to Indonesia Robert Blake (right), Jakarta Governor Basuki “Ahok” Tjahaja Purnama (left) and People’s Consultative Assembly (MPR) speaker Zulkifli Hasan (second left) cut a cake to mark the anniversary of the 239th US Independence Day at the ambassador’s residence in Jakarta on Thursday. The celebration was held a month ahead of July 4 so as not to disrupt the Ramadhan fasting month, starting later this month, when people will be busier with breaking-the-fast events and prayers.

The article offered a first-paragraph-only mention of the U.S. embassy's rescheduling of July 4th festivities in Indonesia before segueing into a story about the event itself and the Embassy's ongoing interests in that country:

The United States Embassy enjoyed its annual 4th of July celebration on Thursday, June 4, one month early, in order to respect the upcoming Ramadhan month, which will begin on June 17 and last for one month.

By the time Pamela Geller discovered this otherwise unremarkable article in the Jakarta Post, what had up until that point been described as a voluntary, minor scheduling decision based upon local customs took on a new adversarial tone:

Why is it we always have to bend, accommodate, submit? This is Indonesia — always held up as a shining example of a “moderate” Muslim country (despite the sharia — i.e., floggings, whippings, gender apartheid, creed apartheid, etc.)

However, the source article made no mention of any "demands" being placed upon the U.S. Embassy to move their 4th of July celebration, or of any mandates of "Sharia" that prohibited the Independence Day observance from being held during Ramadan: Geller's description injected an antagonistic dynamic not present in the newspaper from which she sourced her post.

The rumor then moved to American Thinker, where all logical sense was stripped away:

In a mind-boggling gesture of official US Government dhimmitude, the US Embassy in Jakarta, Indonesia celebrated our sacred Independence Day holiday on June 4, so as to avoid any conflict with the month-long Ramadan celebration. If you think any Islamic countries — there are 57 of them (not counting ISIS) that count themselves officially Islamic — will move their DC embassy's celebration of Ramadan to accommodate our Independence holiday, I have some bridges to sell you.

(The notion that foreign embassy employees in the U.S. quietly observing religious fasting could somehow impede American Independence Day celebrations, or that an entire calendar month could somehow be "moved" to another time to accommodate a single-day event, defies rational thought. And none of this has anything to do with "dhimmitude," a word discussed in a separate article on this site.)

What's missing from these write-ups is acknowledgement that the size of Indonesia's Muslim population would, as the source article suggested, inhibit the ability of locals or visitors to participate in the embassy's celebration. The impact of Ramadan on Indonesia for non-Muslim residents, guests, visitors, and diplomats is well documented, as noted in the Lonely Planet travel guide's advice to those who plan to be in Indonesia for Ramadan to allow for its inevitable disruptions:

In many places, including the UAE, Morocco, Tunisia, Indonesia and Egypt, daily life changes dramatically this month, giving visitors a chance to see a whole new side to these regions.

Like any holiday, Ramadan affects business as usual and this definitely isn’t the best time to attempt a whistle-stop sightseeing marathon. Many venues operate with limited hours and staff, so try to book accommodation, transport and tours before you arrive.

Similarly, a poster on Stack Exchange's Travel section explained how even those not observing Ramadan are affected by it:

The other travel glitch to beware of is that the end of Ramadan (Eid ul-Fitr, Idulfitri, or Lebaranin Indonesian) is the local equivalent of Christmas, when everybody takes time off and goes back to their families (mudik). This means most transportation is fully booked for several days and even the traffic jams are legendary. Plan ahead so you can avoid travel at this time.

Moreover, nothing about this issue was unique to Indonesia or 2015. U.S. Embassies in other countries shifted their Independence Day celebrations in previous years so as not to coincide with Ramadan — all without drawing outraged comments from bloggers: The U.S. Embassy in Jakarta held Independence Day festivities one month early (on 4 June 2015) this year due to the approach of Ramadan, but nothing indicates that decision was made under any pressure, threat, demand, coercion, or other claim "offense" by Muslims rather than being a simple recognition of the cultural and logistical difficulties posed by the July 4th overlap with the Muslim holy month.