Right-leaning observers took aim at Missouri Democrat Emanuel Cleaver after the opening of the first session of the 117th Congress in January 2021. 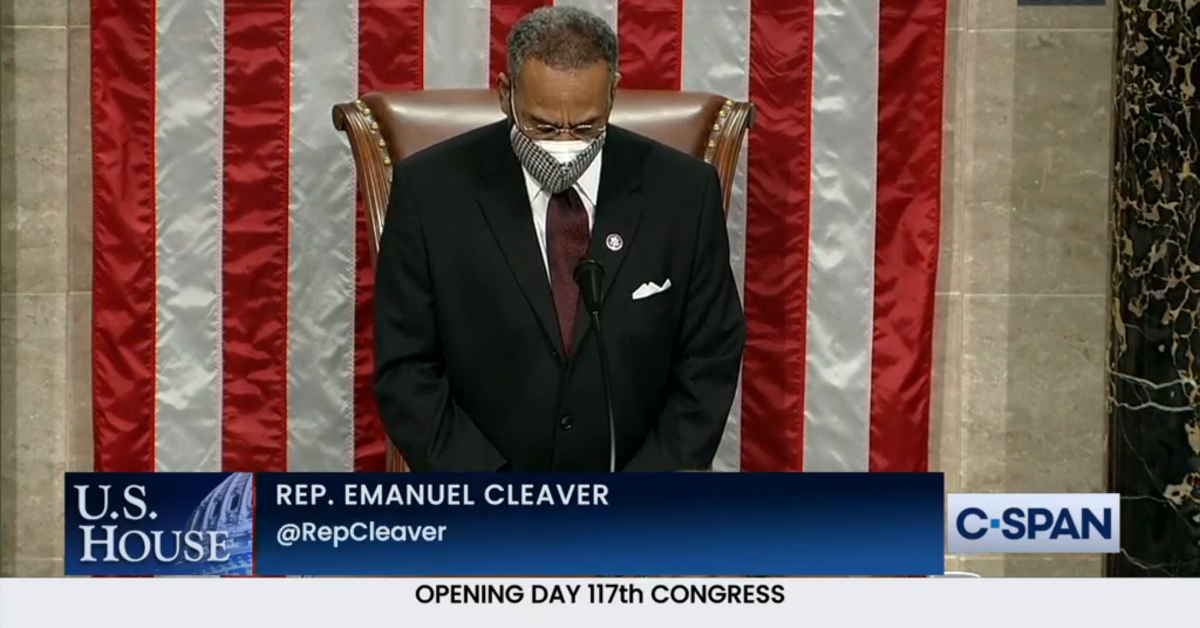 Claim:
In January 2021, U.S. Rep. Emanuel Cleaver added "A-Woman" after the traditional "Amen" in a prayer to open the 117th Congress.
Rating:

In January 2021, as the 117th Congress convened for the first time, right-leaning observers and politicians responded with a mixture of outrage and bemusement, claiming that a Democratic Congressman had added "A-Woman" to the traditional "Amen" at the end of a prayer to open the first session of the new House of Representatives.

U.S. Rep. Guy Reschenthaler, R-Pennsylvania, tweeted a short clip from the prayer, which was given by U.S. Rep. Emanuel Cleaver, D-Missouri, adding:

The prayer to open the 117th Congress ended with "amen and a-women." Amen is Latin for "so be it." It's not a gendered word. Unfortunately, facts are irrelevant to progressives. Unbelievable. Those tweets accurately described Cleaver's use of the phrase "A-Woman" during the prayer at the opening of the new session of Congress, and the video footage that showed the relevant section from the prayer, although obviously cut from a longer set of remarks, was not digitally altered and did fairly represent what Cleaver said.

Cleaver, who is a United Methodist Church pastor, made the remarks during the opening session of the 117th Congress, on Jan. 3, 2021. The full prayer can be viewed below. In the relevant section, toward the end of the prayer, Cleaver said:

Now may the God who created the world and everything in it bless us and keep us. May the Lord make his face to shine upon us and be gracious unto us. May the Lord lift up the light of his countenance upon us and give us peace — peace in our families, peace across this land and, dare I ask, oh Lord — peace even in this chamber, now and ever more. We ask it in the name of the monotheistic god, Brahma, and god known by many names by many different faiths. Amen and A-Woman. [Emphasis is added].

Snopes asked Cleaver why he had chosen to add the non-traditional sign-off to his prayer. In a statement, Cleaver said his use of "A-Woman" was a "light-hearted pun" that had been "misconstrued":

I am deeply disappointed that my prayer has been misinterpreted and misconstrued by some to fit a narrative that stokes resentment and greater division among portions of our population. I believe prayers to be a personal conversation between El Shaddai and the invocator. With this conversation, in the presence of the 117th House of Representatives, I concluded with a light-hearted pun in recognition of the record number of women who will be representing the American people in Congress during this term as well as in recognition of the first female Chaplain of the House of Representatives whose service commenced this week. I personally find these historic occasions to be blessings from God for which I am grateful.

Rather than reflecting on my faithful requests for community healing and reversion from our increasingly tribal tendencies, it appears that some have latched on to the final word of this conversation in an attempt to twist my message to God and demean me personally. In doing so, they have proven one point of my greater message—that we are all “soiled by selfishness, perverted by prejudice and inveigled by ideology ..."