Elongated Skulls Found in Peru Could Be Aliens?

Coneheaded human skulls found in Latin America are not from aliens, but from an ancient culture that practiced artificial cranial deformation. 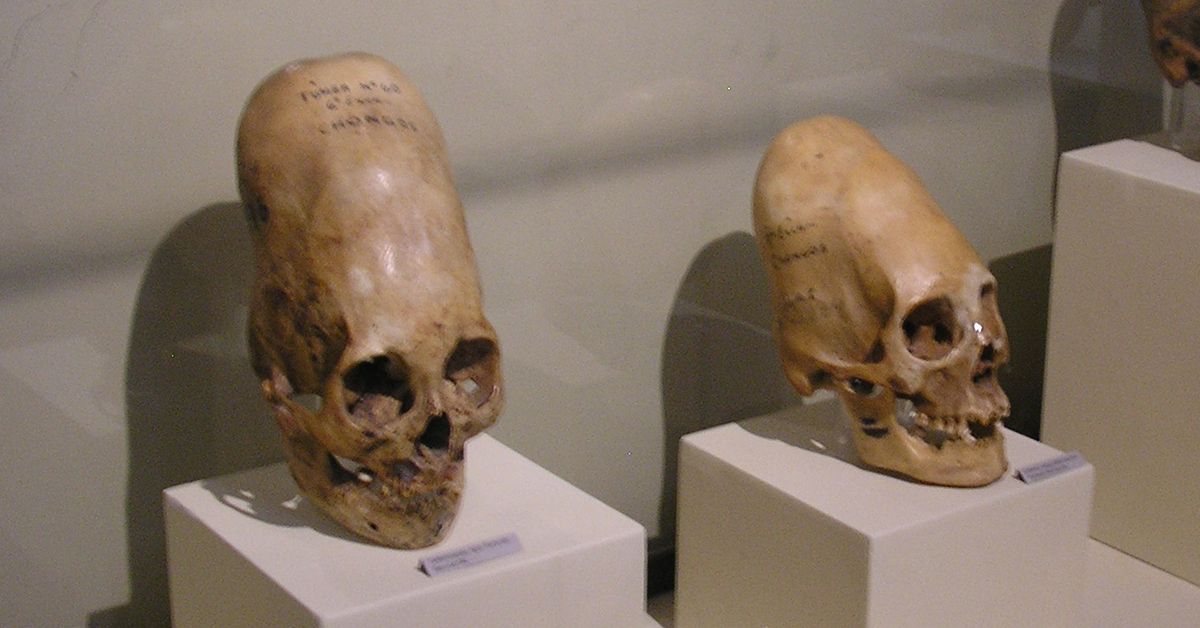 A story has been circulating around alien and UFO conspiracy web sites since 2014, alluding that DNA tests done on cone-shaped skulls found in the Paracas region of Peru show they are of extraterrestrial origin. The strange appearance of the skulls coupled with the outlandish claim continues to give the story legs, and it continues to make the rounds as of mid-January 2017:

The director of the Paracas Museum of History sent five samples of the Paracas skulls to undergo genetic testing, and the results were mesmerizing. The samples which consisted of hair, skin teeth and some fragments of cranial bones gave incredible details that have fueled the mystery surrounding these anomalous skulls. The genetic laboratory to where the samples were sent was not informed of the origin of the skulls in order to avoid ‘influenced results.’

Interestingly, the mitochondrial DNA, which is inherited from the mother, showed mutations that were unknown to any man, primate or animal found on planet Earth. The mutations present in the samples of the Paracas skulls suggest that researchers were dealing with a completely new ‘human-like being,’ very different from Homo sapiens, Neanderthals or Denisovans.

The announcement in 2014 that the skulls had non-human DNA was originally promoted by Brien Foerster, a figure known for pseudoscience. As RationalWiki notes:

Foerster has little in the way of relevant scientific qualifications but runs a tour company and was a regular on the very unscientific History Channel show Ancient Aliens, the museum is a private company owned by a man with no scientific qualifications, not an academic institution, and the results were announced not in a peer reviewed journal but on Facebook. Suspiciously, the geneticist who supposedly conducted the tests refused to own up and his or her identity was kept secret by Foerster.

The elongated shape of the skulls is most likely due to a practice known to anthropologists called "artificial cranial deformation."  This has been practiced in a number of cultures from a wide variety of geographies, going back millennia:

Experts speculate that the widespread tradition could stem from a host of motivations, not the least beauty. The latest hypothesis to join the list, however, is the belief that skull shaping could have been a boon for survival to some who practiced it, as proposed by Marta Alfonso-Durruty, an anthropologist at Kansas State University, and colleagues in a new research paper published in the American Journal of Physical Anthropology.

The team examined 60 skulls from a group of hunter-gatherers that lived in Southern Patagonia and Tierra del Fuego 2,000 years ago, Hogenboom writes. Thirty percent of the skulls showed signs of intentional deformation, the first evidence that people in Patagonia practiced such modification, which could have become widespread because, like tribal tattoos or team jerseys, it promoted group cohesion. Unlike clothing, however, body modification permanently differentiates in-group members from outsiders.

In Patagonia however, the hunter gatherers with modified skulls lived in more diffuse groups, created by the need to move from place to place in search off food in a resource-scarce region. Building relationships with individuals to gain access to certain areas would have been valuable. Modified skulls could have served that purpose, signaling a trusted, connected person.

The Paracas skulls are on display at the National Museum of Archaeology, Anthropology and History in Lima, Peru, and were first discovered in the 1920s by Peruvian archaeologist, Julio Tello. They are an apparent source of interest to paranormalists who search for signs of extraterrestrial or Biblical phenomena. Some web sites put forward the claim that the skulls belong to nephilim, Biblical creatures that, according to Genesis, were the offspring of gods and human women.

This is not the first time a discovery of human remains with elongated skulls sparked the hopes of UFO enthusiasts. A 2015 discovery of a prehistoric woman in Russia, at a site known as Arkaim or "Russia's Stonehenge," with a similar deformity also created a buzz:

Some believe that the skull's high forehead is characteristic of the so-called "alien grey" often depicted as large-eyed and large-foreheaded beings in sci-fi films and even hoaxes.

Archaeologists, though, are not convinced of the alien theory, saying that the bones belonged to a human who lived about 2,000 years ago.

The scientists who shared photos of the discovery said that the body was likely from the second or third century after Christ. They also have a good explanation for the conehead skull.

Archaeologists claim that the remains belonged to a woman from a 4,000 BC settlement, and the shape of the skull can be attributed to a tradition of the tribe that she belonged to.

The Paracas culture was one of the ancient Andean villages that practiced skeletal modification. They wrapped their babies' heads with rope, cloths and wooden boards in order to lengthen their skulls. This was done for spiritual or religious reasons, and scholars believe that it was an effort to look more like their deities.

The web site delves into what may have caused the vague genetic abnormality supposedly found by Foerster's investigation:

At best it is not conclusive. DNA was identified as human, but with abnormalities; Anomalies that could be caused by any number of contaminants or defects in the process. It could be that this DNA actually provides unusual results, but the only thing that can be said about it at this point is that it requires more study. The sensational launch of unconfirmed and unverifiable information like this on a radio show is not worthy of the attention this story is receiving.

We found no credible academic sources or publications corroborating the claim that DNA taken from the skulls found at Paracas was not human in origin or abnormal enough to warrant further study. The practice of purposely elongating skulls is well known to anthropologists, and while academics may debate the motivation certain societies had for doing it, there is no scientific debate over whether those societies were human.