The claim about the Massachusetts Democrat originated with a fake news web site and an unrelated image. 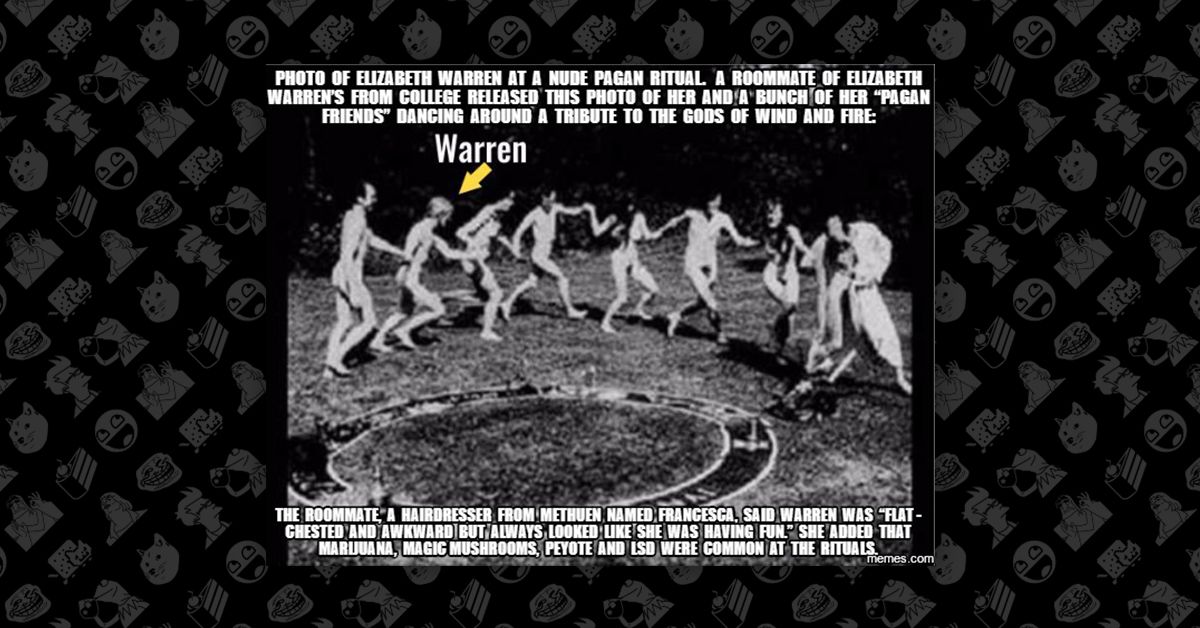 In June 2017, a blurry black and white image showing a group of nude people dancing around a circle appeared with text claiming that it shows Sen. Elizabeth Warren (D-Massachusetts) performing a pagan ritual: The roomate, a hairdresser from Methuen named Francesca, said Warren was "flat-chested and awkward but always looked like she was having fun." She added that marijuana, magic mushrooms, peyote and LSD were common at the rituals.

The text included with the image was originally published in a hoax article on TheLastLineOfDefense.org, a web site with a long and storied history of posting factually challenged stories. To its credit, the web site does carry a clear disclaimer:

Although we have not been able to definitively determine a time and place for the photograph, several sources claim that it shows a man named Alex Sanders (far right in the robe) leading a "skyclad ritual" somewhere in the United Kingdom. Sanders, who was known as the "King of the Witches," founded Alexandrian Wicca in the 1960s:

Sanders was a born showman who avidly courted publicity. In September of 1962 he even succeeded in convincing the Manchester Evening News to run a front-page article about Wicca. As a result he soon attracted a large following. During this period Sanders and his coven worked from his home at 24 Egerton Road North, Chorlton-cum-Hardy, Manchester. One of his initiates was "Maxine Morris", a Roman Catholic 20 years his junior. After her initiation, they handfasted and she became his High Priestess. They were married in a civil ceremony in 1968 and moved into a basement flat near Nottinghill Gate, London. Later that same year, Maxine bore him a daughter they called "Maya".

From their new home the Sanders’ ran his London coven and taught training classes, he claimed to have initiated more than 1,623 witches working in 100 covens around the country, all-practicing what had become known as the Alexandrian Tradition. At one meeting, a gathering of sixteen of his covens, Sanders was bestowed with the title of “King of the Witches”. Sanders frequently appeared in ritual photos as robed or wearing only a loincloth while Witches surrounding him were naked. His explanation for this was that the old “Witch laws” required that the Elder of a coven should be easily identifiable from the other coven members.

Alex Sanders and his wife later consulted on the 1966 movie Eye of The Devil. A photograph of Alex, Maxine, and the film's star Sharon Tate appears to show a circle similar to the pagan ritual shown above:

Elizabeth Warren did enter college in the 1960s; she was born in 1949, and then accepted into George Washington University at just sixteen years old. She put her college career aside after just two years, however, dropping out to marry a NASA engineer she had been dating throughout her teens, then moving with him from job to job: she finished her undergraduate degree in Houston, taught elementary school, and then enrolled in law school at Rutgers, earning her J.D. when she was nine months pregnant and then going directly into law, then academia, with her new baby in tow.

Nothing in her history suggests she ever practiced Wicca or danced "skyclad" in cabalistic and obscure rituals, or had the time to do so. But speculation is unnecessary; people change their haircuts throughout their lives for one reason or another, and images of Warren from that time in her life clearly show someone with long dark hair: Warren had her first child at age 22, and hair requires months, if not years, to grow to the length it appears in this image. The image used in this meme had nothing to do with Warren, and the meme itself is easily debunked by the barest of Google searches.