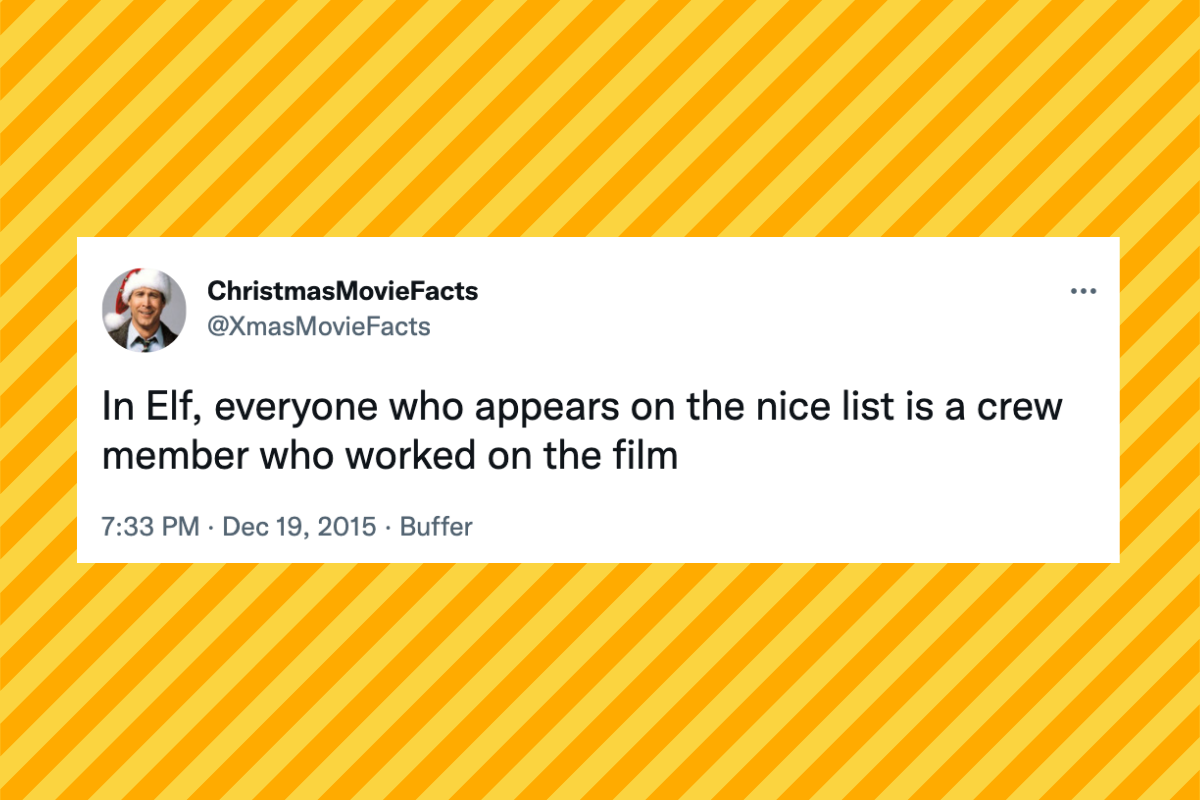 Claim:
In the holiday movie “Elf,” every name that appears on the “nice list” is a crew member who worked on the film.
Rating:

As he sits at the dinner table, Buddy the elf told his newly found biological father how he came to find himself in the Big Apple.

“I passed through the seven levels of the candy cane forest, through the sea of swirly-twirly gum drops, and then I walked through the Lincoln Tunnel,” he described of the supposed 3,500-mile journey he made by foot.

While Buddy is a fictional character played by actor Will Farrell, a list of real names appears as part of the plot in the film. That’s because five names that appear on the “nice list” at the end of the movie represented real people who worked on the film crew.

The claim made its first appearance on Dec. 19, 2015, when it was posted to Twitter by the account ChristmasMovieFacts, handle @XmasMovieFacts, and made a resurgence in late 2021 when a screengrab of the tweet was shared again to social media by popular accounts, including @iamthirtyaf on Instagram.

To confirm whether this claim was true, Snopes sat down in front of the fireplace and watched the holiday classic — nobody said journalism was glamorous work. We confirmed that at the 1 hour, 21-minute mark, Santa displays the “nice list." The names on the list included the names of Victoria Down, Drew Davidson, Andreas Nieman, Nathan Tichenor, Michael Hobbs, Jimmy Miller, and Penny Gibbs. We checked this list against the Internet Movie Database (IMDb) list of cast and crew members and determined that nearly every name on list did, indeed, work on the film.

Victoria Down is a makeup artist whose work has appeared in “Godzilla,” “Army of the Dead,” and “War for the Planet of the Apes” — and of course for her role in “Elf.” Also known as Andrew, Drew Davidson was the chief lighting technician while Andreas “Andy” Nieman was the assistant property master responsible for props. Nathan Tichenor was listed as the co-production coordinator, Jimmy Miller was the executive producer, and Penny Gibbs was a production manager.

The 2003 film tells the story of Buddy, who was not really an elf. After learning that he was adopted by a Papa Elf and spent his life working in Santa’s North Pole workshop, Buddy walks to New York City to find his biological father. (Spoiler alert: his real dad was on the “naughty list”.)

If you want to double-check for yourself, “Elf” can be streamed throughout the holiday season on HBO Max.