Did Clint Eastwood Say Obama Was the “Biggest Fraud Ever Perpetrated on the American People”?

Eastwood made something approximating this remark in 2012, following his appearance in support of Mitt Romney at the Republican National Convention. 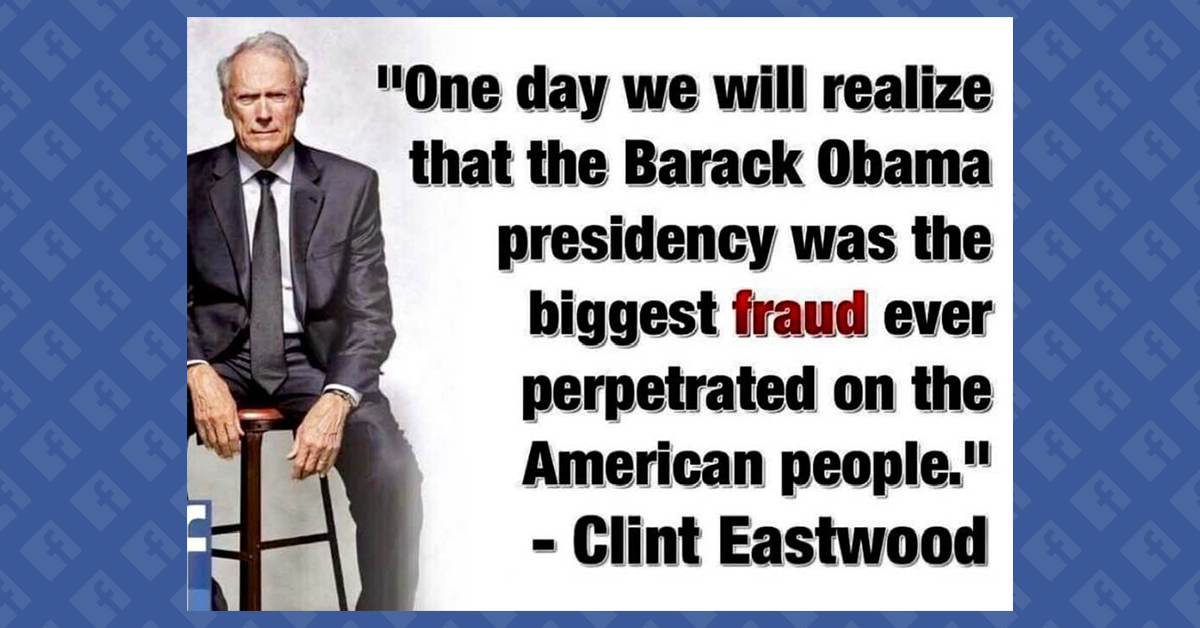 Claim:
Clint Eastwood said "one day we will realize that the Barack Obama presidency was the biggest fraud ever perpetrated on the American people.”
Rating:

Actor and director Clint Eastwood has long been critical of the left in American politics, and is considered as an icon by some on the right for being one of the rare outspoken political conservatives in Hollywood. As a result, his words (or at least close approximations of them) often appear on pro-Trump Facebook pages.

One entry from the “close approximation" camp is found in a meme posted the Facebook group “Donald Trump for President 2020!!!!!!” that purportedly reproduced an Eastwood comment about President Obama: Although Clint Eastwood did not say these words exactly as stated in the meme, they appear to be a reasonably close paraphrase of comments he gave to the Carmel Pine Cone (the local newspaper of the California town for which Eastwood once served as mayor) following his controversial and meandering improvised "empty chair" speech at the 2012 Republican National Convention. In that article, Eastwood reflected on the criticism of his speech (emphasis ours):

After a week as topic No. 1 in American politics, former Carmel Mayor Clint Eastwood said the outpouring of criticism from left-wing reporters and liberal politicians after his appearance at the Republican National Convention, followed by an avalanche of support on Twitter and in the blogosphere, is all the proof anybody needs that his 12-minute discourse achieved exactly what he intended it to.>

“President Obama is the greatest hoax ever perpetrated on the American people,” Eastwood told The Pine Cone. “Romney and Ryan would do a much better job running the country, and that’s what everybody needs to know. I may have irritated a lot of the lefties, but I was aiming for people in the middle.”

Although the meme added some text and replaced “hoax” with “fraud” and “the Obama presidency” with “President Obama,” the primary meaning remained unchanged.