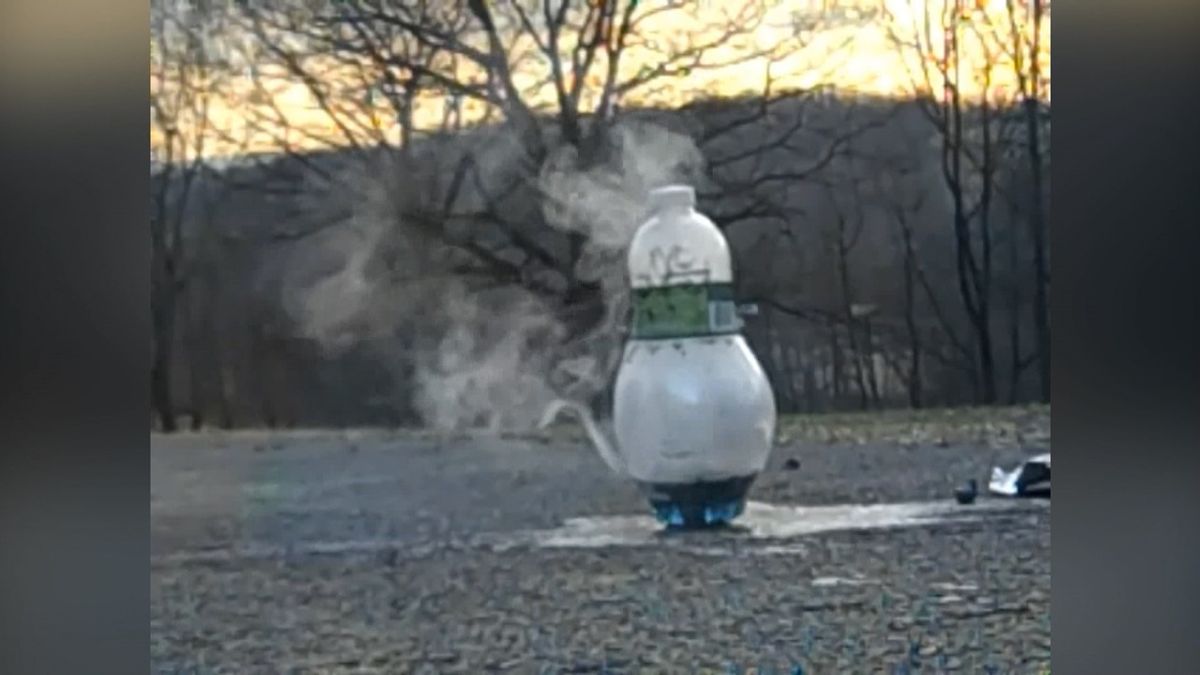 "Bottle bombs" (also commonly known as "Drano bombs" or "works bombs") are not a new phenomenon; they've been a favorite of youthful pranksters for decades, as their construction requires only a few ordinary, commonly available components: plastic soda bottles, aluminum foil, and Drano (or other brand of household drain or toilet cleaner):

Good morning to you all. I want to make you aware of a recent incident that occurred this morning in York Twp. This type of incident directly affects your safety as well as your children's safety. This morning, at approximately 8:00 am, I was dispatched to an address, on Bemis Rd near the Saline City Limits, for an unexploded pop bottle bomb. When I arrived, I noticed a 20 ounce pop bottle, on the ground, in the callers front yard. After I inspected it closer, I determined that it was in fact a "Works" Bomb. I was able to clear the device away from the house and once I moved it, it detonated itself within 30 seconds. After leaving that house, I checked other yards in the area during my patrols. I located a second one, just a few doors down from the first one. As I took care of the disposal/detonation, the homeowner came out and asked me what it was. When I showed her what it was, she immediately told me that she saw the bottle and that she had planned on picking it up when she got her morning paper. Like the first one, once I moved it, it detonated in short order. There was a high probability that this would have detonated in her hand/face while she carried it to the trash.

A "Works" Bomb is Drain-o and Tin Foil, mixed together inside of a bottle. The chemical reaction between the Drain-o and the Tin Foil makes a volatile build up of gases and subsequently detonates the bottle with a great amount of force. Once the detonation occurs, the chemical substance that is in the bottle is actually boiling liquid.

The amount of force that is generated at the time of the explosion is enough to severe fingers and also deliver 2nd and 3rd degree chemical burns to the victim. The chemicals can possibly cause blindness and the toxic fumes can be harmful.

**SAFETY**SAFETY**SAFETY***..........When you are out and about in your yards, please be mindful of these devices. If your picking up your morning paper, or mowing your grass, or if you let your children out to play; whatever your activities are, please use the following precautions.

1) If you find a soda bottle or any other bottles, examine it carefully before you touch it or get near it. If it shows signs of swelling, or
melting in any way, DO NOT TOUCH IT! Call 911 and let us respond to take care of it.

2) If you find a soda bottle that has any liquid in it, DO NOT TOUCH IT! Call 911 and let us respond to check it / dispose of it.

Both bombs this morning appeared to be slightly swollen, with a dark colored liquid, inside of it. This liquid could have easily been mistaken for left over soda.

I know that calling 911 for a soda bottle may sound silly or like a misuse of your Police protection but trust me, it is not. You do not want one of these devices detonating in your hand or your children's hands or in your pets face. We are here to incur the danger for you so that you are and your loved ones are not harmed. So please check your yard thoroughly before letting your children out to play and be mindful before you just deem that soda bottle as garbage and pick it up.

In general, one need simply push some aluminum foil balls into a plastic bottle, add some Drano, and screw the cap tightly onto the bottle to create a Drano bottle bomb. The combination of the hydrogen chloride or sodium hydroxide in the fluid and the aluminum foil creates a strong chemical reaction which releases hydrogen gas; when that gas builds up to sufficient pressure, it ruptures the side of the plastic bottle, releasing the contents in an explosive burst:

Although the force of pressure-based bottle bombs may seem small when compared to other types of explosives (such as gunpowder-based ones), any form of explosive has the potential to cause serious injury, and since bottle bombs have no conventional fuse they can be dangerously unpredictable, exploding earlier or later than their wielders expect. (Aluminum foil is typically coated with a layer of wax, so it can take up to ten minutes or so for the fluid to strip away the wax and react with the aluminum foil, enhancing the chances that a soon-to-explode bottle bomb may be picked up by an unwary passer-by.) Additionally, the caustic cleaning agents used in bottle bombs can cause severe burns when they come into contact with skin (either through spillage in the construction of the bombs or through being sprayed widely in the resulting explosions) and produce toxic fumes.

The above-quoted e-mail warning about neighborhood residents discovering undetonated bottle bombs in their yards was sent out by Washtenaw County Sheriff's Deputy Keith Mansell in April 2010 after he discovered two Drano bombs left in the yards of residents of York Township, Michigan. For the most part, those who concoct bottle bombs mix the ingredients, immediately set their work aside, and stand back to watch it explode within a minute or two. However, there are ways of delaying the mixture and/or reaction of the ingredients so as to cause a delayed detonation, so those who discover objects that appear to be bottle bombs should refrain from handling them and contact authorities for removal.

At about the same time as Deputy Mansell's warning hit the Internet, the town of Methuen, Massachusetts, experienced a rash of similar plastic-bottle bomb placements, including two that blew apart mailboxes:

A rash of homemade plastic-bottle bombs used to blow up mailboxes has prompted arson investigators and the state police fire marshal's office to offer up to a $5,000 reward for information leading to the conviction of anyone responsible for making and setting off the incendiary devices.

[Methuen police arson investigator Matt] Bistany said [a plastic bottle a resident discovered sticking out the front of her mailbox] is at least the third device of its kind found in the neighborhood in the last few weeks, although in the two other cases, the bombs actually succeeded in blowing apart the mailboxes.

Barry said the bombs, made up of typical household chemicals poured into plastic bottles and then sealed shut with the cap, can be very powerful.

"We take these very seriously," he said. "Kids have lost their fingers and had their faces injured from these things. It's very serious."

Some more cases of bottle bomb discoveries include one such item found on an Oregon elementary school playground on 18 February 2013:

A chemical-based bottle bomb, mixed inside a Gatorade container, was discovered on the playground of Periwinkle Elementary School, and the Oregon State Police responded to destroy the device, according to Albany Police Department reports.

A caller reported the Drano bottle bomb, which was under the covered play structure, to 911.

The OSP bomb squad arrived, detonated the bottle and seized it as evidence. The bottle has been sent to the Oregon State Police Crime Lab for testing.

A woman residing in Wichita, Kansas, called police on 16 February 2013 after someone detonated bottle bombs nearby:

When officers arrived on the scene, they found the remnants of chemical bombs in melted two-liter pop bottles. The bomb squad was then called, according to Wichita police Sgt. Bart Brunscheen, to dispose of the contents.

"This is a serious crime and anybody near it could be injured," he said.

Also in February 2013, police in Beavercreek, Ohio, warned residents about a recent rash of Drano bottle bomb incidents in the community:

Beavercreek Police are investigating their 7th pop bottle bomb incident and now they're asking for your help. Police warn that these devices are extremely dangerous. So far, no one has been hurt but they say it's only a matter of time.

The incidents have taken place in the Hunter's Ridge, Christalee Acres and Oakbrook Chase Estates neighborhoods. The most recent incident happened at the intersection of Oakbrook Boulevard and Adams Way. Police found two pop bottle bombs and disposed of them safely. They say there are no witnesses.

This investigation began on December 13th of last year. Since then, police have found several of these devices and the Dayton Bomb Squad has been called to detonate some of them. If you find a similar device, you're asked to call 9-1-1 immediately, and do not try to pick it up or move it.