Whoever that person on the viral call may be, you should know Canadian medical organizations have released statements refuting his comments. 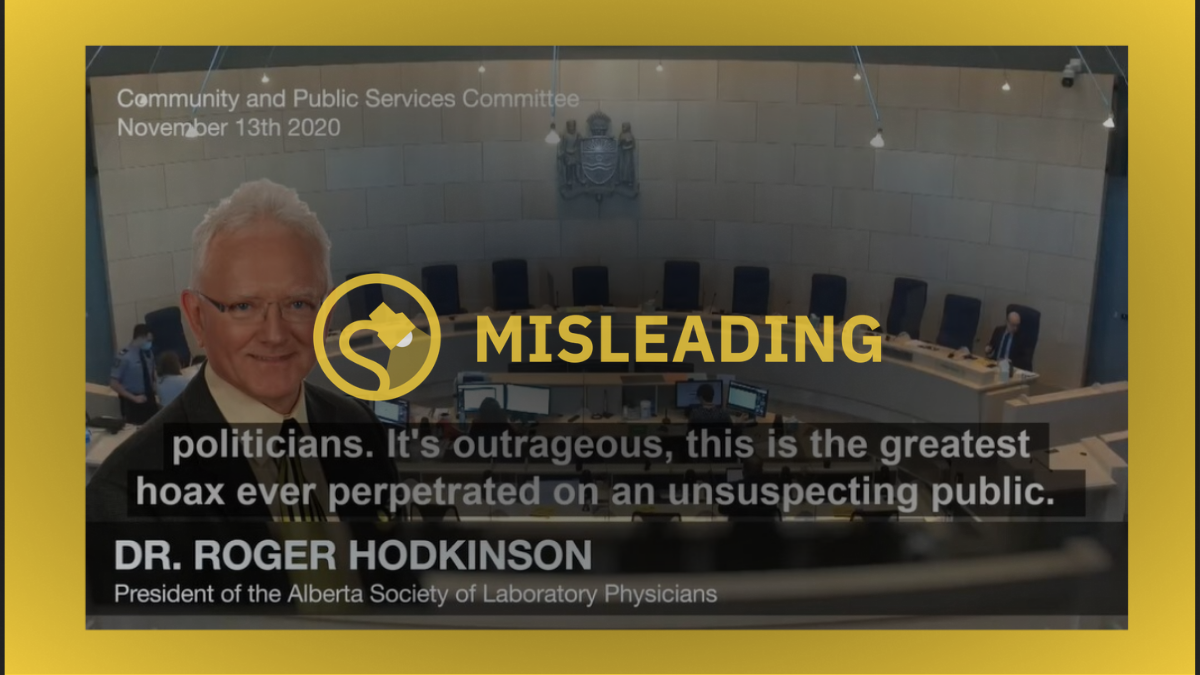 Claim:
Dr. Roger Hodkinson, the Chairman of the Royal College of Physicians and Surgeons of Canada, called COVID-19 a hoax.
Rating:

A man who identified himself as Dr. Roger Hodkinson, the CEO of a biotech company selling COVID-19 tests, said (erroneously) that COVID-19 was no worse than the flu during a public comment period of a city council meeting in Edmonton, Alberta, Canada.

Dr. Hodkinson is not the Chairman of the Royal College of Physicians and Surgeons of Canada, and his public comments do not align with the consensus of the medical community.

In November 2020, social media users began sharing a video that supposedly captured a man named Dr. Roger Hodkinson stating that COVID-19 was the "biggest hoax ever perpetrated on an unsuspected public" during a city council meeting in Edmonton, Alberta, Canada.

Although this sort of claim can typically be dismissed out of hand (COVID-19 is not a hoax, and the coronavirus pandemic has resulted in more than 1.3 million deaths worldwide), social media users claimed that this person's opinion was worth listening to since he was, according to the postings, the "Chairman of the Royal College of Physicians and Surgeons of Canada."

This caller in question was not the Chairman of the Royal College of Physicians and Surgeons of Canada (nor did he claim to be in the video), and that medical organization has released a statement distancing themselves from any association with his comments.

While some online outlets presented this viral video (seen below) as if it captured "secretly recorded audio" of a meeting between "top pathologist" Hodkinson and government officials in Canada, this audio actually originated with a city council meeting held in Edmonton on Nov. 13, 2020, which involved various members of the community calling in to voice their concerns about the COVID-19 pandemic.

Hodkinson was one such caller. Although many callers told the members of Edmonton City Council that they were unhappy with various mask mandates, the internet paid special attention to Hodkinson's comments, in large part because he detailed some seemingly praiseworthy credentials before he offered his opinions.

It should be noted that while the caller identified himself as Hodkinson and a viral video released later displayed Hodkinson's picture and his title, the original video of the call simply showed a telephone logo displayed on a black screen. In other words, Hodkinson was not an advertised speaker at this meeting, and it's possible (although not probable) that the audio featured someone claiming to be Hodkinson and not the doctor himself. We reached out to Hodkinson for confirmation and will update this article accordingly if he responds.

The person who identified as Hodkinson listed his credentials as follows:

So you don't immediately think I'm a quack, I'm going to briefly outline my credentials so that you can understand where I'm coming from in terms of knowledge base in all of this.

I'm a medical specialist in pathology which includes virology. I trained at Cambridge University in the UK. I'm the ex-president of the pathology section of the Medical Association. I was previously an assistant professor in the Faculty of Medicine doing a lot of teaching. I was the Chairman of the Royal College of Physicians of Canada examination committee in pathology in Ottawa.

But more to the point, I’m currently the Chairman of a biotechnology company in North Carolina selling a COVID-19 test, and you might say I know a little bit about all this.

As the video circulated on social media, some of Hodkinson's credentials were misconstrued. Some commenters claimed, for example, that Hodkinson was (or had been) the chairman of Canada's Royal College of Physicians and Surgeons. This was not the case. In fact, that medical organization released a statement explaining that while Hodkinson was certified as a general pathologist by the Royal College in 1976, he was never the organization's chairman:

We would like to clarify that Dr. Hodkinson is not nor has ever held the position of chairman of the Royal College of Physicians and Surgeons of Canada.

We can confirm that Dr. Roger Hodkinson was certified by the Royal College of Physicians and Surgeons of Canada as a general pathologist in 1976.

The Royal College believes COVID-19 presents a serious threat to the health of Canadians. The Royal College strongly supports all public health advice given by the Chief Public Health Officer of Canada, including recommendations to practise physical distancing and to wear masks to help prevent COVID-19 transmission. We are very appreciative of the dedication and commitment of our Royal College Fellows, residents and all front-line health care workers in the fight against COVID-19.

It was also claimed that Hodkinson was the President of the Alberta Society of Laboratory Physicians (ASLP), as shown in the caption of the viral video. The ASLP is no longer an active organization. The ASLP was a precursor to the Alberta Medical Association's Section of Laboratory Physicians — a change that occurred at least 25 years ago — and that organization has distanced itself from Hodkinson's comments. The Alberta Medical Association (AMA) released a statement saying that it “does not share any of the views of the individual in question”:

Re: public comments made recently by a pathologist that may leave an impression to the contrary, the Alberta Section of Laboratory Physicians does not share any of the views of the individual in question.

The #Alberta Section of Laboratory Physicians endorses the use of masks, hand washing and physical distancing along with all other public health measures to prevent the spread of #COVID19.

His credentials aside, the comments Hodkinson made during this city council meeting ran counter (by his own admission) to the general consensus of the scientific community. Here we'll address a few of his claims:

Among many claims Hodkinson made during the call, he said that COVID-19 should be treated as if it were "nothing more than a bad flu season." In reality, COVID-19 has proven to be far deadlier than the flu. In Canada, the flu kills approximately 3,500 people a year. COVID-19, on the other hand, has resulted in more than 11,500 deaths in Canada so far in 2020. Globally, the flu kills between 290,000 to 650,000 people every year. In the eight months since the World Health Organization declared the COVID-19 outbreak a pandemic, more than 1.3 million people have died.

The Centers for Disease Control and Prevention (CDC) explained other differences between the flu and COVID-19:

There are some key differences between flu and COVID-19. COVID-19 seems to spread more easily than flu and causes more serious illnesses in some people. It can also take longer before people show symptoms and people can be contagious for longer. Another important difference is there is a vaccine to protect against flu. There is currently no vaccine to prevent COVID-19. The best way to prevent infection is to avoid being exposed to the virus.

Masks Are 'Utterly Useless'? (No.)

Hodkinson also claimed on the call that "masks are utterly useless" and that "there is no evidence base for their effectiveness whatsoever." But this, again, is false. Multiple studies have shown mask use to slow the spread of COVID-19 and nearly every reputable health organization recommends the use of face masks (in addition to social distancing measures and regular hand-washing).

"This adds to the growing body of evidence that says large, widespread masking helps to slow the spread of COVID," says Dr. Aaron Carroll, a professor at Indiana University School of Medicine.

Carroll cautions that this was not a randomized, controlled study and there could have been other factors at play (such as more physical distancing in social situations and fewer large gatherings) in the counties that were enforcing masks.

Still, as the study notes, the findings were consistent with declines in coronavirus cases observed in 15 states and the District of Columbia where masks were mandated, compared with states that didn't require the face coverings.

To sum up: A man claiming to be Dr. Roger Hodkinson called into a public city council meeting in Edmonton, Alberta, to give his two cents about how the city was dealing with the COVID-19 pandemic. While Hodkinson, who said that he is currently the chairman of a company that produces COVID-19 tests, does have an educational background in pathology, both the Alberta Medical Association and the Royal College of Physicians and Surgeons have published statements refuting his claims. Our review of Hodkinson's comments also found that his statements contained inaccuracies as well as opinions that fall outside the consensus of the scientific community.

With that being said, here's the video of Hodkinson's public remarks during a city council meeting in Edmonton: