Are Dr. Phil and Robin McGraw Getting Divorced?

"I think it's the belief that you can't live in Hollywood and be happily married, but you can," Robin McGraw declared. 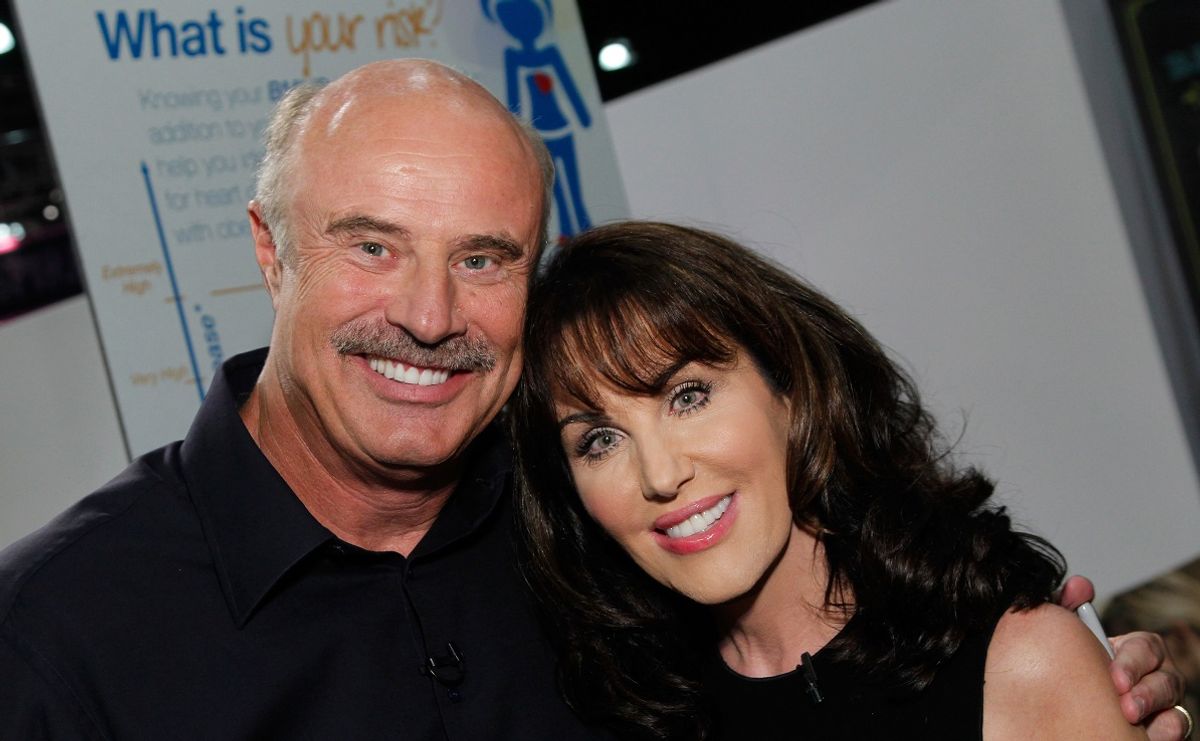 Claim:
A divorce between television psychologist Dr. Phil McGraw and his wife, Robin McGraw, is in the works.
Rating:

Even those who don't watch daytime television are generally familiar with one of its most successful and ubiquitous practitioners, psychologist Phil McGraw. Better known as “Dr. Phil,” McGraw and his wife, Robin McGraw, "counsel millions of viewers on issues ranging from marriage and domestic abuse to addiction to weight loss" on their top-rated daily program.

Dr. Phil's popularity has brought him a fair share of criticism and made him the target of numerous celebrity rumors, the latter most frequently spread by the National Enquirer and its sister tabloid, who over the last few decades have published several dozen articles accusing "Dr. Phil (and sometimes Robin) of various indiscretions, from minutia like being a 'ratings whore' to personal turmoil such as a 'secret divorce deal' to outright felonies like sexual and child abuse."

[The lawsuit] claimed the publications specifically focused on the McGraws as a means to overcome financial instability.

The lawsuit mostly focused on allegations from the tabloid that Dr. Phil abused his wife. It claims [AMI's reporting] has hurt both their professional lives, which center on providing counseling, often to couples trying to save their marriages.

But it included other examples as well. In one, the magazine “threatened” to write that a drunk Dr. Phil stood behind a man and smashed a beer mug over his head at a Lubbock, Tex., bar called the Copper Caboose while he was a student at Texas Tech University.

The issue, according to the suit, is that the Copper Caboose didn’t open until six years after he’d moved away from the city — where he didn’t return until 2014 — and didn’t serve alcohol until 2009.

The [Enquirer] said that much of [the] information it has published can be found in lawsuits filed against Dr. Phil. This is true, the lawsuit stated, but the tabloid arguably stated allegations as fact.

The McGraws dismissed their lawsuit a few months later without providing any information about its ultimate resolution, but since then the Enquirer seems to have stopped reporting negative rumors about Dr. Phil in favor of offering sensationalist, promotional articles about guests on his show.

Nonetheless, one piece of gossip-mongering that has never gone away is the claim that Dr. Phil and his wife of 43 years, the former Robin Jo Jameson, are headed for an imminent divorce — an event that, according to the Enquirer, was forestalled only due to a "secret divorce deal" over a supposed "tell-all book" authored by Robin:

Robin's "warts-and-all" memoir about their 32-year marriage could bring her a whopping $3 million advance, according to publishing insiders.

"Phil believes he's being betrayed," a friend of the 58-year-old TV shrink told The ENQUIRER. "But at the same time, he feels he's almost powerless to stop Robin!

"Their marriage has been on shaky ground for some time, and he thinks that if he demands she not write the book, she will dump him for good."

And the self-help guru has plenty of reason to worry, said another source.

"Robin reveals how Phil has humiliated her by his cheating and lying," a friend of 55-year-old Robin told The ENQUIRER.

"She's also written about their secret divorce deal -- which is already done -- and disclosed the real reason he hates his talk-show mentor Oprah Winfrey!"

Robin's manuscript also reveals that the couple has already worked out a secret divorce pact, said her friend.

"Phil knows Robin wants the success of a best-seller, but he's confident he can dissuade her by giving her a payoff equal to the potential $3 million book advance she'd reap," his friend told The ENQUIRER.

"Phil can be very convincing, and he's telling her it's what's best for their marriage. He thinks she'll take the loot -- 'crazy money' he calls it -- and forget all about turning the manuscript into a book."

The Enquirer article quoted above was originally published in April 2009, but neither a Dr. Phil divorce nor the publication of a Robin McGraw-authored "tell-all book" has transpired in the more than 10 years since then. Although Dr. Phil continues to be dogged by divorce rumors, nothing other than tabloid reporting suggests such rumors have any substance to them.

The McGraws addressed (and denied) tabloid reports of a pending divorce on their show as far back as 2008, as transcribed on the Dr. Phil website:

Robin says she's shocked that strangers would write lies about something that is so precious to her and Dr. Phil. "It really bothers me, because you know what? I'm not even mad at him, and they have me divorcing him!" she says.

Dr. Phil shows a recent photo in a tabloid which shows him carrying a bag, allegedly full of personal effects. The headline claims that Robin kicked him out, when in actuality, he was holding his tennis bag. "I'd think if I was going to move out, I'd take more stuff than this," he jokes.

Another tabloid photo showed a moving van in front of their house, loading up a large mirror. Robin and Dr. Phil explain that they were having their house remodeled while they were on vacation.

"What you have to understand about tabloids is that what they print about public figures -- and we are considered public figures -- does not have to be true," Dr. Phil says. "What they do is they go find anybody, and they pay them to be a source. These sources are always anonymous. It's always, 'A friend' said this, 'a friend' said that. They are not friends; they are cowards. They won't step up and show their face. They just do it because if your face and a scandal will sell newspapers, you're going to be on it."

"I think it's the belief that you can't live in Hollywood and be happily married, but you can," Robin says.

"One of the things that's really insulting to me is, if I was getting a divorce, it would be filed at the courthouse, and I would say so. It's nothing to be ashamed of. People get divorced every day," Dr. Phil says. "I would hate it. I would ask for your prayers and support. And if I got kicked out ..."

"Anyway, we're not getting a divorce," Dr. Phil reiterates.

In 2012, Dr. Phil again denounced divorce rumors from "stupid tabloids," this time during an appearance on the "Rachael Ray Show":

[My wife] lost both of her parents close together at a very young time in her life, and she said to me one day sitting on the end of the bed, 'You know, I'm now an orphan, I've got no people.' That's the day I told her, 'That's not true. Look me in the eye and let me tell you I will never leave you.' She believed it that day and it's something we take very seriously, which is why I just shake my head at these stupid tabloids — we are not getting a divorce, and for them to obsess on something that is so at the core definition of our family is just astounding to me.

As recently as September 2019, Robin posted a "Happy Birthday" message to Phil on Instagram, including a photograph of the two of them posing in front of the famous pop art "Love" sculpture, describing her husband as her "forever love," and proclaiming that "I love you more and more with every birthday":

?Happy birthday to my forever love @drphil!!!? I love you more and more with every birthday! ❤️❤️❤️Everyone go wish my husband a happy birthday!!! #ILoveYou #BetterWithAge

Obviously we cannot say with absolute certainty that any couple will not divorce at some point in the future. But although divorce rumors have swirled around the McGraws for 15 years or more, those rumors appear to be driven by nothing more than fabricated tabloid gossip, and the McGraws have expressed no interest or intent in divorcing, have vehemently denied such rumors multiple times, continue to work closely together, and present the outward appearance of a long-wedded couple who remain happy in their marriage: