An image purportedly showing the United States president with his wife and alleged mistress has been digitally manipulated. 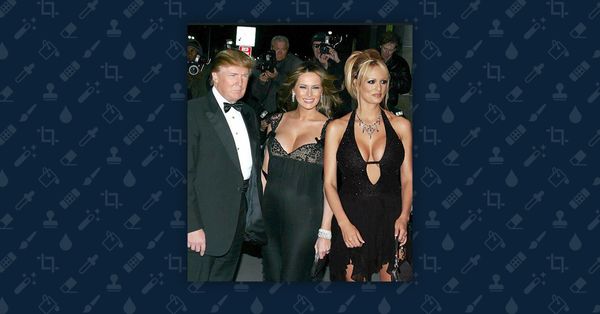 As the Stormy Daniels scandal heated up in March 2018 (the former pornography actress claims that she had an affair with Donald Trump shortly after his wife Melania gave birth), an image purportedly showing the involved parties making their way through a crowd of paparazzi started circulating online: The Evangelicals' Most Admired President

Another version of the image claimed that all there are, or at least were, good friends: This is not a genuine photograph of the Trumps with Stormy Daniels, but rather a composite of at least two different images. The image of the Trumps was taken at Fashion Group International's Night of Stars in October 2005, and it showed the future president with his wife and daughter Ivanka Trump. Stormy Daniels was not in the original photograph: Although Stormy Daniels has alleged that she had an affair with Donald Trump, this viral image showing her with Donald and Melania Trump all together was digitally manipulated.