Did Donald Trump Encourage Violence at His Rallies?

A viral cartoon accurately presented several quotations by the then-presidential candidate, delivered on the campaign trail in 2015 and 2016. 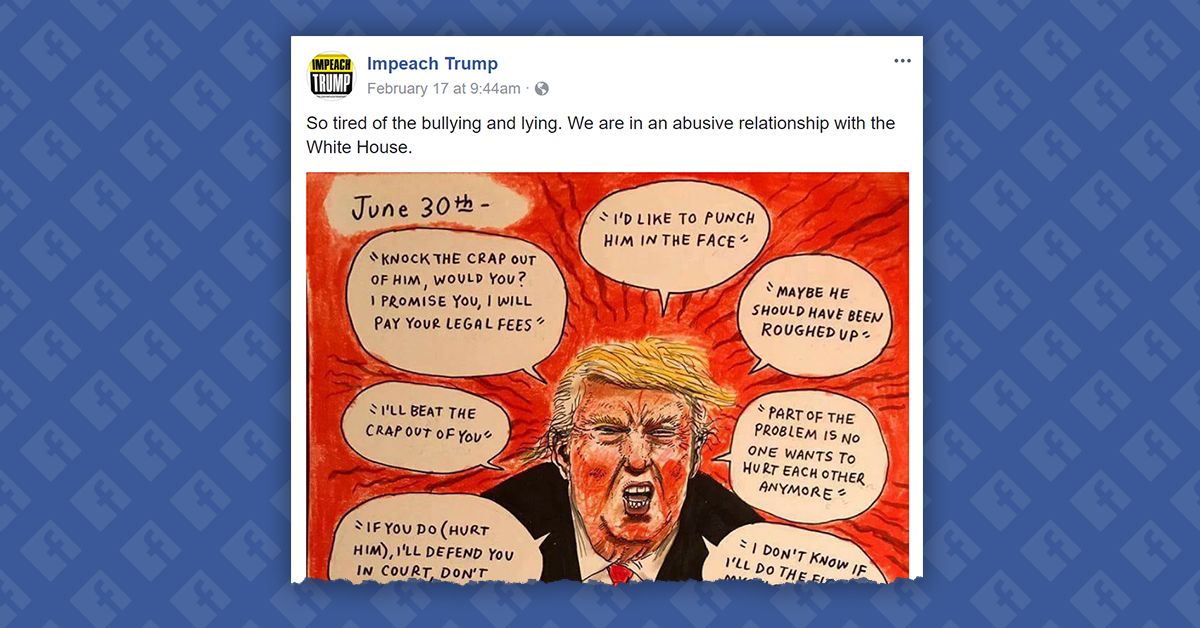 Donald Trump faced criticism during his successful 2016 presidential campaign based on the aggressive atmospheres of many of his rallies, where tension and intimidation repeatedly spilled over into violence.

Some of that violence has resulted in lawsuits. In one ongoing suit, Kentucky protesters who attempted to disrupt a rally in March 2016 are suing the president in federal court for incitement to riot after he urged "Get 'em out of here" from the stage, upon which members of the crowd attacked and forcibly removed the protesters.

As part of these criticisms, a cartoon emerged in June 2017 which appeared to accuse White House Press Secretary Sarah Huckabee Sanders of misinforming the public about Trump's record on encouraging or condoning violence.

Along with presenting eight purported statements by the president, the cartoon quotes Sanders as saying that "The President in no way, form, or fashion has ever promoted or encouraged violence": The cartoon has been shared numerous times since June and resurfaced in February 2018, when it was posted by the Impeach Trump Facebook page and tweeted out by singer/actress Bette Midler.

The cartoon was rarely credited to its creator, the illustrator Jesse Duquette, who publishes The Daily Don, a series of cartoons about the presidency of Donald Trump. Duquette first posted the cartoon to Facebook on 30 June 2017.

We've received many inquiries from readers about the authenticity of the quotations featured in the cartoon, and they are all statements made by Donald Trump. Although each is presented in isolation, they fairly reflect the context in which Trump uttered them.

Trump said this in front of a crowd of supporters, after a protester was removed from one of his rallies in Las Vegas on 23 February 2016.

"Maybe he should have been roughed up"

Trump said this on Fox and Friends on 22 November 2015, in reference to Black Lives Matter protester Mercutio Southall Jr., who was ejected from a Trump rally in Birmingham, Alabama a day earlier. Video footage appears to show Trump supporters jostling, kicking and punching Southall, prompting questions from the Fox and Friends about the 'roughing up' of the protester.

In response (at the 27-second mark), Trump defended the treatment of Southall, calling him "obnoxious" and his protest "absolutely disgusting."

The man that was -- I don't know, you say "roughed up" -- he was so obnoxious and so loud, he was screaming -- I had 10,000 people in the room yesterday, 10,000 people, and this guy started screaming by himself. And I don't know, "rough up" -- he should have been, maybe he should have been roughed up. Because it was absolutely disgusting what he was doing.

Trump said something very close to this at a tense rally in St. Louis, Missouri in March 2016. Protesters repeatedly disrupted the then-candidate's stump speech, prompting Trump to call for their removal on several occasions, in no uncertain terms, urging "Get 'em out of here."

Appearing frustrated at the speed of police and security agents in ejecting a group of demonstrators, Trump bemoaned the care taken by law enforcement to not inflict physical harm on protesters while removing them from the venue.

You know, part of the problem, and part of the reason it takes so long, is nobody wants to hurt each other anymore, right? And they're being politically correct the way they take them out, so it takes a little bit longer. And honestly, protesters, they realize it. They realize that there are no consequences to protesting anymore. There used to be consequences, there are none anymore.

Hear those comments at the 8:05 mark of this video:

Trump said this on 11 August 2015, when asked at a press conference in Birch Run, Michigan whether he would ever yield the stage to a protester at one of his events.

Two days earlier, Black Lives Matter demonstrators came on stage at a Bernie Sanders rally in Seattle, taking over the podium and interrupting the candidate's stump speech. Sanders reluctantly gave the microphone to the protesters.

At the press conference in Michigan, a reporter asked Trump "Would you give up your microphone to a protester?" The candidate responded:

I would never give up my microphone. I thought that was disgusting. That showed such weakness, the way [Sanders] was taken away by two young women -- the microphone -- they just took the whole place over...That will never happen with me. I don't know if I'll do the fighting myself or if other people will, but that was a disgrace...


"The audience hit back. That's what we need a little bit more of"

Trump said this at a press conference in Palm Beach, Florida on 11 March 2016. He was referring to the Las Vegas incident weeks earlier, after which he mused that he would like to have punched a protester in the face.

Trump again attacked the protester in question, calling him "vicious" and accusing him of instigating the violence against Trump supporters: "He was a guy who was swinging [punches] -- very loud, and then started swinging at the audience and you know what, the audience swung back, and I thought it was very, very appropriate. He was swinging, he was hitting people, and the audience hit back. And that's what we need a little bit more of."

Trump said this during another rally in March 2016, this time at Macomb County Community College in Warren, Michigan. The familiar pattern was on display — a small group of protesters outstays their welcome and are forcibly removed from the venue, and Trump encourages violence among his followers.

Addressing a particular section of the crowd, Trump says "Yeah get him out, try not to hurt him. If you do I'll defend you in court, don't worry about it."

"I'll beat the crap out of you"

At a rally in Kansas City, Missouri on 12 March 2016, Trump riffed on an incident earlier in the day in Dayton, Ohio, when a protester attempted to storm the stage he was on, before being dragged away by Secret Service agents.

On the words "boom boom boom," Trump made a punching motion. He mouthed the words "crap out of you."

While the other incidents referred to in the cartoon are examples of Trump encouraging violence against protesters, it's worth pointing out that he was talking here about defending himself in a scenario where someone had rushed toward the stage in an aggressive manner.

"Knock the crap out of him, would you? I promise you, I will pay your legal fees"

Trump said this at a rally in Cedar Rapids, Iowa in February 2016, although the quotation is truncated. A week earlier, in Iowa City, a protester threw a tomato at the candidate as he was delivering his stump speech.

When Trump came to Cedar Rapids, he referenced the tomato incident while riffing during a rally of his supporters and said, "If you see somebody getting ready to throw a tomato, knock the crap out of them, would you? Seriously, ok. Just knock the hell -- I promise you I will pay for the legal fees, I promise."


"The president in no way, form, or fashion has ever promoted or encouraged violence."

Sarah Huckabee-Sanders said this at the White House Daily Press Briefing on 29 June 2017. That morning, Trump had launched social media attacks against Mika Brzezinski, co-host of MSNBC's Morning Joe, in a series of controversial and personal tweets which some observers criticized as being "beneath the dignity" of the office of president.

In that context, CBS News Chief White House Correspondent Major Garrett put to Huckabee-Sanders a criticism of the president, namely that his vituperative tweeting "can create an atmosphere of violence." Huckabee-Sanders responded, "The president in no way, form, or fashion has ever promoted or encouraged violence. If anything, quite the contrary, and he was simply pushing back and defending himself.