Do Dogs Watch You Go to the Bathroom To Protect You?

Humans and dogs have evolved alongside one another for thousands of years. 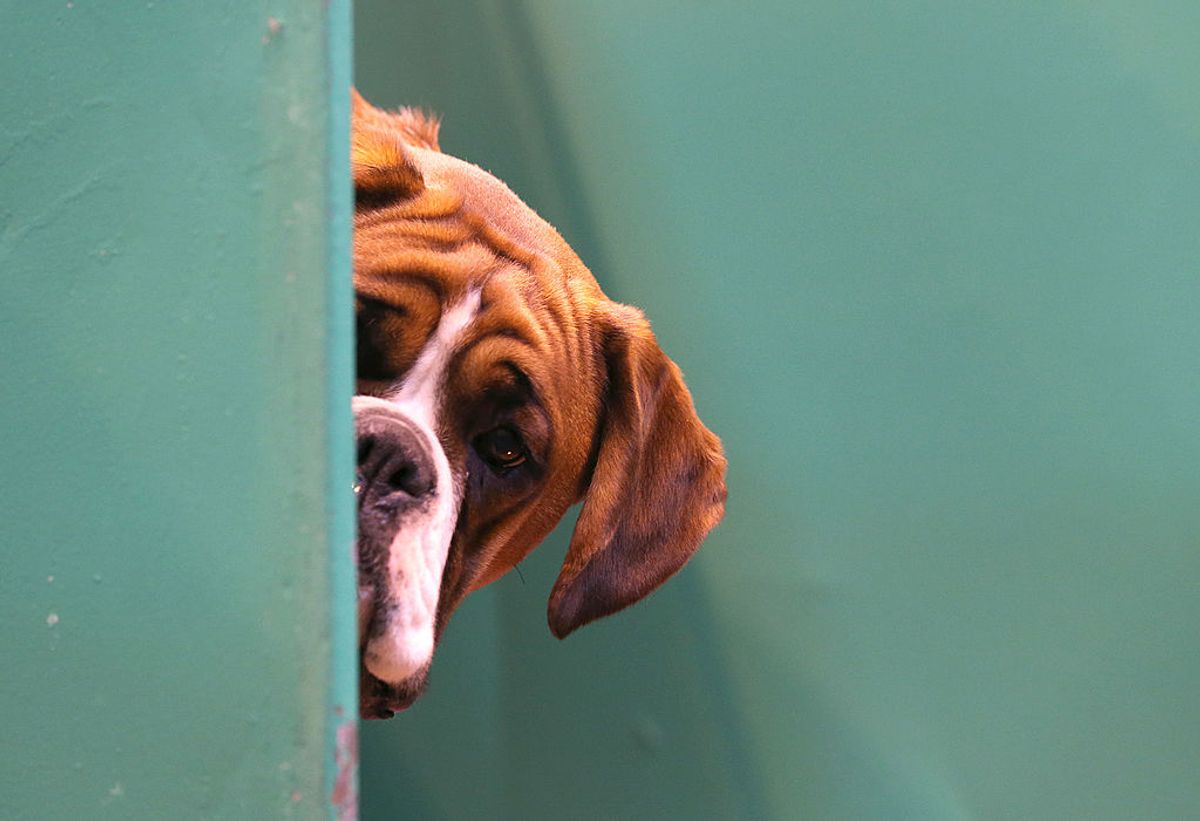 Claim:
Domestic dogs stand guard when their owners go to the bathroom, an evolutionary strategy they carry from wolves that is meant to protect pack members in vulnerable moments.
Rating:

Studies suggest that eye contact between humans and their furry companions increases concentrations of oxytocin — the so-called happy hormone — in one another and offers protection to their packmate during what is perceived to be a vulnerable moment. Furthermore, all adult members of a wild wolf pack are known to practice scent-marking behavior by urinating along territory boundaries, making urination a socially bonding practice.

Though it is believed that dogs often follow their owners into the bathroom as part of a biologically earned social trait, the exact mechanisms underlying this behavior remain poorly understood and broadly contested within the scientific community.

For dog owners who have noticed their furry friends regularly following them into the bathroom or pawing beneath the door and wondered why, social media posts offer this answer: Your dog is trying to protect you.

The claim has made the internet rounds for decades and again came to the forefront when TikTok user mavandmel posted a video in December 2020 that showed her golden retriever following her into the bathroom.

“You know when you keep trying to go to the bathroom and [the dog] keeps trying to nose their way in or they’re always standing at the door,” said the golden retriever's owner, whose video had been shared more than 48,000 times as of this writing. “Wolves and wild dogs, they protect one another while one goes to the bathroom because when you’re going to the bathroom, you’re vulnerable. So, they stand guard!”

Snopes readers asked our team to verify whether this TikTok explanation accurately accounts for the affectionate toilet behavior of our furry companions. We found that though there is some level of truth to the claim, generally speaking, this type of behavior is one learned more from nurture than nature.

For millennia, humans and dogs have grown alongside one another to form very special evolutionary bonds. In fact, research suggests that the domestication of dogs occurred at least 20,000 years ago, but likely closer to 40,000 years ago. It may come as no surprise, then, that the two species are capable of reading one another — from the dog’s ability to understand both the words and tone of human speech to being able to communicate with its owner through facial expressions.

But do dogs carefully watch their toilet-seated owners in order to protect them? That remains to be scientifically proven.

In the wild, wolves have been shown to mark their territorial boundaries using the scent of their urine — a trait that pet dogs have brought with them into their neighborhood environments. This same behavior suggests that both wild and domesticated canines use olfactory cues to communicate with other members of their species. And when it comes to protection, canines are known to defend members of their pack from predators and perceived threats, contributing to the strong societal and familial bonds that both wolves and pet dogs share with their families. Members of the Yellowstone Druid wolf pack chase down an elk. NPS/Doug Smith

That loving connection extends to the human-canine relationship as well. Research published in the journal Science found that shared eye contact between humans and their furry companions increases concentrations of oxytocin — the so-called happy hormone — in much the same way humans may bond emotionally when they gaze into another person’s eyes.

“Human-like modes of communication, including mutual gaze, in dogs, may have been acquired during domestication with humans,” wrote the study authors at the time, adding that wolves rarely engage in eye contact with their human handlers. “We show that gazing behavior from dogs, but not wolves, increased urinary oxytocin concentrations in owners, which consequently facilitated owners’ affiliation and increased oxytocin concentration in dogs.”

While the scientific literature has shown strong evidence for communication and bonding through the act of urinating and other bonding behavior in both canine and human-canine relationships, it does not prove that dogs go into the bathroom with their owner to protect them. Rather, it more than likely simply reflects a desire to be closer to their humans.

Snopes spoke with Paul Mundell, executive director of the American Service Dog Access Coalition, who said that although he has not systematically studied the question, he is skeptical of the claim that dogs who look intently at their owners while defecating are seeking assurance that either the owner will protect the dog or vice versa.

“Conversely, if the pup was rewarded for defecating in the right areas, it may have set up the expectation that defecating may be followed by a reward — even if the owner hasn’t maintained the practice.”

Mundell remained equally as skeptical when it came to describing the behavior of a pup following a person into the bathroom for “protection,” particularly as the bathroom is not likely to be considered an unsafe space. During thunderstorms or fireworks, for example, dogs will often turn to the confined, isolated space of a bathroom or bathtub for security.

“For some dogs, following a person into the bathroom is the same behavior they display whenever their person goes anywhere — they follow them in order to remain near them. This is most pronounced in dogs displaying hyper-attachment to their owners,” said Mundell, comparing the bond to that of children with their parents. Going to the bathroom provides an opportunity for our furry friends to interact with their uninterrupted owners, who may otherwise be occupied with chores, the computer, or other things that distract from petting and attention.

Finally, dogs live in an olfactory world, and Mundell says that the urine and feces humans produce contain uniquely personal mixtures of volatile organic compounds due to each person’s individual metabolisms, diets, and microbiomes — all of which may be interesting and even rewarding information to the dog.