Does Luxottica Own 80% of the Eyeglass Industry?

It's true that Luxottica controls a large chunk of the eyewear industry, but possibly not nearly as much as 80 percent. 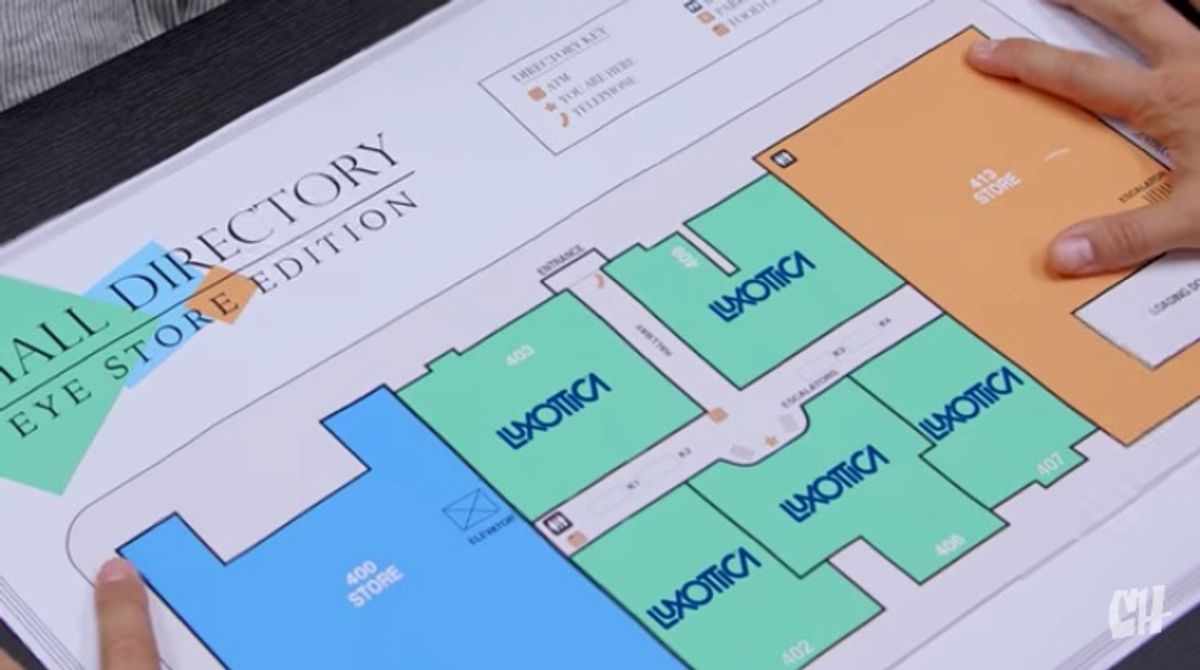 Whether Luxottica controls 80 percent of the entire eyeglass and sunglass market.

On 14 September 2016, the College Humor web site published a segment of popular truTV debunking show Adam Ruins Everything about "The Conspiracy Behind Your Glasses," describing how the Luxottica conglomerate owns 80 percent of eyeglass brands, most optometry chains, and the second-largest vision care insurer in the United States:

Unlike most videos of this nature, Adam Ruins Everything provides links to sources for their statements. The video's primary claim was that Luxottica controls 80 percent of the eyeglass market, which was supported by reference to a 2014 Forbes blog post. That blog post cited a 2012 Forbes, which in turn offered up the statistic without citation:

Products exist in the mind and brands live in the heart: Luxury brands conjure up lifestyle interpretations we want to buy into. More than 500 million people don Luxottica’s products and CEO Andrea Guerra insists that “customers have the brand choice for their lifestyle,” and that it’s prevalent in their offering: “Luxottica has been able to deliver eyewear collections faster, enriched with more sophisticated decorations and innovative materials, to stores.” If you owned 80% of the high-end eyewear market and were doing what any CMO desires — achieving brand growth, relevance and revenue — you’d say that too, right?

Without additional documentation it was difficult to authenticate the claim that Luxottica controls "80 percent of glasses and sunglasses brands," as both cited Forbes pieces were published by contributors and not the magazine itself.

Variables such as the passage of time (four years between the claim's first uncited appearance in Forbes and its reiteration in the September 2016 video), ongoing increases in e-commerce, and the difficulty of establishing a baseline against which to compare Luxottica's market share versus those pf innumerable small competitors made verification problematic.

Much of the interest in Luxottica's retail dominance came from a segment aired on the CBS 60 Minutes news magazine program in 2012, but that segment also did not provide a number for the proportion of eyeglass and sunglass brands that fall under Luxottica's umbrella (compared to those of competitors such as Walmart, Costco, Zenni Optical, or Warby Parker).

In May 2015, Business of Fashion provided more recent figures for Luxottica's European sales performance, contrasted with those of the next-largest competitor, the Safilo group:

Luxottica, the dominant frame producer, owns a portfolio of eyewear brands that includes Persol and Ray-Ban, the latter of which is the biggest brand in the market. It holds the licenses to produce eyewear for global fashion brands such as Chanel, Armani, Prada and Michael Kors and manages the distribution of its products through 200,000 wholesale doors. In 2014, the Italian company generated over €7.6 billion (about $8.5 billion) in revenue. In addition, Luxottica owns the Sunglass Hut retail brand and is a retail company in its own right, with over 7,000 stores worldwide, giving it a majority share of the eyewear market.

Rumblings of discontent about Luxottica's increasingly firm grip on the eyewear market were not new in 2016. A 2013 Yahoo! Finance article examined whether the brand's stranglehold on optometry chains inhibited patients from obtaining complete prescriptions and taking their business elsewhere:

When California attorney Sylvia Chi wanted a new pair of glasses, she came across Warby Parker, an upstart online seller that features hip styles and low prices. She had her prescription but Warby Parker needed one more piece of information to make her glasses — the distance between her pupils.

Chi called a Pearle Vision store where she’d bought her last pair but the store refused to give out the measurement. A local LensCrafters told her its pupil measuring machine was broken. Ultimately, Chi had to pay $25 at a local optometry clinic to get her pupillary distance, or PD.

Turns out the giant of the $28 billion U.S. eyewear market, Luxottica (LUX), owns both store chains. And the Italian company, which also owns everything from brands like Oliver Peoples and Ray-Ban to the Sunglasses Hut chain, has cracked down on giving out the PD measurement.

Optometrists “used to do it for free in optical shops and now they’re refusing to provide that service or charging for it,” says Warby Parker co-founder and co-CEO David Gilboa. “A lot of them work in stores owned by Luxottica.”

“The reason Luxottica invested in all the physical retailers was precisely to create a closed system,” says Barry Lynn, a senior fellow at the New America Foundation.

The company did not respond to repeated requests for comment.

Lynn brought interest into Luxottica's market dominance to the fore in his 2011 book Cornered: The New Monopoly Capitalism and the Economics of Destruction:

You're at the mall, looking to buy a pair of prescription sunglasses. Which of the four eyeglass stores listed in the directory should you visit first? Don't waste a lot of time deciding; it really doesn't matter. A single, huge international corporation owns three of the four eyeglass stores listed. And the fourth? Out of business. Think you'll try your luck at Sears? Don't bother. The same company you've never heard of controls their eyewear department, too. What appears at first to be a fine example of competitive capitalism in action is, in fact, an immense monopoly in disguise.

In May 2011, Luxottica made headlines in California for controversial business practices criticized as a bid to expand control of the eyewear market:

Barry Lynn, director of the New America Foundation’s Markets, Enterprise and Resiliency Initiative, said if you define a monopolistic company as one “big enough to determine the terms of business within its industry,” then Luxottica qualifies. “The consumer is not protected when you have this kind of consolidation.”

A 2008 article in advocacy periodical Consumers Digest maintained a critical view of Luxottica, describing several mergers and buyouts and a less-than-flattering assessment of the Luxottica's practices:

The federal government barely blinked when Luxottica Group, the world’s largest frame manufacturer, extended its reach and influence beyond design. It now controls 20 percent of the retail market in the United States, including ownership of national chain stores, such as LensCrafters and Pearle Vision. On top of it all, you’re paying way too much. From the local doctor’s office to the well-known retail chain, these places mark up the price of your frames and lenses by about 250 percent.

Over the past 5 years, Luxottica, the world’s largest corporate player in the eyeglasses industry, steadily bought up other companies. Today, the company owns 30 different brands of frames, including Anne Klein, Burberry, DKNY, Oakley, Polo, Ralph Lauren, Ray-Ban, Versace and Vogue. It also controls retail shops, including LensCrafters, Pearle Vision, Sears Optical and Target Optical. And it owns the EyeMed Vision Care group, a vision insurance company. It makes its frames in company-owned plants in China and Italy and sells them in about 130 countries, so it’s no surprise that Luxottica also owns China’s Modern Sight Optics, a leading Chinese optical retailer.

To us, that’s quite a vertical integration that could present problems for consumers. To FTC, it appears to be business as usual. FTC investigated Luxottica’s acquisitions in 2004, after the company acquired Pearle Vision, says Michael Moiseyev, assistant director, mergers, in the Bureau of Competition. But the agency decided Luxottica’s takeovers did not constitute a monopoly, Moiseyev says, because “it only accounts for 20 percent of the market, so it’s not the kind of volume that gives us cause for concern.”

In 2015, New York State Senator Chuck Schumer proposed changes to the FTC's Eyeglass Rule of 1992, enacted to ensure that patients were not locked into purchasing overpriced glasses because of monopolies. In a 27 September 2015 press release, Schumer's office cited the "80 percent" figure for Luxoticca's market share:

Standing at LensCrafters, U.S. Senator Charles E. Schumer today urged the Federal Trade Commission (FTC) to modernize its “Eyeglass Rule” to allow for 21st-century competition by allowing patients to obtain a full copy of their eyeglass prescriptions so they can take that prescription anywhere they want—even online. Under current law, patients are not entitled to their full prescription, a situation that often forces them to pay more when buying glasses. Schumer explained that, while more than 200 million Americans are affected by vision loss, the average price for a pair of eyeglasses is a whopping $300 with no end in sight.

Luxoticca, an Italian company, which owns LensCrafters and more than 80 percent of eyewear brands. For instance, Luxoticca makes frames for well-known brands like Burberry, Prada, and Tory Burch. In addition, Luxoticca owns several other popular American eyeglass chains such as Pearle Vision, Sears Optical and Target Optical. Schumer explained that Luxoticca has a monopoly-like hold over the eyewear industry and that this push, along with other actions, could help weaken this hold. Additionally, many health plans do not adequately cover eye care, while forces patients to pay out of pocket.

"I feel Senator Schumer maybe a little misinformed here,” says Optometry Times Chief Optometric Editor Ernie Bowling, OD, FAAO. “There are lots of online retailers available to the public. I really don't see competition or consumer choice in eyewear to be an issue right now ... When discussing the information needed to fill a prescription, we are really talking about the spectacle PD. I give the PD to every patient as part of his written prescription,” says Dr. Bowling. “I don't think it's worth alienating a patient over a PD. But we do educate the patient about their choices in eyewear. There is a huge service component that goes in to measuring and fitting spectacles that you're not getting with an online retailer.”

We were surprised to see how Senator Schumer presented our business and our industry in his public statement regarding the FTC’s
eyeglass rule. The optical industry is highly competitive and fragmented today. Industry data has consistently shown that Luxottica’s share of eyeglass frame sales in the U.S. is below 20 percent. Moreover, the top 50 optical retailers combined account for only about a third of all U.S. eyeglasses sales.

Luxottica themselves sent us the following statement:

According to VisionWatch, almost 50% of eyeglasses in the U.S. are sold by independent optometrists and opticians. The other half is made up of chain retailers that include Costco, Walmart, Solstice and other non-Luxottica entities.

According to Euromonitor International, the world’s leading independent provider of strategic market research, 954 million frames were sold worldwide last year. Only 93 million of those were produced by Luxottica — less than 10%.

Of the hundreds of eyewear brands available to consumers, Luxottica only produces around 30 of them. This includes Luxottica’s proprietary brands such as Ray-Ban and Oakley as well as licensed brands such as Giorgio Armani, Burberry, Chanel, Dolce&Gabbana, Michael Kors and Prada, which make up the majority of the portfolio.

Regardless of the actual figure, much of Adam Ruins Everything's assessment of Luxottica's market dominance was accurate, including the conglomerate's ownership of several prominent optometry chains and the second-largest vision care insurer in the United States.

However, it is difficult to measure Luxottica's relative dominance against the innumerable independent optometry practices, large-scale retailers such as Walmart and Costco, and popular online retailers such Zenni Optical and Warby Parker.  It is true that avoiding Luxottica's products can be difficult in mass retail environments, but patients with a complete eyeglass prescription are still able to obtain eyeglasses and sunglasses through other companies.

Swanson, Ana.   "Meet the Four-Eyed, Eight-Tentacled Monopoly That Is Making Your Glasses So Expensive."     Forbes.   10 September 2014.