Did the Daily Mail Delete a Story Reporting the U.S. Planned to Blame Assad for 'False Flag' Chemical Attacks?

The British tabloid did delete the 2013 story, but only because they were forced to admit it was not true. 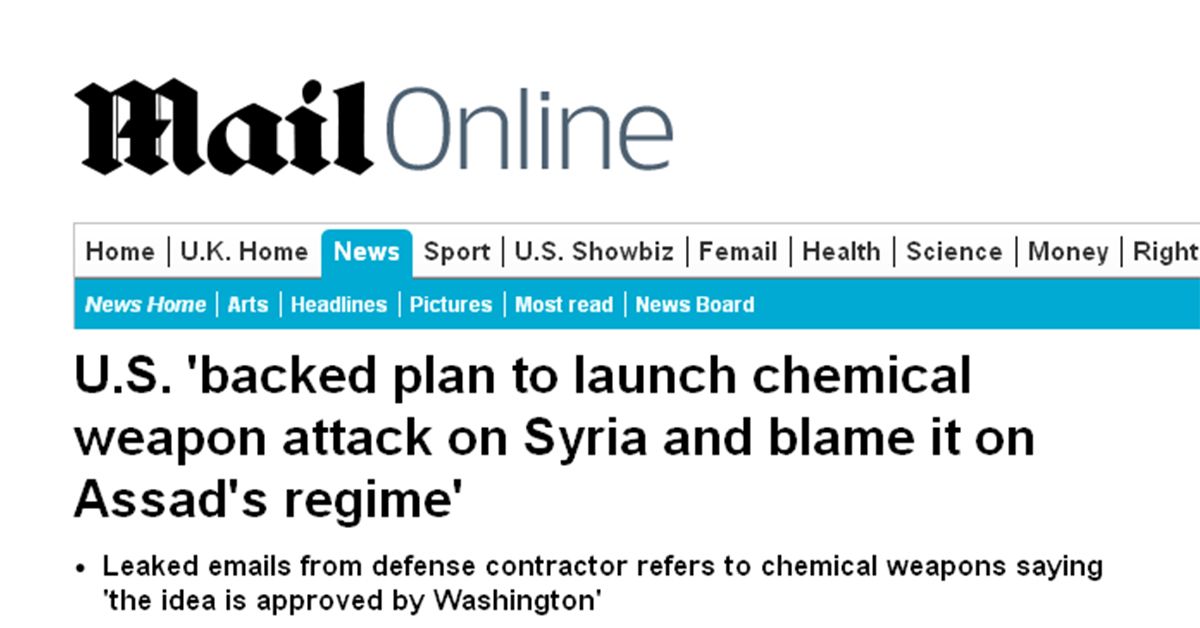 Claim:
The Daily Mail posted, and then deleted, a story saying the U.S. had given the "green light" for a chemical weapons attack in Syria that could be blamed on Assad.
Rating:

The Daily Mail did post and then delete a story claiming U.S. officials had given the "green light" to a chemical weapon attack in Syria and frame Assad.

The article was deleted because the Daily Mail admitted it was false; they were subsequently forced to pay libel damages to the British company it named.

On 7 April 2017, conspiracy web site Truth Theory revived a now-deleted 2013 story by the British tabloid the Daily Mail (headlined, "U.S. ‘backed plan to launch chemical weapon attack on Syria and blame it on Assad’s regime'"). The article's republishing coincided with an American missile strike retaliating against a chemical attack by the Syrian government on civilians in rebel-held Khan Sheikhoun three days earlier.

The Daily Mail article reported having evidence of an impending "false flag" attack. (A so-called "false flag" is a common conspiracy theory that asserts governments initiate crises — real or fabricated — to lay the groundwork for unpopular actions such as confiscating guns, or, in this case, removing a president from power.) Conspiracy web sites claimed the reason for the article's deletion was "unclear," implying that forces intent on hiding a nefarious plot to oust Syrian president Bashar al-Assad pressured the publication to do so.

The Daily Mail article, originally published 29 January 2013, reported that U.S. officials had told a British defense company they had been given a “green light” for chemical weapons use in Syria that could then be blamed on Assad:

Leaked emails have allegedly proved that the White House gave the green light to a chemical weapons attack in Syria that could be blamed on Assad's regime and in turn, spur international military action in the devastated country.

A report released on Monday contains an email exchange between two senior officials at British-based contractor Britam Defence where a scheme 'approved by Washington' is outlined explaining that Qatar would fund rebel forces in Syria to use chemical weapons.

Barack Obama made it clear to Syrian president Bashar al-Assad last month that the U.S. would not tolerate Syria using chemical weapons against its own people.

The idea that the chemical attacks in Syria had been disguised to look like Assad's work, thus giving his adversaries cover to remove him from power, is a pervasive conspiracy theory that has been disseminated by the Assad-allied Russian government. On 11 April 2017, RT, a Kremlin-funded media outlet, quoted President Vladimir Putin airing that same claim:

Russia has information of a potential incident similar to the alleged chemical attack in Idlib province, possibly targeting a Damascus suburb, President Vladimir Putin said. The goal is to discredit the government of Syrian President Assad, he added.

“We have reports from multiple sources that false flags like this one – and I cannot call it otherwise – are being prepared in other parts of Syria, including the southern suburbs of Damascus. They plan to plant some chemical there and accuse the Syrian government of an attack,” he said at a joint press conference with Italian President Sergio Mattarella in Moscow.

Damascus denied the allegations, noting that the targeted area may have been hosting chemical weapons stockpiles belonging to Islamic State (IS, formerly ISIS/ISIL) or Al-Nusra Front jihadists.

But Truth Theory and other sites that re-posted the old Daily Mail story failed to note that the article wasn't deleted due to pressure from an evil globalist cabal, but instead was taken down because the publication admitted it was untrue. The Daily Mail apologized to officials of Britam Defence and paid damages for libel after admitting the "leaked e-mails" were actually forged by a hacker.

One of the fake e-mails read:

We’ve got a new offer. It’s about Syria again. Qataris propose an attractive deal and swear that the idea is approved by Washington.

We’ll have to deliver a CW to Homs, a Soviet origin g-shell from Libya similar to those that Assad should have. They want us to deploy our Ukrainian personnel that should speak Russian and make a video record.

Frankly, I don’t think it’s a good idea but the sums proposed are enormous. Your opinion?

Carter-Ruck, the law firm that represented the defense company, wrote in its Autumn 2013 newsletter of the case:

The Mail’s allegations were based on emails said to have been sent between two Britam directors, which had been published on the internet after Britam’s computer systems had been illegally hacked. In fact, however,the emails were forgeries. They had been fabricated and published online by the hacker, whose activities remain the subject of a number of criminal investigations.

Faced with these facts, the Mail accepted that the allegations it had published were completely false. In addition to publishing a prominent apology on its website and in the High Court, the Mail paid the company and the two directors £110,000 in libel damages, together with their legal costs

An article on 29 January reported allegations on the internet that the US Government had backed a plot to launch a chemicals weapons attack in Syria and blame it on the Assad regime.

The reports made reference to an email said to have been from David Goulding, the Business Development Director of Britam Defence, to company founder, Philip Doughty. The email had been published on the internet after Britam’s computer system was illegally hacked in Singapore. It referred to a proposal that Britam would deliver chemical weapons to Syria for enormous financial reward and suggested that the directors were willing to consider the illegal proposal.

We now accept that email was fabricated and acknowledge there is no truth in any suggestion that Britam or its directors were willing to consider taking part in such a plot, which may have led to an atrocity.

We apologise to each of them and have agreed to pay substantial damages.