Did Taylor Swift Say 'We Should FORGIVE' YouTube's Logan Paul?

A Twitter account posing as the E! cable network fabricated "forgiveness" statements by both Swift and Mariah Carey. 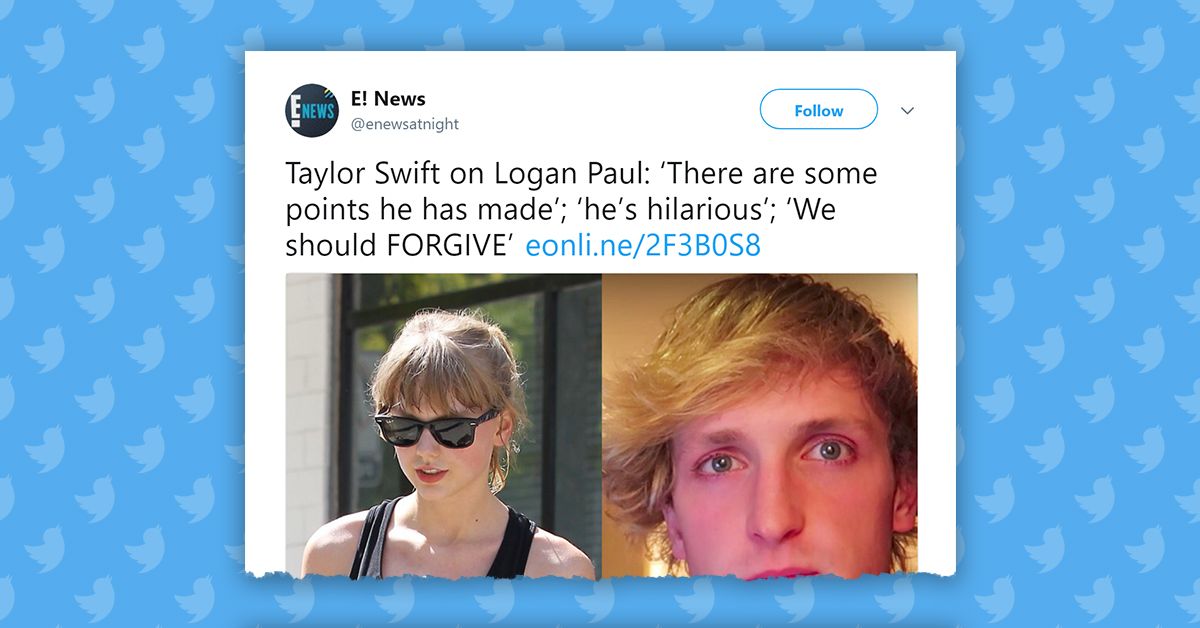 Amid an outpouring of criticism against YouTube personality Logan Paul—who broadcast video of a man who had committed suicide—a fake news Twitter account leapt to his defense with made-up statements of support purporting to be made by pop music star Taylor Swift.

On 5 January 2018 the user @enewsatnight—which falsely presents itself as E! News, the news compoment of the E! entertainment network—posted:

Taylor Swift on Logan Paul: ‘There are some points he has made’; ‘he’s hilarious’; ‘We should FORGIVE’ Swift's social media accounts have never mentioned Paul, though he tried (unsuccessfully) to generate interest in December 2017 for a request that they work together.

While the quotes were fabricated, the link attached to the tweet goes to an actual E! story about Paul's puerile excursion to Japan, during which he not only filmed the body of someone who took his own life but attempted to "catch" bystanders in the manner of a Pokemon game and throwing raw fish at others.

Though that tweet had been shared around 700 times as of 8 January 2018, a separate user's post spreading it with the dismissive caption, "Bitch we hate you too lmaoo" received more than 68,000 retweets, thus giving it even more exposure: The footage of Paul's Tokyo visit has brought about criticism against not only him but YouTube itself for continuing to allow Paul to make money off of his off-kilter and often ill-mannered content. Paul has taken a hiatus from broadcasting after releasing written and video apologies for his actions.

E! News (which is actually @enews on Twitter) did not comment on the fabricated story. We also contacted police in the Yamanashi Prefecture of Japan concerning reports that they are seeking to question Paul.

The fake E! account also posted a tweet made up of fake statements attributed to another singer, Mariah Carey:

Mariah Carey on Woody Allen: 'He's made mistakes, sure... But so have we all, it's time for forgiveness.' However, that tweet also redirects readers to the network's 5 January 2018 story about Paul.

Matsakis, Louise. "The Logan Paul Video Should be a Reckoning for YouTube." Wired. 3 January 2018.