Did a Sick Child's Classmates Refuse to Wish Him a Happy Birthday?

A photograph of young child with a rare disease was exploited for likes and retweets on social media. 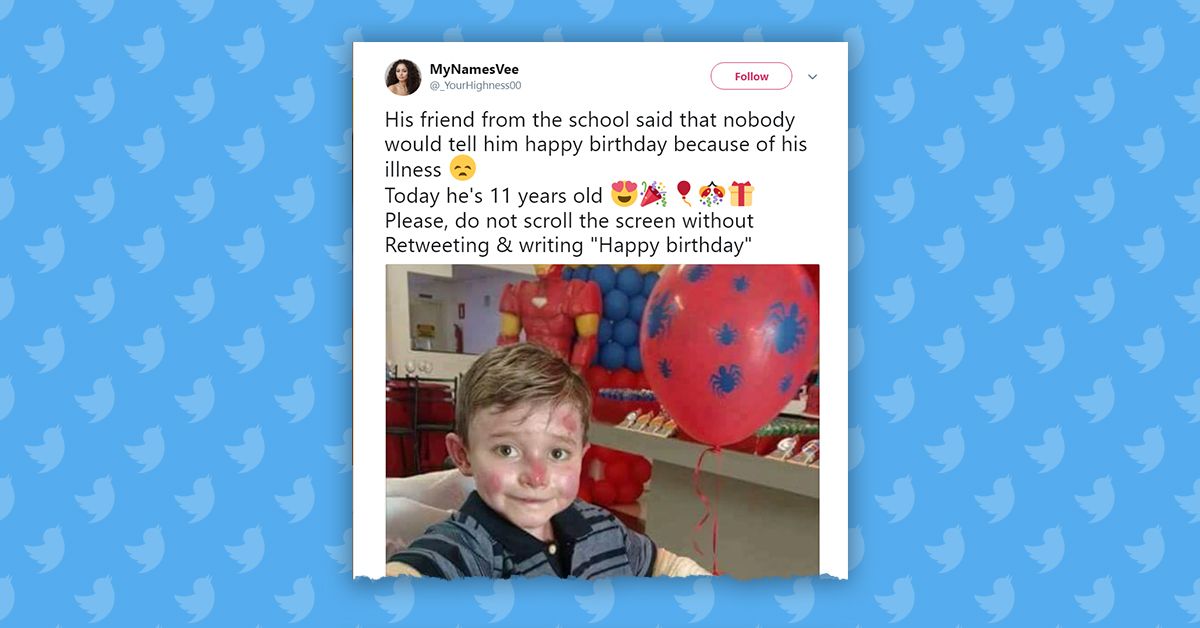 Claim:
A photograph shows a young boy with a rare disease after his classmates refused to wish him a happy birthday.
Rating:

In March 2018, a photograph showing a young boy and describing a depressing backstory about how his classmates refused to wish him a happy birthday because of his illness appeared on social media, quickly getting shared by thousands, as such things tend to do: His friend from the school said that nobody would tell him happy birthday because of his illness ?
Today he's 11 years old ?????
Please, do not scroll the screen without Retweeting & writing "Happy birthday"

This is a genuine photograph of a child with a rare disease. The emotionally manipulative backstory, however, was made up out of the whole cloth in order to generate retweets and likes. (This is a common tactic employed by "like-farming" scams. You can read more about these fraudulent schemes here.)

The child in this image is Luca Costa, a young Brazilian boy who was diagnosed with epidermolysis bullosa, a rare disease that causes the skin to blister.

This particular image was posted to Costa's Instagram page in December 2016 and shows the young boy at a party for his ninth birthday, not his 11th. It was shared with a message thanking his friends and family:

Good morning people! Last Sunday 04/12, I celebrated my 9th birthday and got a sensational party with my friends! My little heart was jumping in my chest with the happiness that I felt. Life is the greatest gift I could receive from God in Heaven and being able to celebrate the arrival of yet another birthday is simply amazing!
Jesus bless.
Kiss Lukinhas! ?

The backstory included in this viral social media posts also doesn't fit with what we can glean from Costa's social media profiles. One post, for instance, states that Costa doesn't go to a typical school in Brazil. Another post shows Costa celebrating a birthday with a group of friends: This like-farming scam urged people to retweet and "like" the post. However, these actions don't do anything to actually help Costa and his family. If you would like to learn more about Luca and his life with epidermolysis bullosa, including how to help out his family, you can visit his web site.