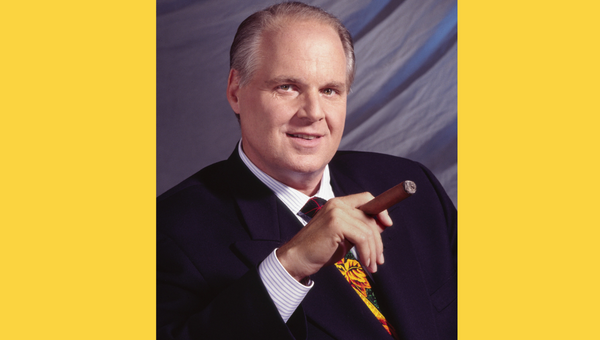 Conservative commentator and radio host Rush Limbaugh died at the age of 70 on Feb. 17, 2021, after a battle with lung cancer. Limbaugh was well-known to be an avid smoker of cigars. In fact, in many photographs, Limbaugh is posing with a cigar.

Limbaugh was a cigarette smoker, but stated that he quit smoking cigarettes in the 1980s.

Limbaugh's passing came one year after he revealed his diagnosis. In February 2020, the announcement drew attention to comments Limbaugh had made in 2015 on his show, denying known health risks associated with smoking. During the April 2015 segment, Limbaugh responded to a caller who stated that people are at risk of disease from second-hand smoke exposure.

No. You can’t. That is a myth. That has been disproven at the World Health Organization and the report was suppressed. There is no fatality whatsoever. There’s no even major sickness component associated with secondhand smoke. It may irritate you, and you may not like it, but it will not make you sick, and it will not kill you.

But the World Health Organization stated the opposite of what Limbaugh claimed:

Without a doubt, secondhand smoke is a human lung carcinogen, responsible for 3,000 lung cancer deaths each year in the United States alone. Given the capacity for mutation of carcinogenic substances even in a very small dose, it is impossible to establish any safe threshold for a dose of tobacco smoke exposure. In other words, there is no level at which exposure is not harmful.

Unlike cigarette smokers, cigar smokers typically don't inhale smoke. However, per the Mayo Clinic, that doesn't mean cigar smokers are at a reduced cancer risk. The National Cancer Institute states that cigar smoking "causes cancer of the oral cavity, larynx, esophagus, and lung."

Around the time of his diagnosis, Limbaugh was also under fire for his past remarks on the addictiveness of nicotine.