Did a Man Receive a $153,000 Hospital Bill After a Failed Selfie With a Rattlesnake?

Venomous rattlesnake bites can be notoriously expensive to treat, thanks mainly to high drug costs and arcane insurance-hospital negotiations. 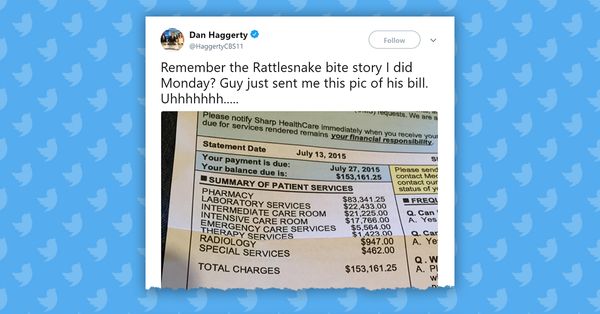 Claim:
A man received a $153,000 hospital bill after a bite he sustained from a rattlesnake that he was attempting to take a selfie with.
Rating:

On 4 June 2015, a man named Todd Fassler attempted to take a selfie with a rattlesnake during a trip to the Barona Speedway racetrack. As San Diego's 10News.com first reported, it did not go well:

10News was the first to bring you the story of Todd Fassler, who was bitten by a rattlesnake at the Barona Speedway on July 4. "He paralyzed my body … My tongue was sticking out, my eyes were to the side," Fassler told 10News. Fassler was bitten as he was trying to get a selfie with the snake.

The story gained a much wider audience after the reporter who broke that story tweeted a copy of the hospital bill Fassler received following treatment of the near-fatal wound. That image continues to be featured in memes and other social media posts years later. Fassler's stay, which lasted from 4 July 2015 to 9 July 2015, resulted in a bill for $153,000:

The story is factual, and in the words of the Washington Post’s WonkBlog, it represents "everything wrong with American health care." The most significant cost, at $83,341.25, was for pharmaceuticals. Here, the culprit was a lack of competition in the pharmaceutical industry (aided in part by patent lawsuits) and the resulting ability for a single company to drive the antivenom (also referred to as antivenin) market:

There's currently [at the time of writing in 2015] only one commercially available antivenin for treating venomous snakebites in the United States — CroFab, manufactured by U.K.-based BTG plc. And with a stable market of 7,000 to 8,000 snakebite victims per year and no competitors, business is pretty good. BTG's latest annual report shows CroFab sales topped out at close to 63 million British pounds, or $98 million dollars, last fiscal year. [...] BTG has fought aggressively to keep competitors off the market. [...] This lack of competition is one reason that snakebite treatments rack up such huge hospital bills.

As a result of the complex process of negotiation between insurance companies, hospitals, and drug manufacturers, the cost of an individual dose of CroFab is not easily represented as a simple dollar figure. As reported by CBS News, the wholesale cost of the drug — then around $2,500 — does not represent what ends up being billed to the patient:

The wholesale rate that hospitals pay to the manufacturer is $2,500 per vial and the markup to patients and insurance is much higher.

Fassler, it bears mentioning, “depleted the anti-venom stash at two different hospitals,” according to 10News. Due to the rarity of use, the amount of antivenom a hospital has on hand at any time is variable, as is the amount any given patient might need. Other notable rattlesnake bite cases have resulted in similarly astronomical costs. A Maryland woman received a $55,000 bill after a copperhead snake bite in 2013. A North Carolina man was hit was an $89,000 bill for a snake bite that same year. In 2012, a UC San Diego exchange student was given a $144,000 hospital bill after a rattlesnake bite.

Beginning in October 2018, a new antivenom drug will be available to the general public, which will introduce competition into the snake bite pharmaceutical industry — although it is unclear what effect this will have on the overall cost of this kind of emergency treatment.

The second most significant cost Fassler faced was $22,433.00 in laboratory services. A litany of bloodwork and other tests is indicated for cases of snakebites; these costs are also sometimes high, variable and ultimately negotiable between hospital and insurance company.

The third most significant costs were for Fassler’s "Intermediate Care Room" and "Intensive Care Room" stays. According to a 2005 study that attempted (among other things) to quantify average costs of stays in ICUs, the costs of intensive care stays is high right from the moment a patient enters, and higher for people who require mechanical ventilation — something someone who was paralyzed by a venomous bite likely would require for at least some time. The costs estimated in this study are broadly in line with the costs presented in the Fassler’s bill:

Other services are harder to pin down specifically, but a $947.00 charge for radiology is not out of the question, as X-rays are sometimes used to confirm that no bits of snake teeth remain in a patient’s system.

All these costs are real, but they are not necessarily a reflection of what the hospital is expecting to be paid. According to the Washington Post:

The other reason hospitals charge so much [outside of the problems caused by pharmaceutical monopolies] is the byzantine negotiating process that happens between hospitals and insurance companies to determine the final payout amount. In the case of the $143,000 snakebite in 2012, for instance, Scripps Hospital in San Diego explained that "it is important to understand that these charges are not reflective of what Scripps will be paid. [...]

In many cases, a hospital bill isn't actually a bill, but essentially an instrument in a complex negotiation between insurers and caregivers, with bewildered patients stuck in the middle. It's difficult to know which charges are real and which ones aren't, and which bills to pay and which ones to ignore. It's one reason medical debt is a huge factor in so many bankruptcies.

We were unable to contact Fassler, but we have reached out to Dan Haggerty (the reporter who first reported the incident for 10News) to see if he was aware of any updates to Fassler’s case, and what the final outcome may have been.