Did Kawhi Leonard Refuse to Play Because His Coach Made Anti-Trump Comments?

A quote attributed to the San Antonio Spurs small forward about Gregg Popovich's criticism of the president is fake. 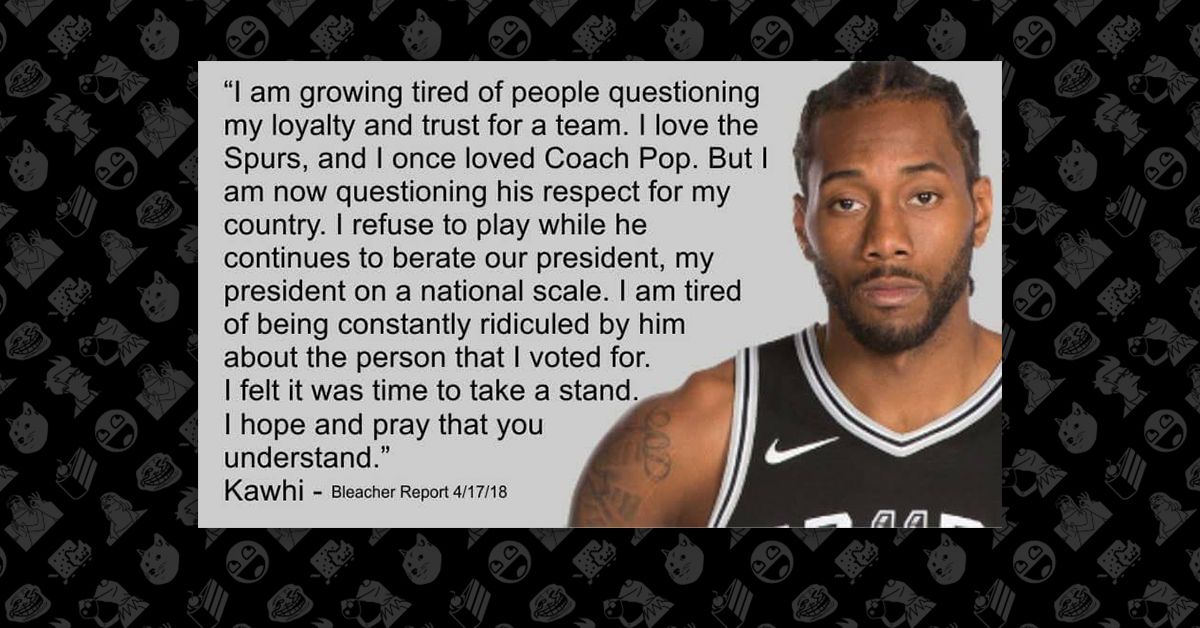 Claim:
Kawhi Leonard said that he refused to play for the San Antonio Spurs because of coach Gregg Popovich's anti-Trump comments.
Rating:

As reporters speculated about what was happening behind the scenes between Kawhi Leonard, coach Gregg Popovich, and the rest of the San Antonio Spurs organization at the start of the 2018 playoffs, a fake quote appeared in meme form: I am growing tired of people questioning my loyalty and trust for a team. I love the Spurs, and I once loved Coach Pop. But I am now questioning his respect for my country. I refuse to play while he continues to berate our president, my president on a national scale. I am tired of being constantly ridiculed by him about the person that I voted for. I felt it was time to take a stand. I hope and pray that you understand.

This is not a genuine quote from Kawhi Leonard. It does not appear in any news report published in any credible publication. In fact, the fake quote appears to have originated with parody Facebook page "Black Adam Schefter." (Adam Schefter is a reporter for ESPN.)

Leonard, who is recovering from a lingering quad injury, was not at the San Antonio Spurs' first few playoff games in 2018, and there has been some speculation that the NBA player is at odds with the organization. The fictional phrase was likely created to take advantage of Spurs fans worried about the star's future.

This quote may have also seemed plausible as it was published on the heels of a report from the Washington Post about how Popovich's open criticism of President Donald Trump has turned off some Spurs fans:

Since the presidential campaign, Popovich has shared his disdain for Trump. He has called the United States “an embarrassment to the world” and the president a “soulless coward” and a “pathological liar.” The veteran coach is disgusted by comments he called “xenophobic, homophobic, racist, misogynistic” — “and I live in a country where half the people ignored all that to elect someone. That’s the scariest part of the whole thing to me,” he said after the election.

“It is sad that Pop basically told my wife and my son and me for that matter that we were fools for supporting Donald Trump,” he said. “What happens when someone calls you a fool? You avoid them.”

We attempted to find a genuine quote from Leonard about his coach's politics, but have so far come up empty-handed. As far as we can tell, the soft-spoken NBA star has never weighed in on Popovich's political views, nor he has offered up many of his own. Although we are not sure of where Kawhi Leonard lands on the political spectrum, the viral quote about his refusal to play for a coach who criticizes President Trump was completely invented.