Did the Taliban Endorse Trump While Scientific Community Endorsed Biden?

A popular tweet used a shaky comparison to differentiate the U.S. presidential candidates in 2020. 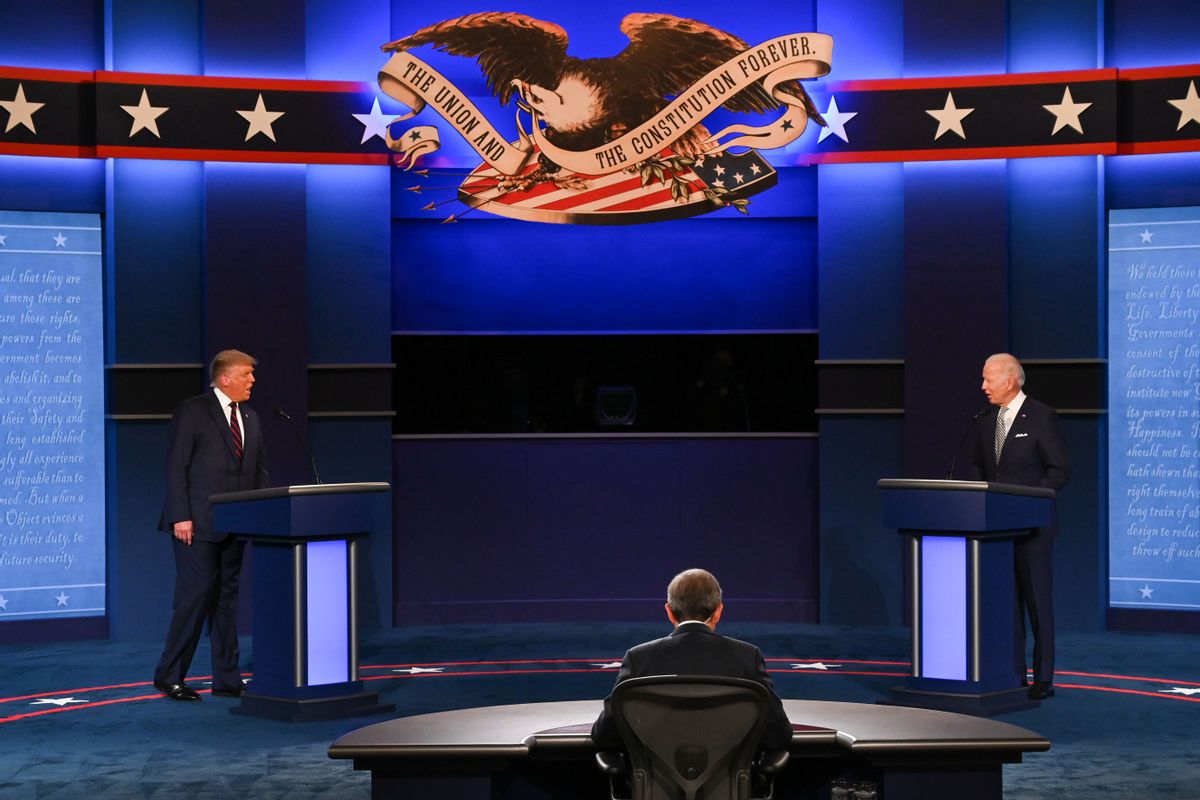 Claim:
Before the 2020 U.S. presidential election, the Taliban and the Ku Klux Klan endorsed U.S. President Donald Trump while his Democratic opponent, Joe Biden, was “endorsed by a broad bipartisan coalition and the New England Journal of Medicine.”
Rating:

The Ku Klux Klan (KKK) and its former grand wizard David Duke have endorsed U.S. President Donald Trump since his initial campaign in 2016, although the Trump administration has repeatedly rejected that endorsement. Scientific American took an unprecedented step in 2020 by endorsing Democratic candidate Joe Biden, marking the first time in its 175-year history to weigh in on a presidential election.

A spokesperson for the Taliban denied endorsing Trump, whose campaign also rejected the alleged 2020 backing from the group. The New England Journal of Medicine said the country's current political leaders “have demonstrated that they are dangerously incompetent" and "this election gives us the power to render judgment," but it did not refer to Biden or Trump by name.

As the 2020 U.S. presidential election inched closer, the internet was flooded with misleading memes about both candidates, including the allegation that extremist organizations like the Taliban and Ku Klux Klan supported U.S. President Donald Trump, while the New England Journal of Medicine (NEJM) and other bipartisan groups openly endorsed Democratic candidate Joe Biden.

The claims were first put forth by screenwriter and author Bess Kalb, whose work has been featured on "Jimmy Kimmel Live!" and The New Yorker. In a Twitter post shared on Oct. 11, she suggested that extremist groups supported Trump while implying that more even-keeled organizations backed Biden. At the time of publication, the tweet had received more than 370,000 likes. Although Kalb didn't specify in the tweet which candidate received endorsements from whom, it was perfectly clear to anyone following news about the presidential campaigns at the time which was which: Biden's endorsers included the magazine Scientific American, and the Trump campaign had publicly rejected an alleged endorsement from the Taliban.

To verify Kalb's claim, we broke it down into four sections to address each of her assertions. Like much viral content, her statement contained kernels of truth that had been taken out of context or were inaccurately represented.

Did the Taliban Endorse Trump?

In October 2020, CBS News claimed to have spoken with Zubihullah Mujahid, a spokesperson of the Islamic Emirate of Afghanistan, or Taliban, who allegedly told the publication that the extremist group believed that Trump would win the November 2020 election. In an exclusive telephone interview, Mujahid reportedly said that Trump had "proved himself a politician who accomplished all the major promises he had made to American people."

Another “senior Taliban leader” said that the organization hoped Trump “will win the election and wind up U.S. military presence in Afghanistan." CBS News added that the Taliban’s enthusiasm for Trump “is grounded in the goal they share of getting U.S. troops out of Afghanistan after 19 years of war — a longtime promise of the president.”

However, Mujahid denied the claims made by CBS News and wrote in an Oct. 10 tweet that the publication had misinterpreted his remarks. A subsequently translated tweet shared as a comment added that “nothing like what they published has happened.” Tim Murtaugh, a spokesperson for the Trump campaign, told Axios in an emailed statement, “We reject their support and the Taliban should know that the President will always protect American interests by any means necessary, unlike Joe Biden who opposed taking out Osama bin Laden and Qasem Soleimani." In an Oct. 10 tweet, Murtaugh added that he had told CBS News that the Trump campaign rejected the endorsement. Snopes attempted to contact Murtaugh on Twitter but did not receive a response in time for publication. Our message to the Trump campaign also went unanswered.

Has the KKK Backed Trump Since His 2016 Campaign?

At the announcement of Trump’s 2016 bid, the KKK published a full-page spread supporting Trump in its official quarterly newspaper, The Crusader. In an interview with MSNBC, Trump said that that he disavowed former KKK leader David Duke and that his campaign rejected the endorsement, issuing the following statement to news outlets in 2016:

“Mr. Trump and the campaign denounces hate in any form. This publication is repulsive and their views do not represent the tens of millions of Americans who are uniting behind our campaign.” The KKK endorsement followed the Trump presidency for years. It resurfaced again in January 2020 when a manipulated photo claimed to show a group of KKK members marching behind a campaign sign for Trump and Vice President Mike Pence. A message accompanying the meme at the time claimed, “This is all you need to know about why you should vote Blue in 2020. As our previous fact check concluded, the photograph in question was not genuine — it was taken during a march in Pulaski, Tennessee, in July 2009. The banner actually read, “Fraternal White Knights of the Ku Klux Klan.”

White supremacist and former Grand Wizard David Duke, whose Twitter account was suspended in October 2020, has expressed support for Trump on more than one occasion. In a video shared to Twitter by verified photojournalist Mykal McEldowney of the Indy Star (which has been archived here) from the Aug. 12, 2017, Unite the Right rally in Charlottesville, Virginia, the former KKK leader offered support to the president.

Trump expressed disapproval of Duke and disavowed white supremacy on "Good Morning America" in 2016. During a televised debate on Sept. 29, 2020, the president was asked to clearly and explicitly condemn white supremacy, which he failed to do on that occasion, though he did condemn "all white supremacists," mentioning the KKK specifically, during a Fox News interview two days later.

In 2020, Did NEJM Take Its First Stance on a Presidential Election in More Than 200 Years?

NEJM, an esteemed medical journal that publishes research and reviews articles, took an unprecedented step when it published an Oct. 8 editorial urging voters to render judgment on the current political leaders, adding that they were “dangerously incompetent” in their ignorance and handling of the pandemic.

The column, titled “Dying in a Leadership Vacuum,” did not explicitly name Trump, nor did it acknowledge Biden. Rather, it laid blame on a failing leadership and administration that inadequately responded to the COVID-19 pandemic, further polarizing and politicizing Americans while disenfranchising vulnerable communities and leaving behind health care professionals who have “put their lives on the line.”

By making masks “political tools rather than effective infection control measures,” continuing to push inaccurate guidelines, and deferring to pandemic responses at the state level — many of which did not have adequate resources to fight such a public health crisis without the support of the federal government — the publication argued that U.S. leaders ignored and “even denigrate[d] experts,” furthering that the COVID-19 response a was a failure that had “taken a crisis and turned it into a tragedy.”

The editorial went on to say the following:

The response of our nation’s leaders has been consistently inadequate. The federal government has largely abandoned disease control to the states. Governors have varied in their responses, not so much by party as by competence. But whatever their competence, governors do not have the tools that Washington controls. Instead of using those tools, the federal government has undermined them. The Centers for Disease Control and Prevention, which was the world’s leading disease response organization, has been eviscerated and has suffered dramatic testing and policy failures. The National Institutes of Health have played a key role in vaccine development but have been excluded from much crucial government decision making. And the Food and Drug Administration has been shamefully politicized, appearing to respond to pressure from the administration rather than scientific evidence. Our current leaders have undercut trust in science and in government, causing damage that will certainly outlast them. Instead of relying on expertise, the administration has turned to uninformed “opinion leaders” and charlatans who obscure the truth and facilitate the promulgation of outright lies.

Anyone else who recklessly squandered lives and money in this way would be suffering legal consequences. Our leaders have largely claimed immunity for their actions. But this election gives us the power to render judgment. Reasonable people will certainly disagree about the many political positions taken by candidates. But truth is neither liberal nor conservative. When it comes to the response to the largest public health crisis of our time, our current political leaders have demonstrated that they are dangerously incompetent. We should not abet them and enable the deaths of thousands more Americans by allowing them to keep their jobs.

Was Biden Endorsed by a 'Broad Bipartisan Coalition'?

It is unclear what “broad bipartisan coalition” Kalb refers to in her tweet; however, both candidates indeed have a long list of endorsements from both sides of the political aisle. Most notably, in mid-September Scientific American backed Biden, marking it the second publication to break stride in endorsing a presidential candidate for the first time in its history. Again, the editorial board cited Trump’s rejection of science and pandemic response as a catalyst.

"The evidence and the science show that Donald Trump has badly damaged the U.S. and its people — because he rejects evidence and science. The most devastating example is his dishonest and inept response to the COVID-19 pandemic, which cost more than 190,000 Americans their lives by the middle of September," wrote the publication.

"He has also attacked environmental protections, medical care, and the researchers and public science agencies that help this country prepare for its greatest challenges. That is why we urge you to vote for Joe Biden, who is offering fact-based plans to protect our health, our economy and the environment. These and other proposals he has put forth can set the country back on course for a safer, more prosperous and more equitable future."

A list of endorsements from political leaders and labor unions can be found on Biden’s official campaign website, but as with most political candidates, the majority of his endorsers are partisan. Those include activist groups built around the platforms of LGBTQ, environmental, animal, women’s reproductive rights, and labor unions representing dozens of industries from across the nation. That being said, a number of established newspapers have also endorsed the former vice president, including The Washington Post, The New York Times, and The Boston Globe. By comparison, Trump is backed by activist groups that include religious organizations, law enforcement, and pro-life organizations. Trump has been endorsed by a handful of publications, including The Boston Herald and The Tulsa Beacon. (You can view a full list of Trump endorsements here.)

In the weeks that led up to the general election in 2020, discord and contention dominated U.S. political discourse. As with many viral and political posts, memes, videos, or content, elements of truth are not fully represented in a short character count. Generally speaking, this claim was based in truth but lacked the context needed to characterize both the Trump and Biden campaigns accurately.