Did the King of the Netherlands Tell Donald Trump That The Hague Is Waiting for Him?

A parody account posing as Willem-Alexander of the Netherlands tweeted that the International Court of Justice was waiting for the United States president. 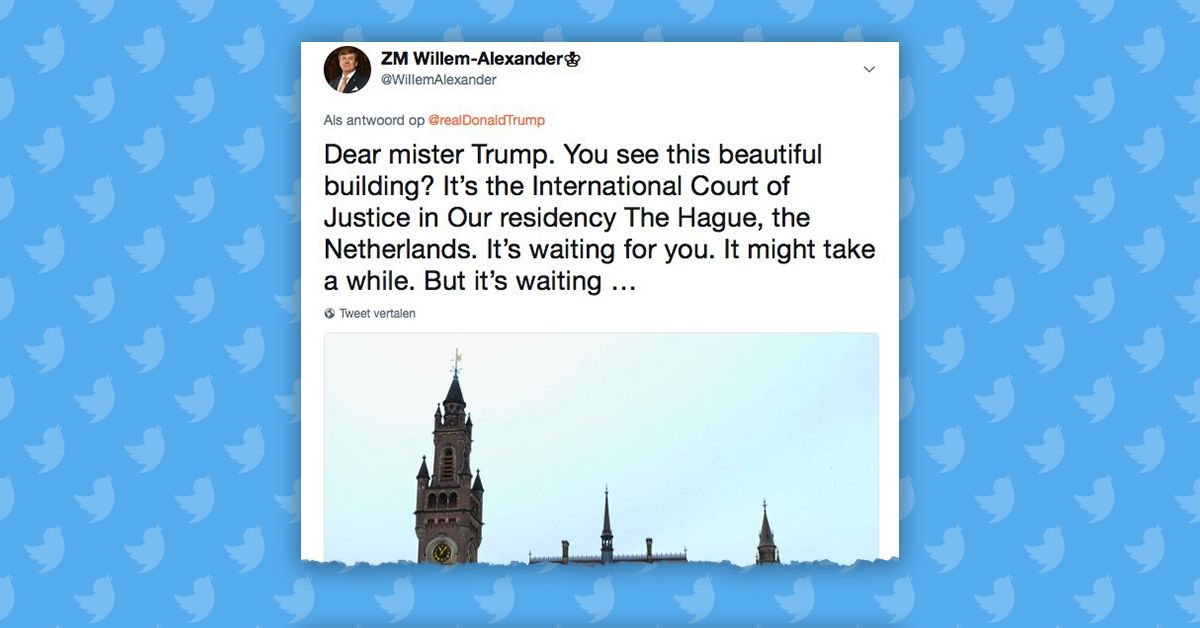 Claim:
The king of the Netherlands tweeted that the International Court of Justice in the Hague is ready and waiting for Donald Trump.
Rating:

A screenshot purporting to show a message posted by King Willem-Alexander of the Netherlands directed at United States President Donald Trump was picked up by the Washington Press blog on 19 June 2018:

The Trump administration has a penchant for its dismal optics and an almost impressive ability to continue lowering the bar to previously unknown depths. This week, Trump and his tribalistic cohorts opted to punish those seeking asylum along the southern border by implementing a “zero-tolerance” policy that would call for the separation of parents and their children, an act so inhumane that it is inviting comparisons to Japanese internment camps of World War 2 and even the Holocaust.

But the international community has been especially outspoken in its opposition to this administration’s visibly inhumane agenda, including the purported account of Willem-Alexander Claus George Ferdinand, the King of the Netherlands, who posted a less-than-subtle threat to a president vying for his spot as one of the cruelest world leaders of this century. This is not genuine. Washington Press later deleted their article, but this rumor continued to spread on social media; other sites still had similar stories available as of 22 June 2018.

The tweet actually originated from a parody account posing as the the Netherlands' king. Although it is difficult to tell simply by looking at this account's Twitter handle, the (unverified) page spells the name Willem as "wiiiem" instead of "wiLLem," a common and effective tactic with parody accounts that makes it nearly impossible to tell the difference at first glance.

However, when we changed the font to Courier New, it becomes much more obvious that the name was purposefully misspelled in order to better trick readers and viewers:

The King of the Netherlands did not threaten President Trump on Twitter. This message originated with a parody account posing as Willem Alexander.