DeRay Mckesson and the Summer of Chaos 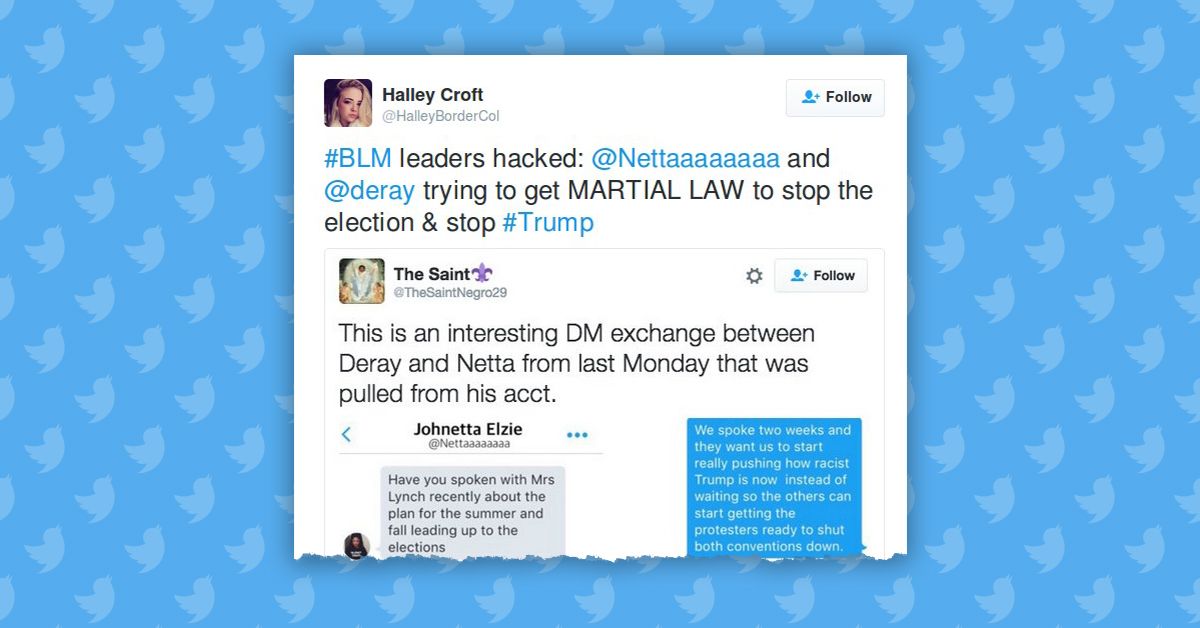 Shockingly, in a private message purportedly obtained and released by the hackers, Samuel Sinyangwe, a Black Lives Matter activist, said that law enforcement officials “will not be ready for the type of crowds” that the group will be bringing which are designed to shutdown the convention and create “disruptions nationwide.”

The group plans to bring more than 10,000 people to create chaos July 18-21 in both Philadelphia and Cleveland, according to the leaked PMs.

To top it all off, the “Summer of Chaos” plan goes all the way up to the Obama Administration and even involves U.S. Attorney General Loretta Lynch, according to leaked messages.

As you can see in the Tweets below, this operation goes all the way to the U.S. Department of Justice with mention of “Mrs. Lynch.”

The item included purported screenshots of conversations between Mckesson and other activists: Similarly unreliable outlet DC Clothesline repeated the rumor on 6 July 2016, reiterating that "U.S. Attorney General Loretta Lynch is coordinating with Democratic activists to so disrupt the upcoming Republican and Democratic National Conventions that martial law will be declared." The item included transcriptions of the circulating screenshots of conversations between Mckesson and fellow activist Johnetta Elzie:

JE: “Have you spoken with Mrs. Lynch [Attorney General Loretta Lynch] recently about the plan for the summer and fall leading up to the elections.”

DM: “We spoke two weeks and they want us to start really pushing how racist Trump is now instead of waiting so the others can start getting the protesters ready to shut both conventions down.”

DM: “If we can get both conventions shut down for messing over Bernie and for having racist Trump, then get martial law declared so Obama can stay in office we will win. Call you soon when I get to my dads so I can use his landline and we can talk more on this.”

DM: “We have to make sure that we use our voices to keep people disrupting Trump all summer and through the fall so martial law can be declared….”

S: “I wanted to touch base with you about the summer of chaos. So far we have over 2,000 people bused in from different cities and another 6,000 to 8,000 expected to drive into Cleveland for the Convention.”

S: “They will not be ready for the crowds we are bringing and they will blame Trump for it, especially if we shut it down. The GOP will have to replace him at that point or we will continue the disruptions nationwide.”

DM: “I will pass the info along. Good work, Sam. You never let us down. It’s so important we stop Trump. He can not be president. He will destroy everything we worked so hard for and we can’t trust….”

DM: “…today and he [Sam?] confirmed that there will be around 10,000 protesters disrupting the [Republican] convention. Plans are being made for other cities as well for upcoming Trump events. Ads have already been placed looking for people to help. I know you don’t care for them [white people] but this is the time we need our white allies doing a lot of the work for us. They are the ones who listen the best.”

JE: “That will put fear into the GOP and the country when they can’t have their convention for all their racist supporting Trump. We’ve worked too hard and closely with the Obama administration to have that racist ass take it all away and Hillary…. You know I can’t stand those white allies, but yo right this is the best to use them. They hang on every word you say and will do whatever is asked. I just hate all that kiss ass they try to do. Like that changes who they are.”

DM: “We have a lot of white allies volunteering for Trump’s campaign to pass along information to us before it’s made public so we know when rallies are coming up before they are announced. That way we can plan major disruptions in those cities in advance. We just have to keep our names out of this and let these [white] people do the work for us by pushing how Trump’s racist ways will destroy….”

JE: “That’s all those white people are good for in my eyes. I couldn’t imagine even pretending to like that racist ass Trump even to get info on his events. I’ll be glad when we shut his ass down.”

DM: “With the support we have from Mrs. Lynch and the help we’ve got from Sam and others it won’t be hard to cause enough….”

The transcript and messages contained an implausible level of detail for ongoing discussions (of which those involved would already be apprised), involving hard-to-swallow exposition ensuring those who read them weren't left wondering who the players involved or desired outcome of the plotting might be. Had Mckesson and his collaborators truly been engaged in complex, high-level planning with the assistance of the Obama administration, the messages would likely involve broad terms used among individuals already immersed in the plots. Referencing Lynch by name was unnecessary save to create the connection desired, and presumably a conspiracy of that level would occur on a far more secure channel of communication.

The article concluded with credible but largely unrelated proofs arranged to appear as if they supported the claim:

As reported by Alice Speri for The Intercept, June 23, 2016, local police and federal agents from the FBI, DHS, and Secret Service are knocking on the doors of activists and community organizers in Cleveland asking about their plans for the Republican National Convention in July.

On June 29, 2016, Deray McKesson sort of confirmed the plan when he went public with warnings about “possible” protests at the DNC and RNC, as reported by USA Today.

In fact, a recent survey showed that as many as 67% of Democrats want Obama for a third term.

Intellihub referenced the hacking of Mckesson's accounts, which occurred on or around 10 June 2016. Subsequent reports explained that individuals posing as Mckesson gained control of his high-profile Twitter account:

After he regained control of his Twitter account, he explained that the attackers managed to do the deed by convincing Verizon to reset his SIM. That way, the hijacker or hijackers managed to set it up so they could intercept text messages intended for Mckesson and thereby bypass the 2FA that otherwise should have kept his account secure.

There was social engineering involved: the hacker(s) called Verizon’s billing department and impersonated him. Then, they redirected his phone service to their own phone, so that calls and texts that should have gone to Mckesson’s number went instead to theirs.

Then, they used Twitter’s password reset feature, which relies on authorization codes sent via SMS to a phone. In other words, they didn’t need Mckesson’s password: all they needed was the last four digits of his taxpayer ID and his name to lock him out of his account.

Within days of the hack, the purported screenshots began circulating on Twitter. They quickly gained traction among social media users and bloggers convinced that several years of protests and demonstrations were engineered by the government in an effort to destabilize society, implement martial law, and enable President Obama to cancel the 2016 election and seize a third term in the Oval Office. The screenshots primarily pertained to the "busing" of paid protesters in to disrupt conventions and Donald Trump rallies, and made no mention of shooting law enforcement agents or creating unrest at Black Lives Matter protests.

After the shooting deaths of five Dallas police officers at a peaceful Black Lives Matter protest, the June 2016 claims about Mckesson, Lynch, and a planned "Summer of Chaos" became far more popular on Twitter and other social media platforms. Notably, the tragedy in question bore no resemblance whatsoever to the content of the purported messages; according to the original rumors, Mckesson was the lynchpin of plans to "disrupt ... both conventions" and not unleash violence on a protest he supported several thousand miles away from either later event.

Imposition of martial law has been a consistent fear among Americans for decades, despite the minute chance it could occur in the United States. In September 1863, President Abraham Lincoln essentially imposed a Congressionally-authorized form of martial law via the suspension of habeas corpus (controversial even then). The Supreme Court heard an appeal for a writ of habeas corpus brought by condemned prisoner Lamdin P. Milligan in 1866, who argued his arrest, trial by military tribunal, conviction, and sentence to death by hanging were unconstitutional.

The Court ruled in favor of Milligan, finding that imposition of martial law "destroys every guarantee of the Constitution, and effectually renders the 'military independent of and superior to the civil power'"; Justice David Davis said that in the opinion of the court, no circumstance warranted "either the President or Congress [to seize] the legal right to impose military justice on civilians outside an actual war zone[.]" .

We contacted Mckesson to ask about the rumors and whether the messages were authentic. Mckesson confirmed earlier reports that his account was hacked in June 2016, adding that the messages shared were fabricated by parties unknown after the fact. Given the messages in no way hinted at disruptions to Black Lives Matter protests or violence against police officers prior to the tragedy in Dallas, reference to them as a harbinger of the shootings was moot.

In a sense. the claims were similar to "cold readings" done by psychics, in that the claim's assertions were interpreted as "hits" when in fact the details were entirely off-base.  Regardless of their "accuracy," Mckesson stated that the messages were not authentic.