Did Dems Write to Ukrainians in 2018 Asking Them to 'Investigate Trump'?

Three Democratic senators reached out to Yuriy Lutsenko, the prosecutor general of Ukraine, in May 2018. 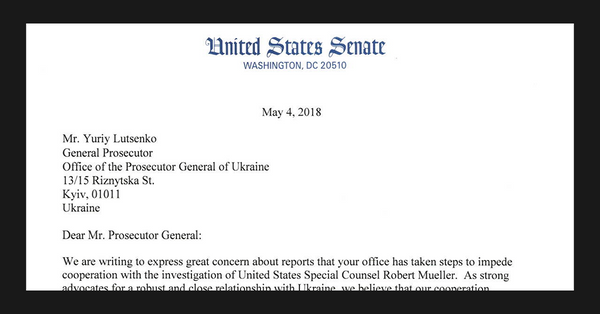 Claim:
Democratic senators “sent a letter to the prosecutor in Ukraine” in 2018 asking him to "investigate Trump.”
Rating:

Revelations came to light in fall 2019 that U.S. President Donald Trump asked Ukrainian President Volodymyr Zelensky to investigate current Democratic presidential front-runner Joe Biden and his son. In response, the president’s defenders have highlighted a May 4, 2018, letter signed by three Democratic senators to Yuriy Lutsenko, the prosecutor general of Ukraine (a similar role to the U.S. attorney general), as evidence that claims of improper behavior are misplaced. The letter was notably described by Washington Post columnist Marc Theisen as betraying a “double standard.”

This sentiment was amplified by several media outlets, as well as a viral tweet (retweeted by Donald Trump Jr.) from the Twitter account Comfortably Smug, which according to BuzzFeed News is run by a “Republican political consultant and deliberate spreader of false information”: Several reasons exist why the above tweet and associated sentiment are incorrect and misleading. At the top of that list is the fact that the letter in question did not concern a request to “investigate Trump,” nor did it request the opening of any investigation.

Instead, it requested information on why Ukrainian special prosecutor Serhiy Horbatyuk (who serves in a special prosecutor role charged with investigating corruption cases linked to former Ukrainian president Viktor Yanukovich) had been “prohibited” from “issuing subpoenas for evidence or interviewing witnesses” in four existing investigations into former Trump Campaign Manager Paul Manafort. Manafort, prior to joining the Trump campaign, had worked as a political consultant for Yanukovich and his political party. The four investigations involved money that flowed either to Manafort for this consulting work or to a law firm working with Manafort and others to improve Yanukovich’s image in the West. They did not involve Trump.

The three Democratic senators — then-Foreign Affairs Committee members Robert Menendez, Dick Durbin, and Patrick Leahy — were responding to a May 2, 2018, New York Times report that the four Manafort investigations in Ukraine were specifically singled out from a docket of nearly 3,000 corruption cases in Horbatyuk’s portfolio to be blocked from issuing subpoenas and interviewing witnesses. U.S. Special Counsel Robert Mueller, in his charge to investigate Russian interference in the 2016 presidential election, was investigating Manafort in part because of concerns that he owed substantial funds to Russian oligarchs as a result of this consulting work, potentially giving them leverage over him as he ran Trump's campaign. The reason Ukrainian officials impeded the investigation was no secret, according to the Times — it was to placate the Trump administration, which opposed the Mueller probe:

Volodymyr Ariev, a member of Parliament who is an ally of [now former] President Petro O. Poroshenko, readily acknowledged that the intention in Kiev was to put investigations into Mr. Manafort’s activities “in the long-term box.”

“In every possible way, we will avoid irritating the top American officials,” Mr. Ariev said in an interview. “We shouldn’t spoil relations with the administration.”

These discussions came at a complicated time for Ukraine, a country that has been fighting Russian aggression and that had been in the process of securing arms from the United States. “The decision to halt the investigations by an anti-corruption prosecutor was handed down as the Trump administration was finalizing plans to sell the country sophisticated anti-tank missiles, called Javelins,” the Times reported.

Far from requesting an “investigation”, the senators requested answers to three specific questions from a specific Ukrainian government official:

Manafort broadly admitted to involvement in activities related to those four Ukrainian probes via a September 2018 guilty plea.

Even ignoring the allegedly implied quid pro quo in the Trump-Zelensky call, a comparison between the senators’ request for information from the chief Ukrainian law enforcement official and Trump’s requests of Zelensky is problematic.

As senators on the Committee on Foreign Relations, which not only provides oversight for arms deals but also general oversight of America’s relationships with its allies, Menendez, Durbin, and Leahy were acting within their constitutional rights and obligations as official representatives of the U.S. government with oversight responsibility over the executive branch.

Conversely, in his July 25 phone call with Zelensky, Trump explicitly requested that the Ukrainian president meet with his personal attorney, Rudy Giuliani — an unelected private citizen without a security clearance or oversight from anyone but Trump — to initiate investigations into a disparate set of claims whose sole unifying feature is that they concern Trump’s political rivals: the Democratic National Committee and the Biden family.

Because the letter at issue did not actually demand an investigation into Trump or even compel initiation of any investigation, we rank the claim that Democrats asked Ukraine to “investigate Trump” in 2018 as false.

Vogel, Kenneth and Matthew Goldstein.   “How Skadden, the Giant Law Firm, Got Entangled in the Mueller Investigation.”     The New York Times.   24 February 2019.