Were Democrats Absent from a U.S. Senate Hearing on Border Security?

A photograph shows a bunch of empty Senate chairs during the hearing. 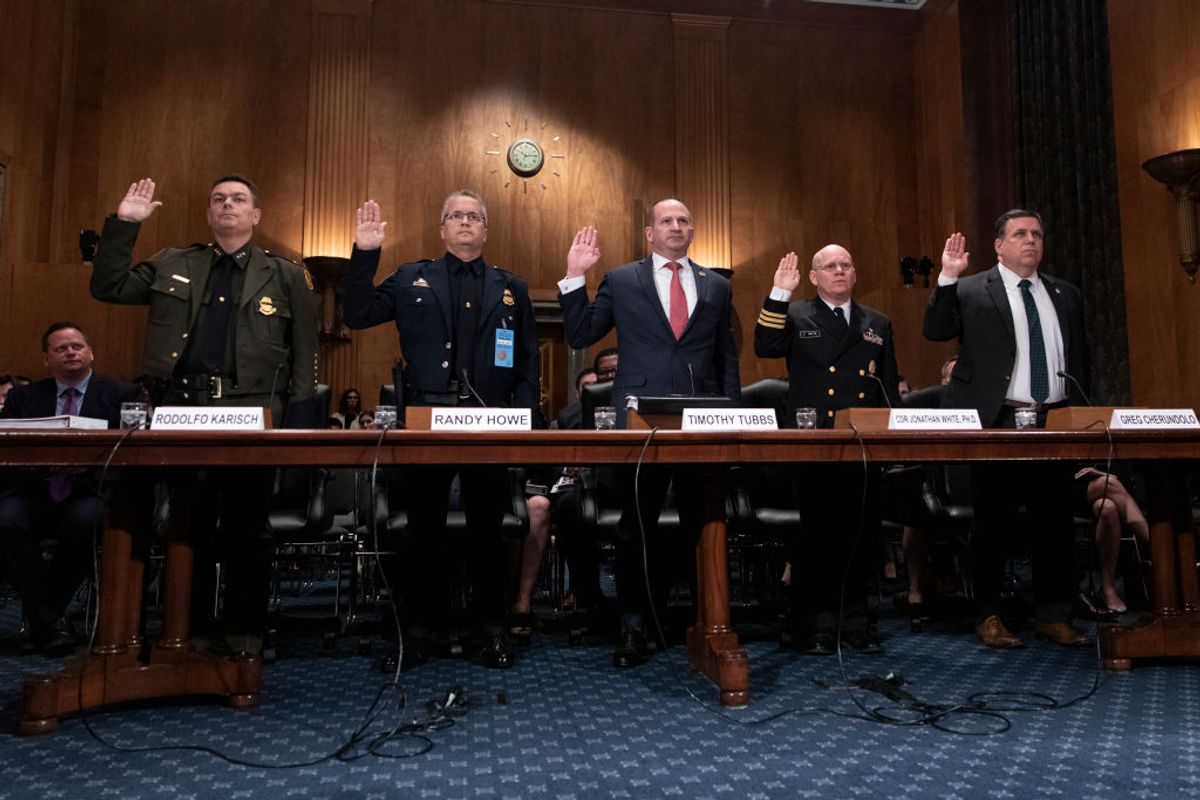 Claim:
Not a single Democrat was present during a U.S. Senate hearing on border security in April 2019.
Rating:

In mid-April 2019, an image showing several empty seats on a panel during a U.S. Senate committee hearing on border security started to circulate on social media. While this image was real, a number of social media accounts attempted to use it as partisan fodder and claimed that it showed "not one democrat" bothered to attend this hearing: This is a genuine still photograph (minus the red circles) from a 9 April 2019 U.S. Senate Homeland Security Committee hearing on Capitol Hill concerning border security. However, it documents a moment in which nearly all lawmakers (not just Democrats) were absent due to a vote on an unrelated matter that needed to be cast in another location. In fact, when Fox News correspondent Griff Jenkins posted a similar image of these empty chairs, he noted that "not a single senator" had stayed to listen to border-patrol officials make their closing statements to Chairman Ron Johnson:

As @CBP and @CBPRGV officials make closing statements before the the Senate Homeland Security Cmte, not a single senator stayed to listen save the Chairman @SenRonJohnson #border #emptychairs pic.twitter.com/WqyOHs0NIX

While many members of this committee were absent during the moment captured in the viral still image, they were present at other parts of the hearing. Here's an image of Peters, for instance, as he made his opening remarks: Attending and asking questions at a hearing is one of the many responsibilities senators have on Capitol Hill. As these hearings are often several hours long, they can overlap with other responsibilities, such as casting a vote. That appears to be the main reason why lawmakers were absent during the final minutes of the hearing.

Near the start of the hearing, Johnson thanked the committee members for their attendance and said that he would hold off on asking his own questions until the end, as some members would have to leave before the conclusion of the hearing to vote on an unrelated matter.

Johnson said: "I really appreciate the attendance here by members, so I'll defer my questioning to the end. We do have a vote we have to deal with 11 o'clock. It's my intention to keep the hearing going. Hopefully we get some cooperation from committee members."

Sen. Mitt Romney (R-Utah) also noted that he would have to leave the hearing due to this this conflicting vote, saying: "I may have to leave before all of your answers are given because of a vote that's underway that will be over in just a few minutes."

The full hearing, which features both Republicans and Democrats lawmakers asking questions of border patrol officials, can be seen below: