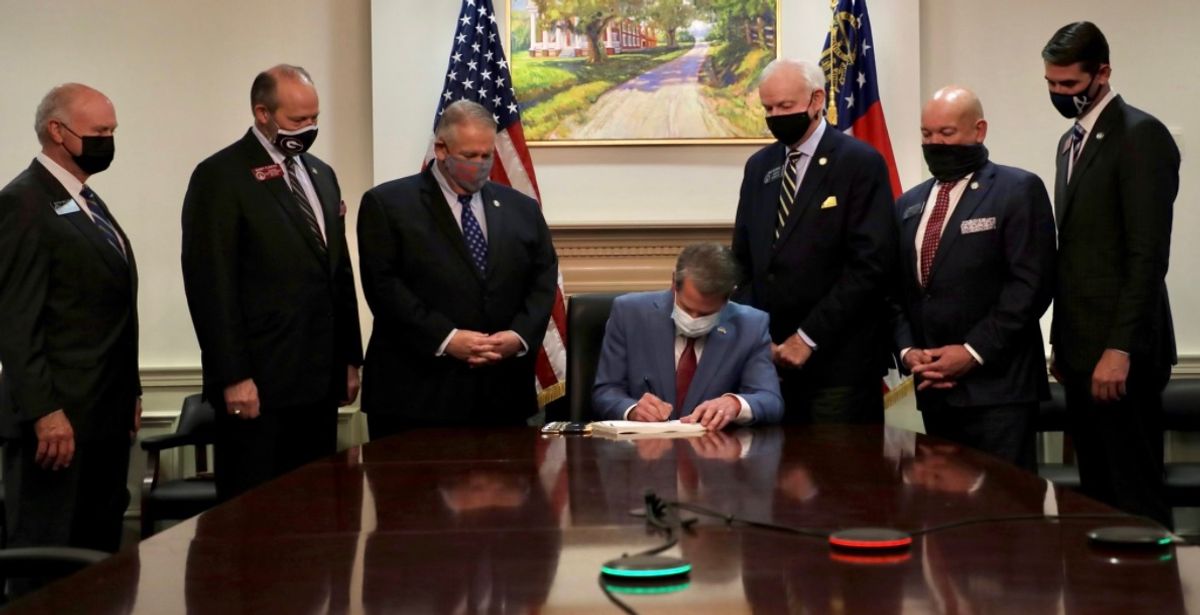 Delta CEO Ed Bastian did issue a statement that speaks in favorable terms of the final version of the bill signed into law. In the statement, Bastian singled out for praise aspects of the new law that expand voter access. But he also said the company understands "concerns remain" about other aspects of the law, and that "there continues to be work ahead in this important effort." After receiving strong backlash from voting rights advocates, Bastian issued a second statement that calls the law "wrong" and "based on a lie" about widespread voter fraud.

In late March 2021, various social media users posted that Delta Air Lines, which is based in Atlanta, Georgia, issued an "internal" communication to employees "praising" a new Georgia election law.

Critics from voting rights advocates in Georgia to U.S. President Joe Biden have slammed the law, SB202, which passed the Republican-controlled state Legislature on party lines. Critics argue it exploits a disinformation campaign pushed by former U.S. President Donald Trump about a widespread voter fraud conspiracy in an effort to suppress the Black vote.

The above statement issued by Delta CEO Ed Bastian is real, and although it may have been sent to Delta employees internally as the political action committee MediasTouch stated in its tweet, it was also published as a news release by the company on its website. Bastian's statement reads:

Delta believes that full and equal access to voting is a fundamental right for all citizens. Over the past several weeks, Delta engaged extensively with state elected officials in both parties to express our strong view that Georgia must have a fair and secure election process, with broad voter participation and equal access to the polls. The legislation signed this week improved considerably during the legislative process, and expands weekend voting, codifies Sunday voting and protects a voter’s ability to cast an absentee ballot without providing a reason. For the first time, drop boxes have also been authorized for all counties statewide and poll workers will be allowed to work across county lines. Nonetheless, we understand concerns remain over other provisions in the legislation, and there continues to be work ahead in this important effort. We are committed to continuing to listen to our people and our communities, and engage with leaders from both parties to ensure every eligible employee and Georgia voter can exercise their right to vote.

Delta, along with other Georgia-based companies like Coca-Cola and Home Depot, have been under intense pressure from voting rights activists to shun the legislation and its backers.

Whether one describes Bastian's statement as full-throated "praise" for the new law is subjective; however, it does speak favorably of the law as passed and notes that the company engaged lawmakers on both sides to ensure that it "improved considerably" from its initial form. But it also singles out for praise aspects of the bill that could expand access, like the fact that the law expands early voting, requires all counties to have mail-in ballot drop boxes, and allows poll workers to cross county lines if the need arises.

It earned Delta strong backlash and threats of a boycott.

"Georgia companies can’t have it both ways,” Nsé Ufot, chief executive officer of the New Georgia Project Action Fund, told Bloomberg in a statement. “It is completely unacceptable to praise the bills that take away our most fundamental American right to vote and simultaneously profit off of our dollars. Their low-key betrayal has now become completely blinding."

We reached out to Delta asking what its role was in crafting the legislation and whether it had any further comments on the criticism over Bastian's statement, but didn't get an answer in time for publication. We will update if we hear back.

On March 31, Bastian issued a second statement describing the new law as "wrong." It said, in part:

After having time to now fully understand all that is in the bill, coupled with discussions with leaders and employees in the Black community, it’s evident that the bill includes provisions that will make it harder for many underrepresented voters, particularly Black voters, to exercise their constitutional right to elect their representatives. That is wrong.

The entire rationale for this bill was based on a lie: that there was widespread voter fraud in Georgia in the 2020 elections. This is simply not true. Unfortunately, that excuse is being used in states across the nation that are attempting to pass similar legislation to restrict voting rights.

As U.S. News and World Report notes, Georgia has become the epicenter of focus on new legislation that cropped up in many states in the aftermath of November 2020 election disinformation. Georgia's new law is "just one of more than 200 measures that have been introduced around the country since November that could limit access related to voter registration, early and absentee voting and tighten voter ID laws."

The 98-page Georgia law, signed by Gov. Brian Kemp on March 26, 2021, takes sweeping aim at the state's current election practices, according to an analysis by Georgia Public Broadcasting. It cuts the amount of time voters have to request and return mail-in ballots and tightens ID requirements. It also places new restrictions on government agencies and third-party groups sending mail-in ballot applications to voters.

According to The Associated Press, some of the most controversial changes include giving the state election board more control over local election offices, which raised concerns that "the Republican-controlled state board could exert more influence over the administration of elections, including the certification of county results," and making it a misdemeanor to hand out snacks and drinks within 150 feet of a polling place or 25 feet from voters standing in line.