Did NYC Mayor Bill de Blasio Once Support the Sandinista Govt. in Nicaragua?

In May 2019, social media posts targeted the would-be 2020 Democratic presidential nominee for his past political positions, as well as his decision to change his name. 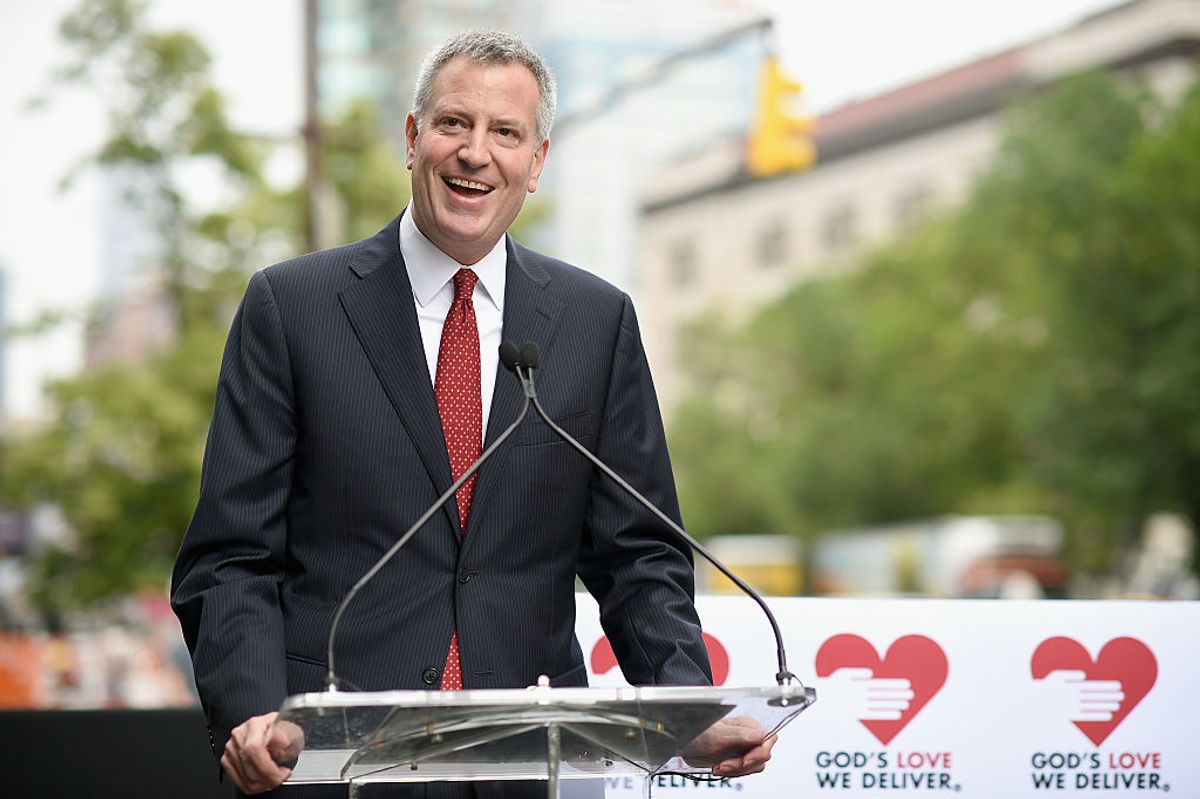 De Blasio was born "Warren Wilhelm" but legally changed his named to "Bill de Blasio" in 2001 for personal reasons having to do with his family relationships. He was a supporter and advocate for the revolutionary socialist Sandinista government in Nicaragua during the 1980s.

Contrary to claims of subterfuge or secrecy on his part, de Blasio has publicly discussed the deeply personal and somewhat traumatic reasons for his decision to change his name. Furthermore, while he was during the 1980s a strong supporter of the Sandinistas, de Blasio has more recently articulated a measure of criticism of the movement.

In May 2019, a widely shared Facebook post made several interesting claims about the personal background and history of New York mayor Bill de Blasio, who had just announced that he was in the running for the Democratic nomination for U.S. president in 2020.

On 17 May, a Facebook user posted what appeared to be a photograph of de Blasio in his younger days, along with the following caption: "Meet Warren Wilhelm Jr. He worked for the Quixote Center, which strongly supported the Marxist–Leninist ruling government of Nicaragua, the Sandinista National Liberation Front. Warren, better known as Bill de Blasio, is the current mayor of New York ... he also announced he’s running for president."

Much of the post's content was accurate -- de Blasio was indeed once a strong supporter of the revolutionary socialist Sandinista government in Nicaragua -- but elements of it were somewhat misleading.

The Mayor of New York is not "better known" as Bill de Blasio, a framing that might suggest a certain degree of subterfuge or secrecy on his part. Rather, de Blasio was born Warren Wilhelm but legally changed his name to Bill de Blasio for personal reasons having to do with his relationship with his parents.

This suggestion of dishonesty was made explicit in another May 2019 Facebook meme which incorporated the text the earlier post but added: "*None* of them are who they say they are" in apparent reference to other Democratic presidential candidates:

While de Blasio was once a strong supporter of the Sandinista regime, he has since resiled somewhat from that support and has criticized aspects of the leftist regime, important contextual information that was left out of the May 2019 memes.

The 109th mayor of New York City was born Warren Wilhelm to his parents Warren Wilhem and Maria de Blasio in Manhattan on 8 May 1961. He grew up in Connecticut and later Cambridge, Mass. As a child, he took on the nickname "Bill," as reflected in a 1979 Boston Globe profile of his accomplishments as a 17-year-old student leader named as "Warren (Bill) Wilhelm Jr."

According to a 2013 New York Times article, which was informed by interviews with de Blasio and his family members, Warren Wilhelm Sr., a Harvard economist who received a Purple Heart in World War II, regularly drank to excess and developed a difficult relationship with his wife and children. In 1969, Maria de Blasio filed for divorce, and in July 1979, Wilhelm Sr., who had terminal lung cancer, shot himself to death in Connecticut.

In an interview with the National Public Radio affiliate WNYC in September 2013, de Blasio said he had begun to identify more closely with his mother's side of the family in the months and years leading up to his graduation from high school and his father's eventual suicide. As part of that difficult process, he decided to add his mother's maiden name to his own name in 1979, going by "Warren de Blasio-Wilhelm":

"I had made the initial decision even in the senior year of high school that I was starting to think about the name. ... I asked for one of the diplomas or one of the certificates to have de Blasio put in as a middle name. That was in May and he didn’t die until July so already something was deep in me starting to feel like I really wanted to identify myself at least also with my mother’s side."

According to the New York Daily News, court documents show that the future mayor of New York legally changed his name to Warren de Blasio-Wilhelm in 1983. Our search of records from Kings County Civil Court in Brooklyn showed that he legally changed his name to Bill de Blasio in January 2001, although in practice he had already taken on that name for some years, as evidenced by a 1996 news article that named "Bill de Blasio" as Bill Clinton's re-election campaign director in New York City.

The May 2019 memes were correct in claiming that de Blasio had once been named Warren Wilhelm Jr., but despite the deeply personal reasons for his name changes, which relate to a traumatic family history, de Blasio has publicly discussed them, something that undermines any suggestions of subterfuge or secrecy on his part.

During the 1980s, de Blasio was a strong supporter of the revolutionary socialist government of Nicaragua, formed by the Sandinista National Liberation Front, commonly known as the Sandinistas. The then-mayoral candidate acknowledged his activities in a September 2013 interview with the New York Times, which outlined his political efforts, including a brief visit to Nicaragua in 1988:

Mr. de Blasio, who studied Latin American politics at Columbia and was conversational in Spanish, grew to be an admirer of Nicaragua’s ruling Sandinista party, thrusting himself into one of the most polarizing issues in American politics at the time. The Reagan administration denounced the Sandinistas as tyrannical and Communist, while their liberal backers argued that after years of dictatorship, they were building a free society with broad access to education, land and health care ...

Mr. de Blasio became an ardent supporter of the Nicaraguan revolutionaries. He helped raise funds for the Sandinistas in New York and subscribed to the party’s newspaper, Barricada, or Barricade. When he was asked at a meeting in 1990 about his goals for society, he said he was an advocate of “democratic socialism.”

... The roots of Mr. de Blasio’s progressive brand of politics lie in the shadows of volcanoes, thousands of miles from the city he now hopes to lead, at a decaying health clinic in Masaya, a small Nicaraguan city. Mr. de Blasio, bearded, gawky and cerebral, had arrived in the city as part of a 10-day tour of Nicaragua in 1988, the capstone of the year he spent as an employee of the Quixote Center, a social justice group in Maryland. The center, founded by Catholic leaders, officially did not take sides in the Nicaraguan dispute, though much of its aid went to help families sympathetic to the Sandinistas.

... In 1987, Mr. de Blasio was hired as a political organizer, soon after he finished graduate school at Columbia, earning $12,000 a year. He worked inside the Quixote Center’s Maryland office, converted apartments filled with homegrown squash and peace posters. Hunched over his desk with a phone to his ear — his colleagues likened him to “Big Bird with a beard” — he oversaw efforts to solicit and ship millions of dollars in food, clothing and supplies to Nicaragua. He also proved to be a skilled provocateur, twice being arrested during rallies against United States foreign policy that were held in the Washington area.

In 1990, after the Sandinistas were voted out of power in Nicaragua, de Blasio (using the name William Wilhelm) reflected on the party's time in government in an interview with the New York Times: "They gave a new definition to democracy. They built a democracy that was striving to be economic and political, that pervaded all levels in society."

However, speaking to the Times for its 2013 article, de Blasio somewhat downplayed his support for Sandinistas and articulated a measure of criticism of the movement:

"... Mr. de Blasio said he was also not blind to the party’s imperfections. He said the revolutionary leaders were 'not free enough by any stretch of the imagination,' pointing to their efforts to crack down on dissent by shuttering newspapers and radio stations."

We asked a spokesperson for de Blasio's 2020 presidential campaign whether the mayor still largely stood by his support and advocacy for the Sandinistas, or whether he had regrets about his activities at that time. We did not receive a response in time for publication.