Are These Real Headlines Describing the Deaths of Rush Limbaugh and Abu Bakr al-Baghdadi?

A meme about media coverage of Limbaugh’s death went viral in February 2021. 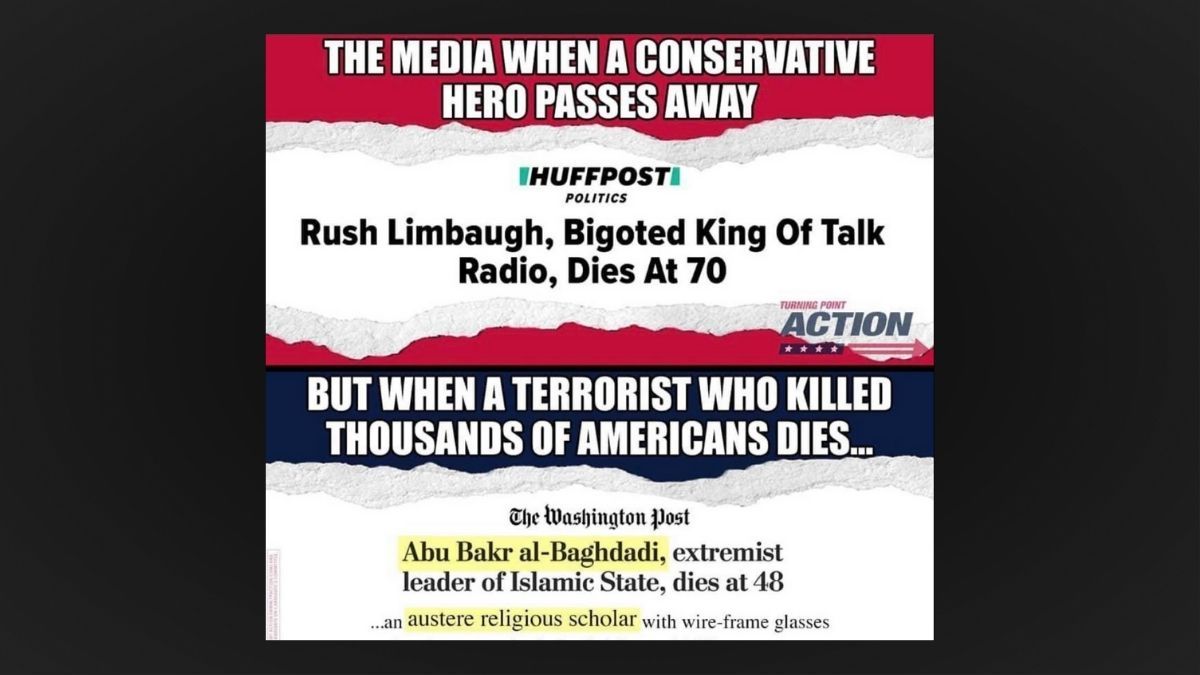 Claim:
A viral meme used actual headlines and verbiage pulled from news coverage of the February 2021 death of Rush Limbaugh and the 2019 death of Islamic State group leader Abu Bakr al-Baghdadi to make a point about media bias.
Rating:

As conservative radio host Rush Limbaugh’s death made the news in February 2021, a viral meme claimed to compare real news coverage of his death vs. that of the 2019 death of Islamic State group leader Abu Bakr al-Baghdadi, in an attempt to make a point about supposed media bias against conservatives. The excerpts used in the meme were indeed pulled from real articles.

On Feb. 17, 2021, a HuffPost headline read, “Rush Limbaugh, Bigoted King Of Talk Radio, Dies At 70.” The second headline appeared atop an October 2019 Washington Post obituary about Abu Bakr al-Baghdadi. It read: “Abu Bakr al-Baghdadi, extremist leader of Islamic State, dies at 48.” The opening paragraph of that article described Baghdadi’s emergence in 2010 as a man few had heard of, “then an austere religious scholar with wire-frame glasses and no known aptitude for fighting and killing.”

Although it was not used in this meme, a version of the Washington Post headline published two hours earlier read, "Abu Bakr al-Baghdadi, austere religious scholar at helm of Islamic State, dies at 48."

At the time of publication in 2019, The Washington Post was widely criticized for that characterization of Baghdadi. Kristine Coratti Kelly, the vice president and communications general manager of Washington Post Live, responded by posting a message on Twitter saying that the headline “should never have read that way.”

Does the meme make an apt point about media bias by contrasting how these two publications covered the deaths of these two particular public figures? That part is subjective. The Washington Post and HuffPost are two very different news outlets, and neither individually nor combined represent the attitudes of the U.S. news media in general. Other news outlets reporting on Baghdadi’s death, for example, did not take the same approach as the Post. Baghdadi was called “brutal” and “blood-soaked” in coverage by The New York Times and The Economist, respectively. We would point out, moreover, that unlike HuffPost's, the headline of The Washington Post's Rush Limbaugh obituary -- “Rush Limbaugh, conservative radio provocateur and cultural phenomenon, dies at 70" -- was the opposite of censorious.

Polemics aside, given that the excerpts used in the meme are authentic, we rate this claim as “True.”