An emotional obituary for David W. Nagy condemned all who have failed to heed the advice of medical professionals during the 2020 coronavirus pandemic. 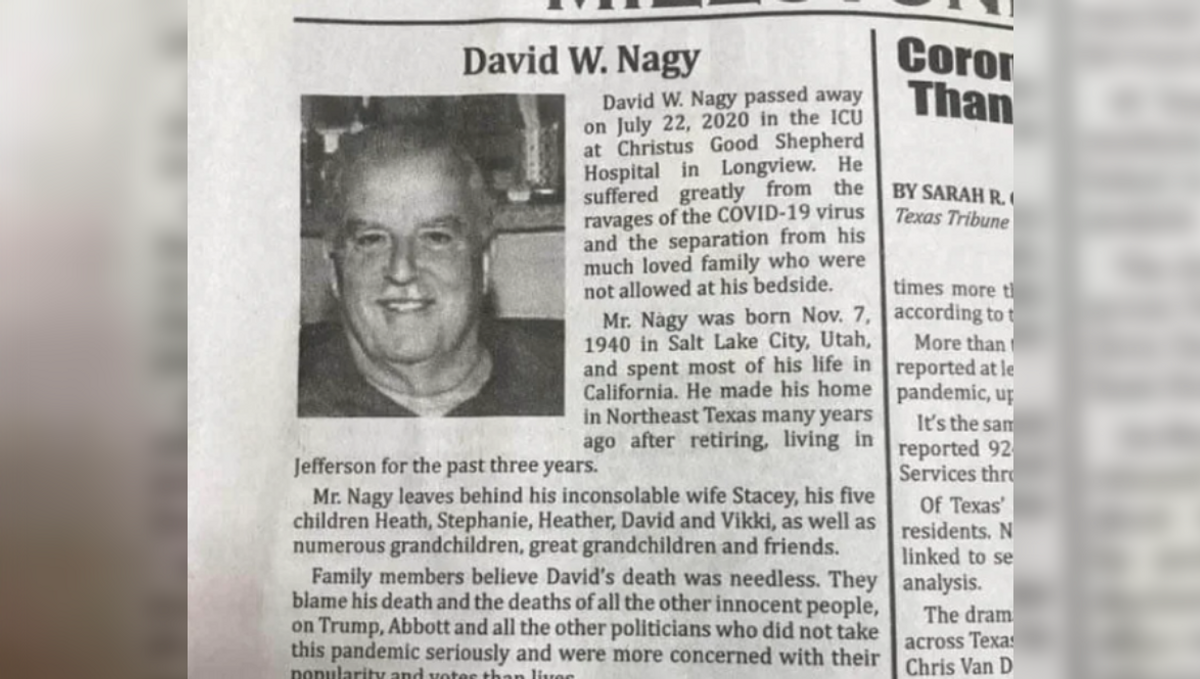 Claim:
The obituary for David W. Nagy blamed his death on U.S. President Trump, Texas Gov. Greg Abbott, and "other politicians who did not take this pandemic seriously."
Rating:

The obituary expresses not just grief over Nagy's death from COVID-19, but also anger, stating his death was needless and the result of negligence by others.

A social media user took a photograph of the obituary published in the Jefferson Jimplecute, a small newspaper covering Marion County, Texas, that doesn't appear to have a functioning website. The photograph went viral: Many who shared the image of the obituary did so with admiration for its raw emotion and forceful condemnation of not just political figures but members of the public who have failed to heed guidelines set out by public health officials. But some noted they were unable to independently locate it online and questioned whether it was authentic.

We contacted Stacey Nagy by phone and confirmed with her directly that she wrote the obituary. Nagy, who lives in Jefferson, Texas, said she was glad the obituary is being seen widely because she wanted her message to get out: notably, that others' failures to take precautions against COVID-19, like wearing face masks and social distancing, are causing people like her to experience hardship and grief.

Nagy said she has seen a lot people around her town failing to wear face masks, from drugstore employees to deputies at the Marion County Sheriff's Department, even though Marion County is now under Abbott's mask mandate.

"It gets me so angry that people are aren't taking this seriously," Nagy told us by phone. "The people who are dying are the older people especially — a lot of younger people are dying too — but it's almost like they're saying, 'Who cares about the older people?' I've been with my husband for 20 years and all of a sudden he's gone. People should know how this makes others feel."

She also expressed anger that the pandemic has been politicized. "It's not political," she said. "It's life and death."

Nagy said that her husband was ill and due to health complications he was placed in a convalescent hospital for what was supposed to be a temporary recuperation period. She believed he would be safe there because the staff was responsible. But sadly he was a victim of a COVID-19 outbreak at the facility.

The last time she saw her husband, Nagy said, was through a see-through barrier when he was in intensive care at Christus Good Shepherd Medical Center in Longview. He was unconscious, but she told him she loved him and to fight to stay alive so he could come home. Nagy said she told him that his children were flying in to see him. One day later, after three of his five his children visited him, David Nagy passed away.

"I miss my husband dearly," Nagy told us. "I'm taking one day at a time to just try to keep going. When I wrote that thing it was because of him. I don't want his death just to disappear. I wrote that and partially, it keeps him alive for me."