Are These Rumors About Daunte Wright's Criminal Record True?

Some Americans routinely draw attention to the criminal histories of Black men who die in police custody. 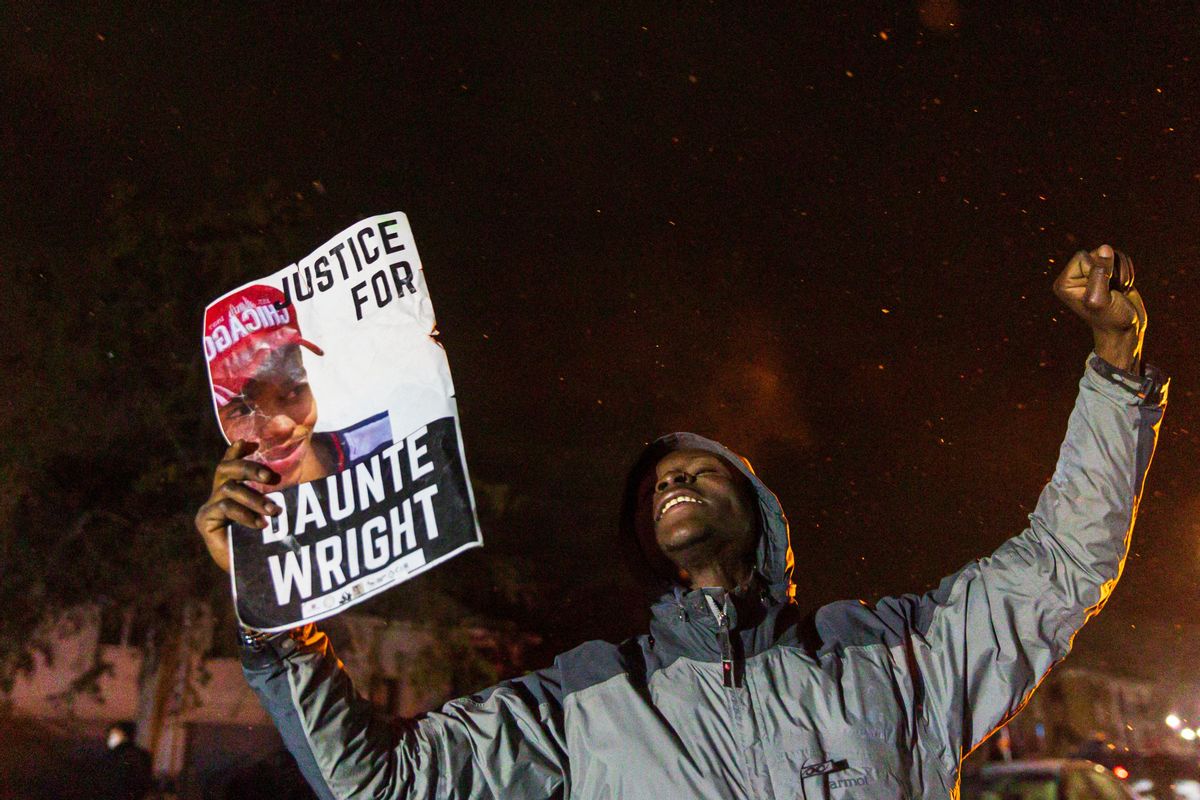 Claim:
When Brooklyn Center police fatally shot Daunte Wright on April 11, 2021, he was "on the run" from law enforcement for committing aggravated robbery.
Rating:

Wright was charged with aggravated robbery for an incident that occurred in December 2019, court documents showed. Additionally, there was a warrant for Wright's arrest when Brooklyn Police said they pulled him over for expired license plate tabs on April 11, 2021, and one officer fatally shot him. However ...

A judge issued that warrant for Wright's arrest weeks before his fatal encounter with police because he missed a court hearing for unrelated misdemeanor charges, not aggravated robbery.

No evidence showed Wright was "on the run" and attempting to evade law enforcement in the days, weeks, or months before his death.

When a white suburban Minneapolis police officer fatally shot a 20-year-old Black man named Daunte Wright in April 2021, corners of the internet circulated what they believed to be Wright's criminal record in what appeared to be an attempt to rationalize law-enforcement's actions.

Numerous Snopes readers asked us to determine the validity of such content, which spread rapidly thanks to the popularity of firebrand conservatives, including Fox News' Sean Hannity and talk radio host Charlie Kirk. The latter media mogul, for instance, posted an Instagram video in which he made the below-listed allegations as part of his overall argument that political opponents were purposefully omitting details about Wright's past arrests because they did not align with a pre-planned narrative focusing on racism by American cops.

To help readers sort facts from misleading information, what follows is an investigation into criminal allegations involving Wright — who is survived by family including a 2-year-old son — based on court records and police accounts. We focused our report on the below-listed accusations by Kirk and Hannity, specifically: In addition to those claims, other social media posts claimed Wright failed to appear at a court hearing -- spurring the warrant for his arrest -- because Minnesota's court system sent a letter outlining the hearing's date and time to the wrong address. Before we unpack those assertions, let us note here: Civil rights attorney Ben Crump, who represents Wright's family, did not respond to Snopes’ request for comment on the findings of this report. Also, as of this writing, Potter had ended her 26-year career with the Brooklyn Center Police Department with a one-paragraph resignation letter and faced second-degree manslaughter charges for killing the 20-year-old.

Claim: Wright Was Accused of Choking, Robbing Woman at Gunpoint

This was true. Using Minnesota's online database of court records, we obtained a probable-cause statement outlining law-enforcement's accusations against Wright, including allegations that he choked and threatened a woman with a handgun while robbing her.

According to that document, he and a high school friend went over to an apartment in Osseo (a neighboring suburb to the town where Wright died called Brooklyn Center), to party one night in December 2019. At the end of the hangout, around 2:30 a.m., the young men supposedly could not find a ride home, so two women who lived in the home allowed them to sleep on the floor.

The next morning, after one of the women left for work, her roommate told authorities that Wright blocked the apartment's exit, pulled out a handgun, and demanded that she hand over $820 in cash, the statement alleged. She supposedly had the money to pay rent. The document continued:

After an unknown amount of time passed, the female victim identified Wright and his friend as the alleged perpetrators by looking at photograph line-ups, according to the complaint. No further details, including Wright's relationship to the woman, were known.

Claim: Wright Was "On the Run" Before His Police Encounter

Yes, there was a warrant out for Wright's arrest at the time of his death. But that warrant was unrelated to the above-outlined case involving $820 in cash, debunking a fundamental aspect of Kirk's assertion.

"He was wanted for aggravated robbery back in February," Kirk claimed. "He's been on the run ever since."

In short, that claim was a mischaracterization of Wright's history with Minnesota's criminal justice system, and lacked evidence to prove he was intentionally evading law enforcement in the days, weeks, or months before Brooklyn Center police pulled him over.

Rather, on Dec. 4, 2019, authorities indeed filed paperwork to issue a warrant for his arrest for the alleged robbery in Osseo. But, about two days later, law enforcement fulfilled that warrant; they arrested Wright and his friend. Wright quickly posted bond, as outlined via the documentation displayed below, and agreed to follow the court's orders so he could leave jail. Then, the following summer, officers with the neighboring Minneapolis Police Department cited Wright for carrying a pistol without a permit and trying to evade their directions (both misdemeanor offenses), the records showed. Here's the probable-cause statement written by police outlining their case against Wright:

Because those alleged infractions violated the terms of his jail release mentioned above (and his probation officer said he stopped checking in, per the documents), Wright was detained again and released on bond in September 2020.

Then, just weeks before his death, Wright did not show up for his first court appearance on April 2 to discuss his alleged offenses in Minneapolis. It was unknown why Wright missed the court hearing.

In response to that absence, a judge issued another order for his arrest, and that was the active warrant (displayed below) when Brooklyn Center police ran his name through their background software moments before killing him. Claim: Wright's Arrest Warrant Was Due to Address Error

Not quite. As rumors about Wright's criminal history spread rapidly online, TikTok personality Walter Masterson posted a video in which he claimed: "Daunte Wright had a warrant out for his arrest because the notice for the Zoom hearing was sent to the wrong address."

This rumor was factually untrue, however, and Masterson deleted the video only after thousands of social media accounts shared it.

Based on our analysis of the court records, a letter notifying Wright of a court hearing via the video-chatting service Zoom indeed was returned to clerical staff in February 2021 -- possibly because it was mailed to the wrong location.

But that notice was unrelated to his alleged misdemeanors in Minneapolis and the outstanding warrant shortly before his death. Instead, the returned mail was part of the ongoing aggravated robbery case out of Osseo, the court records showed.

As we mentioned before, no evidence explained why Wright failed to appear in court on April 2 in the Minneapolis case, negating the possibility that a clerical error was the reason for his absence.

Claim: Wright Resisted Arrest Before He Was Fatally Shot

It was true that he and Brooklyn Center police officers struggled before Potter fired her handgun, according to Snopes analysis of the officers' body-worn cameras.

That footage began with two cops approaching each side of a white vehicle with Wright in the driver's seat, one of the cops attempting to handcuff the 20-year-old, and another police officer telling him he was being arrested on a warrant.

Then, Wright moved his body in a way that challenged officers' attempt to restrain him. During the scuffle, Potter is heard saying: “I’ll Tase you! I’ll Tase you! Taser! Taser! Taser!” while displaying her handgun and firing one shot. Then, the car traveled several blocks before striking another vehicle.

The medical examiner deemed his death a homicide and said he died from a gunshot wound in his chest.

The former Brooklyn Center police chief, Tim Gannon, said Potter mistakenly grabbed the firearm instead of a stun gun and called the shooting "an accidental discharge." (After making that claim, Gannon resigned from the police department, like Potter.) Some viewers, like conservative pundit Candace Owens, promoted that idea and framed Potter's actions as a "tragic mistake" unrelated to the victim's race. But Wright's family, attorney, and others pushed back on that conclusion, arguing an officer with Potter's experience should know the difference between a Taser and handgun and, if he were white, he would not be dead.

In the nights after Wright's death, crowds of protesters in the Minneapolis area rallied in support of that argument -- gatherings that resulted in chaotic clashes with police using tear gas and flash bangs.

Meanwhile, the posts attempting to call attention to Wright's past arrests primarily circulated among people of differing beliefs, a strategy all too familiar to scholars.

For example, after people similarly criticized George Floyd's criminal history after his death at the hands of police, Richard Reddick, an associate dean at the University of Texas at Austin, told Snopes the following:

By shifting discourse away from police brutality's disproportionate impact on Black Americans and onto the criminal background of the deceased, people can subscribe to the "he had it coming" trope and deny officers' responsibility for their actions.

"This is something that Black men are subject to quite a bit — not often seen as complex, whole human beings, who have done wonderful things and not so great things in their lives, but simply a criminal," Reddick said. "This is something that seems to be very specific to Black men who are ex-judiciously murdered; we have to find a rationale, or excuse, or justification for it, no matter what it was."