Darboy, Wisconsin, is the latest location where human traffickers are purportedly engaging in complicated schemes to snatch random Walmart shoppers. 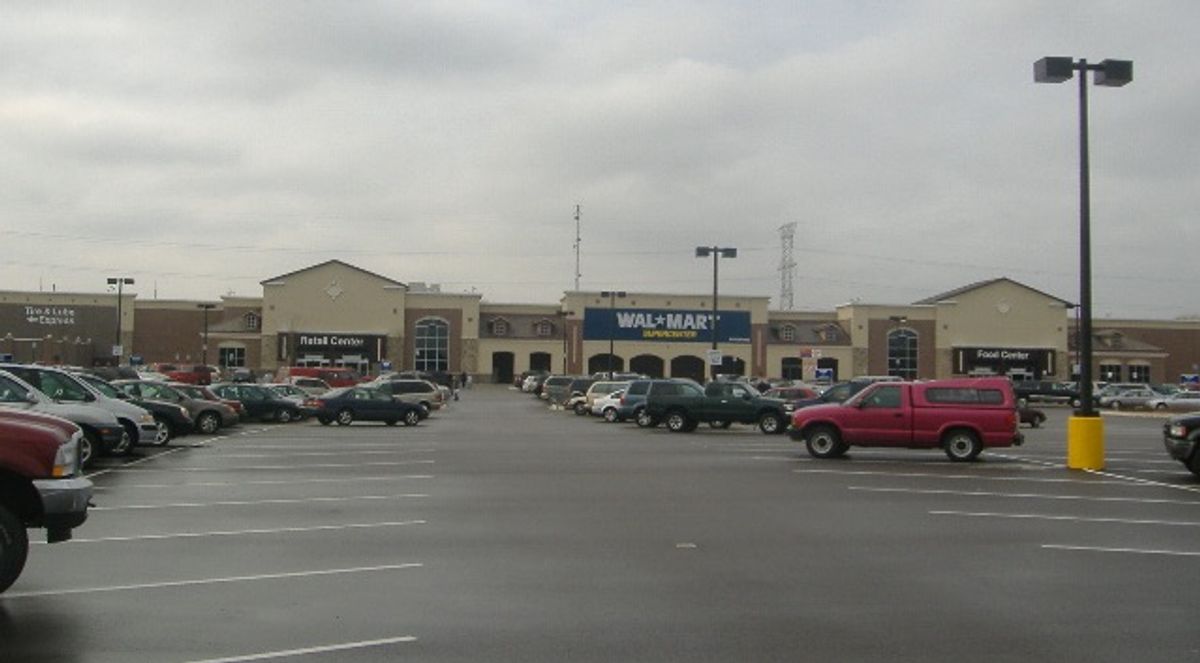 Claim:
A Darboy Walmart shopper encountered human traffickers using an unexpected menstrual period as a ruse, and a nearby police officer confirmed the interaction was a "new trick" used to abduct women.
Rating:

On 7 August 2016 Facebook user Megan Erickson published the following post to Facebook, reporting she narrowly avoided being abducted in the parking lot of a Walmart in Darboy, Wisconsin:

Attention women!! Husbands, fathers,and brothers too!! Tell this story to everyone you know!!! Today (08/07/16) while leaving walmart in Darboy,WI at about 4:45pm a woman in her 20s approached me and in an embarrassed hushed tone said i started my period and i should come to her car and get her sweatshirt to tie around my waist and i could just keep it. To most this sounds like an innocent, kind hearted gesture from one woman to another but what she didn't know is that i had a hysterectomy about 8 months ago...i can't have periods. A guy the next row over heard me telling her i was fine and that I'm going straight home and she started to argue with me about coming to her car and he came over and said hey how's it going long time no see and i played along for a moment thinking i possibly knew him from work and when i turned back to tell the woman that I'm not interested she was gone. The guy introduced himself as John Meldais(sp?) and said he's up from Milwaukee visiting his mom and he's a police officer. He explained to me that this trick is just one of many used to abduct unsuspecting women and he offered to stay with me while i contacted local police and gave my report. I'm grateful he was there today or who knows what might have happened! Ladies don't believe anyone you don't know! We see this on the news and feel awful for those involved but think it'll never happen to us. Don't be a victim!

Erickson maintained that a woman attempted to lure her to the stranger's vehicle under the auspices of sparing her (i.e., Erickson) further embarrassment due to the unexpected start of a menstrual period staining her clothes. However, Erickson said that she was surprised by the claim due to confirmed and permanent amenorrhea (i.e., absence of menstruation).

As an alleged scheme for luring human trafficking victims, the scenario presented here doesn't sound like a well-thought out one. Most women are roughly aware of when to expect their monthly cycles (or regularly use hormonal birth control, which regulates periods), and even if the bizarre proposal initially fooled a tiny pool of woman, those putative victims — already on the way back to their own cars — could simply hotfoot it home in their own vehicles and change clothes rather than visiting a stranger's car to take someone else's clothing

The claim was already treading a line of dubious plausibility when it went on to include the presence of a visiting police officer within earshot. As is common in viral Facebook kidnap warning posts, the "ambient police officer" character provides the narrative service of explaining what was otherwise a perplexing interaction. Erickson stated that the traveling cop warned her that the "trick is just one of many used to abduct unsuspecting women" and offered to wait with her while she contacted police but did not himself intervene. (Had the officer been out of earshot, the anecdote likely wouldn't have worked as a parable.)

Erickson asserted that she was not just passing on a story, claiming that the incident personally happened to her on 7 August 2016:

Erickson's account of a near-miss was one of dozens of pearl-clutching Facebook posts warning women about the convoluted means by which human trafficking scouts purportedly lure prey in popular in retail environments (and occasionally other public spaces). In June 2016 two similar stories of human traffickers circulated in Louisiana and Rochester, Minnesota about public parks, and a July 2016 viral warning about Kay Jewelers' rings-as-bait at a Wisconsin mall was one of the many circulating in perpetuity about human traffickers and big box stores' parking lots.

During the summer of 2015, countless "human trafficking warning" Facebook and social media posts went viral despite the fact such stories rarely (if ever) reflected realistic dangers: In May 2015, a woman warned of a later-debunked incident at an Oklahoma Hobby Lobby store; in June 2015, Twitter was overrun with tweets about sex slavery rings targeting college kids at summer job interviews; and later that same month a long-circulating theme park abduction urban legend popped up again. Those popular warnings bred a frightening (and fabricated) story about purported teenaged abductors (using heroin-filled syringes to drug victims) at a Denton, Texas, Dillards department store, a claim from a woman who maintained she narrowly avoided human traffickers using gift bags as bait in the parking lot of a Hickory, North Carolina, Walmart store, and subsequent rumors claimed Target stores in Tampa, Longview (Texas), and Houston were sex trafficking scouting hotbeds.

In all instances, the described interactions turned out to be misunderstood, vastly overstated, or entirely fabricated (such as a woman's claim about an unsettling encounter at a Michigan Kroger store) and were typically appended with lengthy treatises about how such narrow misses are every day occurrences that could happen to you. A common thread among the stories is a suggestion that abductors use gifts or promises of assistance to disarm female shoppers, as if such a ruse were necessary to abduct a person. The tales possibly served a greater purpose as talismans, providing readers with a belief that horrible tragedies were avoidable if they managed to resist gift bags, free rings, or other distracting objects. In the retellings, readers and spreaders of the rumors could feel they remained one step ahead of crafty criminals, well equipped to prevent themselves from becoming victims.

These warnings posit the unlikely scenario abductors will opt to risk approaching randomly-chosen women, conspicuously attempt a questionable engagement ploy, and risk capture or notice by law enforcement agents or store security. Age-old urban legends about robbers enticing victims with perfume samples persist and evolve in large part due to the entrenched belief that criminals can and do operate in this fashion; consequently, people are primed by years of exposure to the rumors to interpret any and all atypical parking lot encounters as affirmative of near-misses with abductors:

Similar (never substantiated) rumors about $100 bills placed under windshield wipers evidence the same lack of familiarity with the basics of such activity, describing a criminal plot that poses needless risk and a low return on investment for putative abductors or carjackers:

Our law enforcement contacts have also noted that although the process described above could be used by carjackers, they were unfamiliar with any cases of cars being taken in this manner, and the scheme outlined ran contrary to their experience of how carjackers operate. Specifically, they said that carjackings are generally crimes of opportunity, committed by persons in need of quick cash or youngsters either out for a thrill or participating in some rite of passage (such as a gang initiation). Carjackers tend to hang around places where motorists have to stop or exit their vehicles (e.g., intersections, gas stations, car washes, ATMs, freeway on- and off-ramps) and then force the drivers out of their automobiles (or simply take off with the temporarily unoccupied cars). Running around parking lots sticking flyers on windshields and then hanging around to wait for drivers to return to their vehicles involves planning and exposure atypical of most carjackers; they're more likely to approach occupied vehicles (particularly luxury cars with high resale value) and force the drivers out (by threatening them with weapons and/or physically pulling them out of their seats).

In summation, the Darboy Walmart warning isinconsistent with the known patterns associated with human traffickers (described at length in the United Nations Office on Drugs and Crime FAQ about human trafficking). The rumor is yet another variation on an urban legend that has circulated for at least two decades, a period during which we've never located any substantiated instances of such an abduction occurring.

We contacted the Appleton City Police Department near the Darboy Walmart to ask about the rumor and spoke with a public information officer there. That officer said the department was aware of and investigating the claim, confirming that no calls or reports were made from the Darboy Walmart on 7 August 2016.

Law enforcement sources repeatedly explain to us in response to these types of rumors that human traffickers typically recruit victims by attempting to establish relationships (and even a degree of trust) with them; abducting random victims from store parking lots via a convoluted and risky gambit doesn't fit any known pattern of that crime. And again, the presumptive goal of securing targets outside their vehicles could be accomplished much more efficiently by simply intercepting passersby parked in desolate areas of a parking lot with no premise for interaction required.

On 8 August 2016, the Appleton Police Department issued a statement via Facebook confirming that the story was "fabricated":

There is a good likelihood you may have seen a post on social media regarding a suspicious incident at a large box store on E. Calumet Street in Appleton. The incident reportedly occurred on Sunday afternoon.

Although the person posting the information claimed the incident had been reported to the police, we didn't have any record of a call for service in the area. We assigned an officer to follow-up on the information.

Based on our investigation, we have found the incident was fabricated. The person posting did not realize the power of social media. While they hoped to send of message of vigilance and paying attention to your surroundings, they inadvertently caused people to be fearful of a specific area. They also did not realize their post would be shared thousands of times.

While we want people to be vigilant, we do not want them to be scared. Know there are people who will take advantage of you and be prepared on how you will deal with those situations, if they arise.

Lastly, don't blindly share information. Because it appears on the internet, it isn't necessarily true. We appreciate the many people who called and sent us messages inquiring about the story. We also appreciate your patience while we investigated the information.

Be smart. Be safe.