Was a Volkswagen Beetle and Its Passengers Crushed Between Two Trucks? 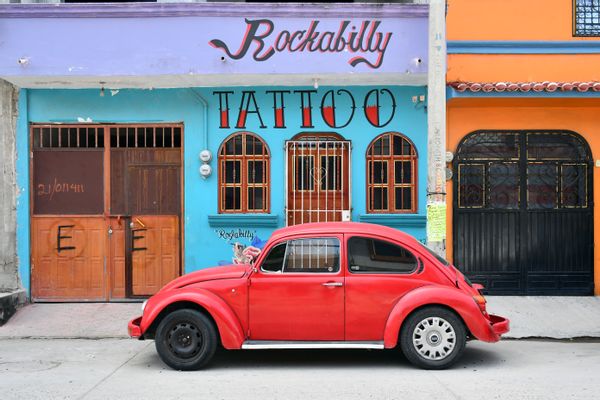 Claim:
Two large trucks that had collided head-on are pulled apart weeks later, revealing that a Volkswagen Beetle and its occupants had been crushed between them.
Rating:

We collected this story from the internet in 1997:

Two of those big huge 18-wheelers were involved in a collision at very high speeds; one tail-ended the other one really really hard, so hard that the two trucks were basically fused together. The proper authorities dragged the trucks (still connected) to wherever it is they take them, I guess a junkyard, and then just left them there until someone could figure out what to do with them. After a few days, a stench started to emanate from the wreckage, and no one knew what it was. It got worse each day. When they finally pulled the two trucks apart, they found that a VW Bug, its passengers still inside, had gotten smashed between the trucks during the accident.

A ritual familiar to high school students in California and other states is the taking of Driver's Education (or "Driver's Ed" for short): A classroom-based course intended to prepare teenagers for the tasks of undertaking on-the-road driving lessons, acquiring their driver's licenses, and becoming safe and responsible motorists. Such courses have typically included a mixture of instruction in traffic laws and regulations, training with driving simulators, and the viewing of "safety" films such as Mechanized Death, Wheels of Tragedy, and Red Asphalt, the last of them described by the Los Angeles Times as follows:

"Red Asphalt" — the title says it all — is the flip side of California's carefree car culture. Intended to scare the bejabbers out of fresh-faced and obliviously immortal teen drivers, the original film and its four remakes are horror shows of vehicular ultraviolence mostly filmed by camera-ready cops called to accident scenes along the state's roads. The gruesome road-splatter films have become sociological touchstones for many drivers, and even may be among the most-viewed movie titles ever to come out of California.

The "crushed Beetle" example quoted above is akin to an oral Red Asphalt tableau, with true horror apparent only in retrospect: Two 18-wheelers that collided head-on have become fused together as a result and are removed from the accident scene in that state; not until they are pulled apart at a wreckage yard days (or weeks) later does someone discover that a Volkswagen Beetle — with its dead driver and occupants still inside — had been crushed between them. In one sense, this legend might be read as merely a general warning on the potential dangers associated with driving, with the inclusion of the largest and smallest vehicles then commonly found on roadways (i.e., tractor-trailers and a VW Beetle) used to heighten the horrific effect and make the plot device of delayed discovery plausible. On the other hand, this legend might be interpreted as a commentary on our industrial society: You, dear individual commuter, in your small, cheap vehicle, are of little importance compared to the big rigs that transport the raw materials and finished goods which keep our economy running; you're just collateral damage that we have to clean up if and when we get around to finding you.

In December 2008, a confluence of traffic accidents on an Ohio roadway led to an incident reminiscent of this legend:

A man who was killed in a car crash was left dead in the crumpled vehicle when it was towed away, and the body was not discovered until family members found it two days later.

Emil Azzam died instantly from head and neck injuries when his car crashed on a snowy roadway. The car was not far from a multivehicle accident, and witnesses had described Azzam's car as an abandoned vehicle.

Dennis Allen, co-owner of Parma Towing, said the company was asked to perform an emergency tow so the road could be cleared. He wouldn't say if the driver looked in the car before it was towed.

Azzam's family filed a missing person's report, traced his vehicle to the impounded car lot and found the body. He was still holding a burned-out cigarette in his hand, his family said.