According to the rumor, Queen Elizabeth II was photographed with a group of soldiers, including one man who probably should have adjusted his kilt. 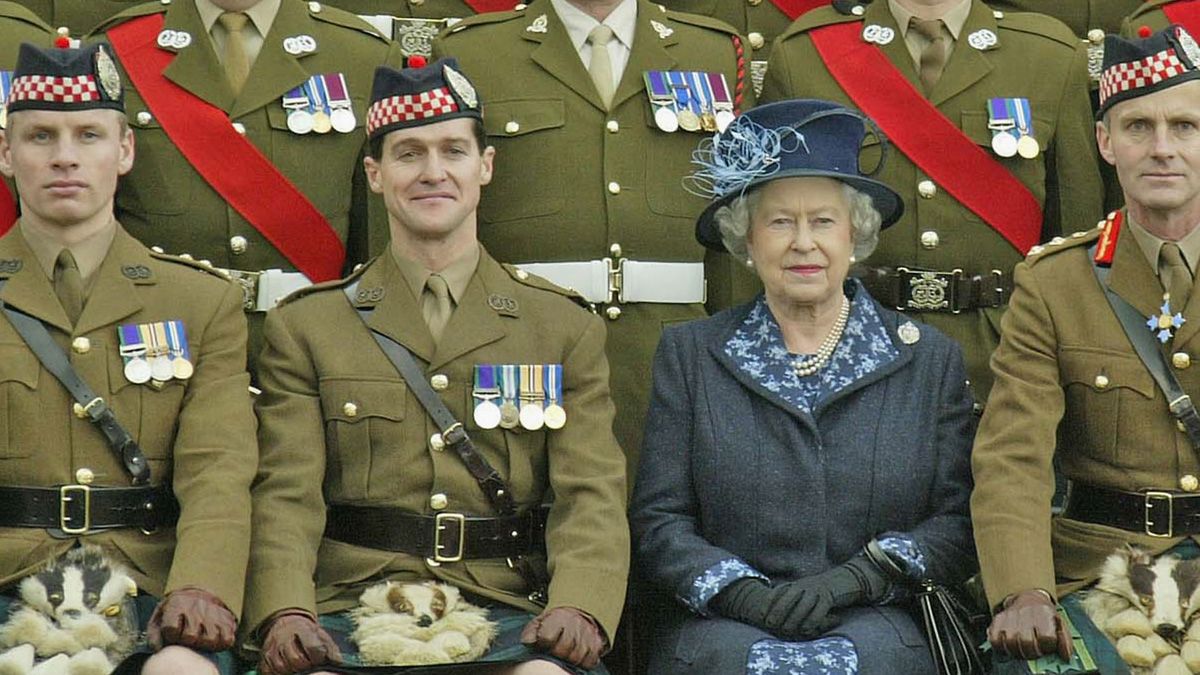 Claim:
A photograph shows Queen Elizabeth II seated next to a colonel whose kilt was a little too revealing.
Rating:

It's true that, in 2004, Col. Simon West's kilt was raised a bit higher than possibly intended for a photograph with the queen.

However, the version of the picture shared online that appeared to show West's genitals was the result of digital editing software.

In November 2004, Queen Elizabeth II paid a visit to the 1st Battalion of the Argyll and Sutherland Highlanders at Howe Barracks in Canterbury, Kent, to present medals to the unit for their recent tour of duty in Iraq. According to a picture that was shared online, as Her Majesty posed for a standard photograph with the honored soldiers, one of the men named Col. Simon West appeared to have not arranged his kilt quite carefully enough: Colonel Simon West didn't appear to be taking the occasion too seriously yesterday.

In his cap, jacket and spats, his hands on his knees and his ankles crossed, he sat proudly in the front row of the 1st Battalion of the Argyll and Sutherland Highlanders, next to the Queen.

But unlike his comrades, he hadn't taken the time to adjust his sporran and kilt for decency. So the kilt flapped about for all the world to see. And judging by the grin on his face, the colonel knew exactly what he was doing.

Onlookers said the Queen didn't notice what was happening next to her. But she does not exactly appear comfortable in the photograph.

The photograph that accompanied the Daily Mail article is seen below. It wasn't quite as revealing as the one shown above: This was the version of the image that was published by the Daily Mail.

It was initially unclear if the Daily Mail's version of the picture was edited by its staff for decency's sake, or if someone took the original photograph and digitally added some extra naughty bits.

The Mirror‘s report on this photo, which showed the headline, "My Privates Can't Control Themselves," suggested the latter, that Colonel West did indeed pose sans underpants, but the shadowing of the photo obscured anything more he might have revealed:

Simon West, 39, was "embarrassed beyond comprehension" and denied that the cheeky grin on his face proved he knew exactly what he was doing.

One of his soldiers said: "We all think it's hilarious. The newspapers are selling like hot cakes."

One thing was brought out into the open yesterday — the colonel definitely had not got anything on under his kilt.

He added: "The accusation he did this on purpose is utterly ridiculous."

As for the jaunty grin, apparently that is how he always smiles.

A colleague at the base said: "When he saw the picture he went bright red. He was covered in confusion. It was an extremely formal occasion.

"I am sure he'll see the funny side one day but at the moment he's not laughing. He's the boss and he knows everyone will be having a jolly good laugh."

At the time, The Mirror was unable to clear up the age-old mystery of just what one might expect to find under a kilt:

His father William West, a retired major in the Gordon Highlanders, said: "We are bound by the Official Secrets Act so we can't say what's under the kilt. But my son nearly let the cat out of the bag. Luckily there was a shadow there. It's all terribly embarrassing. My daughter-in-law phoned. She said he was rather out of sorts."

While updating this story following the queen's death in September 2022, we noticed that Getty Images had published three different high resolution photographs from the moment with the colonel's raised kilt, including this one: This is the original version of the photograph from Getty Images. (Photo by ROTA/Getty Images)

The colonel's genitals did not, in fact, appear to be visible while seated next to the queen. At the same time, his kilt was raised, allowing a view underneath the clothing that perhaps wasn't part of his plan that day.

Williams, Alexandra. “MY PRIVATES CAN’T CONTROL THEMSELVES; Colonel Dives for Cover after His Royal Flash.” Free Online Library via The Mirror, 11 Nov. 2004, https://www.thefreelibrary.com/.

On Sept. 9, 2022, this article was reformatted following the queen's death. We also added information from Getty Images that confirmed one version of the picture had been doctored.