Claims from 2014 holding that Cook County voting machines were rigged to change Republican votes to Democratic votes were based on a single miscalibrated machine. 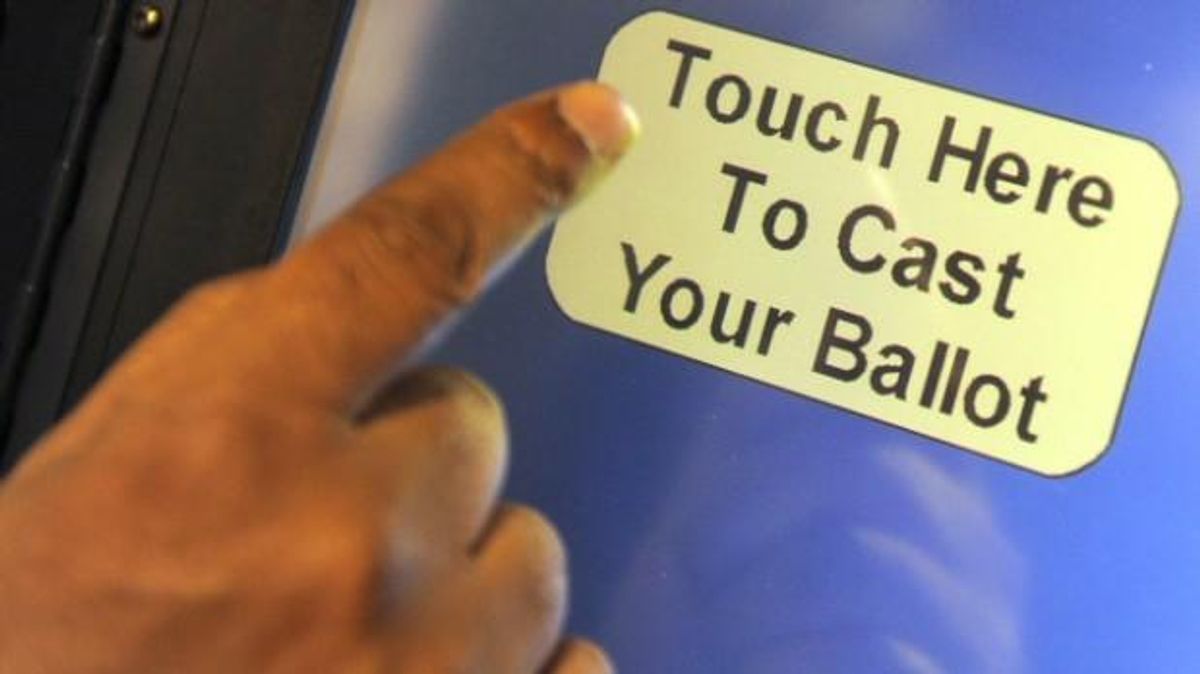 Claim:
Voting machines in Cook County were rigged in 2014 to change votes cast for Republican candidates to votes for Democratic candidates.
Rating:

On 22 October 2014, a conservative blog in Illinois published Republican state representative candidate Jim Moynihan's account of an early voting glitch. According to Moynihan, his attempt to cast votes for himself and other Republican candidates on 20 October 2014 in Cook County, Illinois, resulted in a votes being recorded for Democratic opponents instead:

"While early voting at the Schaumburg Public Library today, I tried to cast a vote for myself and instead it cast the vote for my opponent," said Moynihan. "You could imagine my surprise as the same thing happened with a number of races when I tried to vote for a Republican and the machine registered a vote for a Democrat."

While using a touch screen voting machine in Schaumburg, Moynihan voted for several races on the ballot, only to find that whenever he voted for a Republican candidate, the machine registered the vote for a Democrat in the same race. He notified the election judge at his polling place and demonstrated that it continued to cast a vote for the opposing candidate's party. Moynihan was eventually allowed to vote for Republican candidates, including his own race.

Moynihan also tweeted about his polling place experience on 20 October 2014:

Be careful when you vote in Illinois. Make sure you take the time to check your votes before submitting your... https://t.co/mOD8uxvsDl

At the time, Moynihan expressed concern that fellow voters would also encounter the same issue at the polls:

Clearly, I am concerned that citizens will be unable to vote for the candidate of their choice, especially if they are in a hurry and do not double check their ballot. I cannot say whether or not this was intentional, but Cook County voters deserve better and should not have their right to vote suppressed.

On 20 October 2014, Moynihan's issue was reported locally alongside another early voting issue from Arlington Heights, in which local news sources reported an error that "involved the wrong signatures popping up for voters who came in to cast ballots." The Cook County clerk's office immediately addressed both issues, and it was determined that the machine on which Moynihan had attempted to cast his ballot had been improperly calibrated:

Both issues were addressed as soon as election judges were made aware of them, and they did not interfere with voters being able to cast ballots in the way they chose, said Jim Scalzitti, deputy communications director for the Cook County clerk's office.

Representatives of the Cook County state's attorney's office said they received no reports or requests to look into polling place irregularities.

When he pointed it out to a judge, it was determined that the machine hadn't been calibrated correctly, he said. He ultimately was able to vote for the candidates he chose by pressing the very bottom right hand corner of the screen. Pressing the center of each button resulted in the opposite candidate's name registering.

Scalzitti said the machine in question was removed from service to be recalibrated immediately and that there were no other reports of voters having similar problems.

Moynihan's issue occurred on the first day of early voting in Cook County, and officials said a tiny fraction of voters were affected by the glitch:

Moynihan alerted an election judge and was allowed to cast a correct ballot on the first day of early voting in Illinois.

"He did what he is supposed to do by contacting the election judge," said Cook County Clerk spokeswoman Courtney Greve.

The machine was taken out of service and Moynihan's initial Democratic votes were never registered.

The issue is hardly widespread, with only 5 out 35,000 voters in suburban Cook County so far experiencing any issue, Greve said.

After the election concluded, Cook County Clerk's office Deputy Communications Director James Scalzitti explained how difficult it would have been for any voter to fully cast an unintended vote (even on a machine that may have been miscalibrated) and maintained that all reported instances of voter problems had been immediately addressed and corrected:

Nearly 700,000 votes were cast in suburban Cook County for the Nov. 4 Gubernatorial Election. As far as we know, maybe a couple handfuls of voters encountered an issue with the calibration on their touchscreens. The important thing to keep in mind though is that NO votes were "CAST" for any candidate that the voters did not want to vote for.

The touchscreen that voters use is much like the touchscreen on your smartphone or the screen on an ATM. Sometimes you'll touch a letter or box and the machine will think you pressed the one next to, or above or beneath it. On the voting touchscreen, you are given at least two opportunities — once while you are on that particular screen, and again when you get to the final screen — to review your choices and change them if you wish.

In these incidents during this election, whenever a voter encountered this problem, they alerted an election judge, who had the voter vote on another machine, and the machine they were using was re-calibrated. No votes were recorded or cast until the voter tapped on the final box on the final screen that asks if they want to cast that ballot.

Also, every voter had the option of using a paper ballot if they did not want to use the touchscreen.

Scalzitti also said that Moynihan's heavily circulated created false impressions that voting "glitches" were widespread and that a miscalibration issue favored one party over another:

This got a lot of attention because one of these incidents happened during early voting [and involved] a candidate for state rep., who then blogged, Facebooked, Tweeted about it, in addition to contacting many media outlets — the story took on a life of its own on Right Wing media sites, resulting in loads of nasty messages and emails and tweets sent my way by people who were convinced this was proof of Democrat vote fraud and that the clerk's office was behind it somehow. No additional voting glitches have been reported in Cook County since the improperly calibrated machine was taken out of service.

On 22 October 2016, the 2014 Cook County calibration error claim was recirculated on Facebook as a purportedly contemporaneous account.