Is This Picture from a Covington Catholic High School Basketball Game?

Covington Catholic’s students have a history of donning black body paint during their “black out” basketball games. 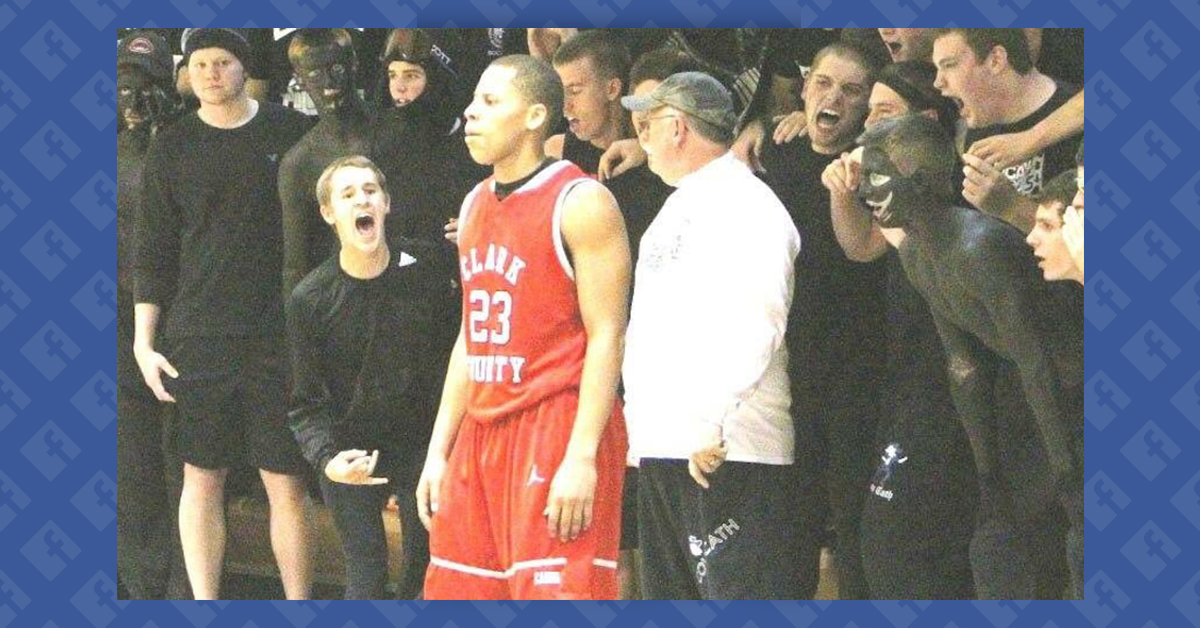 In the aftermath of a controversy over a viral video that appeared to show students from Covington Catholic High School in Kentucky mocking a Native American elder while wearing “Make America Great Again” hats, that school came under significant public and news media scrutiny.

In that context, a photograph of some of the school's students covered in what looked to be black body paint yelling at a black player during a basketball game also went viral: At least three reasons suggested this photograph was an authentic image. First, the official YouTube page of Covington Catholic posted a (now deleted) video on 24 January 2018 titled “Colonel Crazies Compilation Video” — a reference to the nickname given to that school’s cheering section — which showed numerous students covered in black paint present at several basketball games. One clip could possibly be from the same game shown in the photograph, based on the distribution of painted players and the year (2012) the video was allegedly taken:

Second, the photograph appeared to originate with a message board for Kentucky prep schools titled BluegrassPreps.com where it was posted on 7 December 2015, well before the controversy over the January 2019 viral video. The photograph was posted as part of a discussion on whether or not “The Colonel Crazies' treatment of inbounders” — players making an inbound passes — should change, and the thread included posts from several individuals defending both the antics and the wearing of black paint as well.

Based on comments in the BluegrassPreps message board, the intent of the black body paint was not racial but was instead a school tradition related to “black out” games, during which fans wore black to support the team. That being said, at least one person in the thread posited a connection to racist minstrel shows from the 19th century that used blackface on white actors to depict African Americans unfavorably. “That guy on the right looks like he might have been researching minstrelsy before the game,” one post read.

We reached out to the director of athletics at Covington Catholic via email to get more clarity on their cheering practices and will update our post if we receive a response. Regardless of intent, however, the photograph is an authentic depiction of a Covington Catholic basketball game that we infer took place on 27 November 2012.

BluegrassPreps.com.   "Should the Colonel Crazies' Treatment of Inbounders Have to Change?”     Accessed 21 January 2019.