According to the story, the police officer who was refused service decided to return to the restaurant the next day while in uniform. 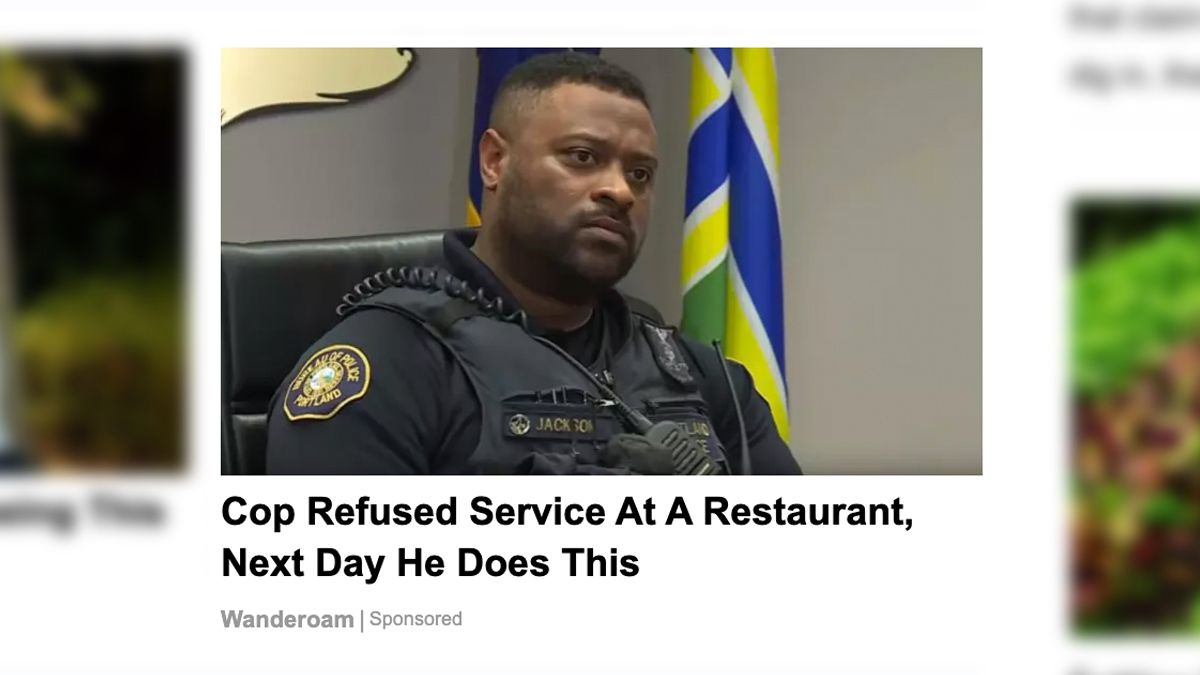 Police officer and chief Karl Baker was purportedly refused service at a diner and the online ad read as follows Cop Refused Service At A Restaurant Next Day He Does This. (Image Via Richouses)

Claim:
A Black police officer named Karl Baker was refused service on his day off at a diner in Alexandria, Virginia, so he returned the next day in uniform.
Rating:

In November 2021, an online advertisement claimed: "Cop Refused Service at a Restaurant, Next Day He Does This." The ad led to a 59-page slideshow article on the Wanderoam website. It told a story about a Black police officer named Karl Baker in Alexandria, Virginia, and had the headline: "Waitress Refuses To Serve Customer Is Shocked At What Comes Next." An unknown person was paying for this "cop refused service at a restaurant" ad to be displayed on the Taboola advertising network.

According to the tale, Baker, who was also mentioned as being a police chief, decided to spend part of his day off at a diner. However, he was refused service by a female cook. It ended by mentioning that Baker returned the next day in uniform, where he got the last laugh.

However, there's no truth to this story. We found no reporting from any credible news sources about an Alexandria police officer named Karl Baker being refused service at a diner. It was made-up.

According to an article from The Sun, the picture in the misleading ad showed Jakhary Jackson, a police officer in Portland, Oregon. Further, all of the photographs in the lengthy Wanderoam article were taken from unrelated sources.

We found variations of the same "cop refused service at a restaurant" tale on other websites. Top5.com published: "Diner Refuses To Serve Man Food, He Shows Up In Uniform Next Day." Cleverst.com posted: "Rude Employee Got What She Deserved After Doing This To The Older Man." ArticlesVally.com chose the headline: "Waitress Refused To Take His Order, They Were In Shock When He Came Back The Next Day." The original draft of the story appeared to come from PenguinMD. The same fictional tale from Top5.com.

Several of the pictures displayed in the lengthy articles showed signage for Noodles & Company, a restaurant chain based in the U.S. It's true that in 2016, employees at Noodles & Company were fired for refusing to serve a police officer in Alexandria, Virginia, as the Seattle Times and Associated Press reported. However, Noodles & Company is not a diner. Also, the reporting specified that it was a female officer who was refused service, not someone with the name Karl Baker. Further, nothing was mentioned about the officer returning the next day to confront the employees in uniform. According to the report, she was already in uniform when the initial incident occurred.

For more fact checks about police officers and members of the military purportedly being mistreated in public, see our Shunned Serviceman stories.

“Cop Says 'Violent’ Mobs of Protesters Have ‘Less Minorities’ Than Police.” The US Sun, 17 July 2020, https://www.the-sun.com/news/1155770/cop-hypocritical-violent-blm-protesters-minorities-police-clash/.
Foster, Fred. “Man Was Refused Food in Diner, He Came Back in Uniform to See How They Would React.” PenguinMD, 1 Aug. 2021, https://www.penguinmd.com/view/diner-refuses-serving/.
“Restaurant Employees Fired for Refusing to Serve Officer.” The Seattle Times, 29 July 2016, https://www.seattletimes.com/nation-world/restaurant-employees-fired-for-refusing-to-serve-officer/.