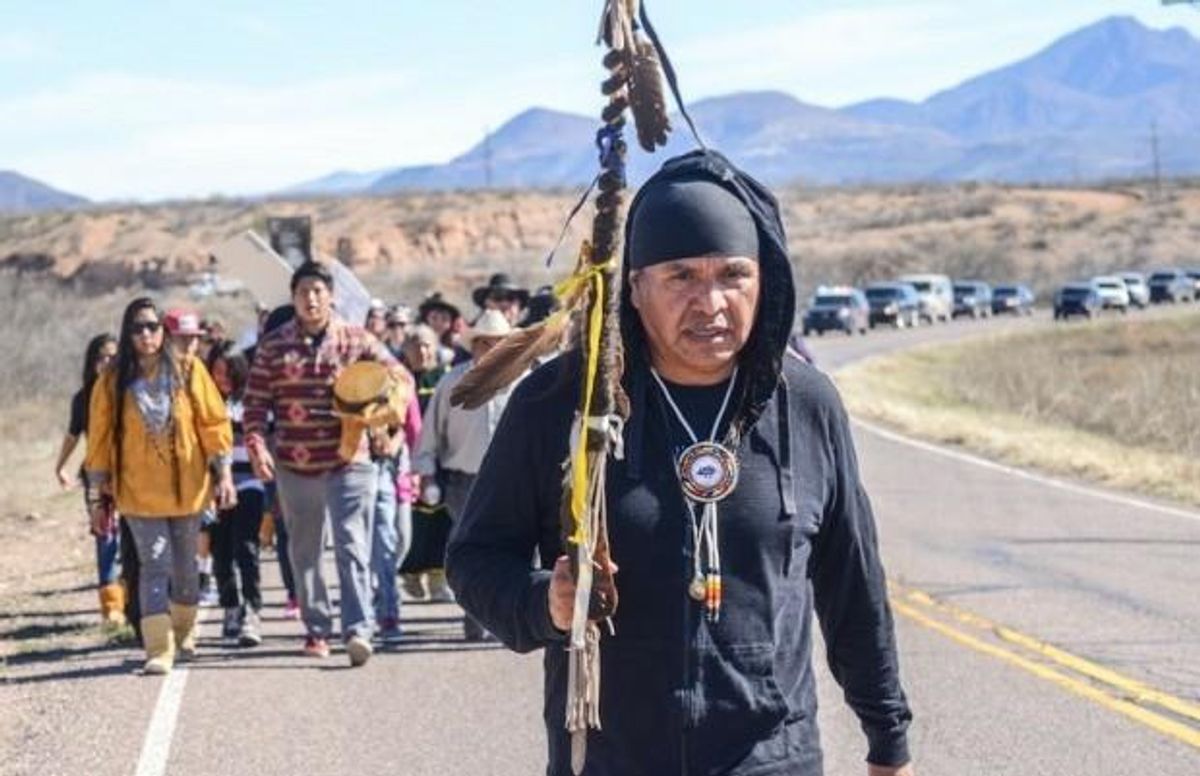 On 9 December 2014, social media users began circulating an article titled "House Votes to Sell Apache Land to Foreign Corporation, The Tribe Is Furious" regarding a trade of federally managed land in Arizona (of cultural significance to the Apache) that had been appended to an unrelated and more urgent bill involving the National Defense Authorization Act (NDAA):

For over 5 years, a measure to cede 2,400 acres sacred to the Apache tribe for use in copper mining has been pushed in Congress. Backed by various well-paid corporatist congress members such as Senator John McCain, this measure inevitably dies from the outrage of the native tribes who care for this land. So, this year the members backed by legalized bribes by foreign corporations have attached the measure to the must-pass National Defense Authorization Act in a lame duck session of congress.

The attempt to hide this brazen attempt to sell off cultural heritage for mere coin tells us how these congress members feel about their duty to protect this nation. One must wonder how much of the estimated $61 billion in revenue is to be lining these congress members pockets if the bill passes intact. After all, members of congress regularly reap huge profits from bills they introduce.

A more detailed explanation of the controversial measure observed that:

The House approved a bill on December 4 that gives 2,400 acres of sacred Apache land to a giant international mining corporation, then sent it to the Senate for a fast vote in a process that won't allow amendments to be made. The Senate is expected to act on it this week.

The land swap bill, called the Southeast Arizona Land Exchange and Conservation Act of 2013 (H.R. 687), was attached as a rider to the annual must-pass National Defense Authorization Act (NDAA) along with several other land-related bills.

Much of the claim was correct at the time it was written: a long-standing effort to pass the Southeast Arizona Land Exchange and Conservation Act came to issue on 2 December 2014, when the measure was attached by members of the House of Representatives to a vote on funding for the must-pass National Defense Authorization Act (NDAA). The NDAA is a United States federal law specifying the budget and expenditures of the United States Department of Defense, and as there was no substantive link between the two measures, their attachment amplified criticism that adding the land swap rider to the NDAA unreasonably suppressed opposition to the former.

Native Americans and conservation groups opposed the legislative transfer of land to Resolution Copper Mining, citing both environmental and cultural concerns. Critics of the measure believed the proposed mode of transfer was heavy-handed and unwarranted:

Pushing a land-swap through Congress is not the only option for the mining company to acquire the land, opponents say.

"Rio Tinto has yet to articulate any credible reason why a congressional land exchange is needed, versus the normal administrative processes," states the 2013 letter from the Inter-Tribal Council of Arizona to Congress.

"We don't think we should be privatizing public land, especially land that's part of a national forest," and land that's important to indigenous groups, said Athan Manuel, director of the lands protection program for the Sierra Club in Washington.

While the land in question in Arizona is culturally significant to Native American groups such as the Apache, it was not tribal land that belonged to them prior to the Southeast Arizona Land Exchange and Conservation Act. The proposal also didn't mandate that the land be "given" to a mining company; rather, it would be traded for several other parcels (which although cumulatively larger in size than the property given up did not include land culturally important to local tribal groups). Nevertheless, use of the areas adjacent to the proposed mining site would likely be disrupted or devalued.

Secretary of the Interior Sally Jewell expressed her disapproval of language in the NDAA that provided for the exchange of a 2,422 acre parcel of U.S. Forest Service land to Resolution Copper Mining, LLC for a number of parcels in Arizona to be managed by the USFS and the Bureau of Land Management by stating:

The Oak Flat area, or Chi'Chil'Ba'Goteel, has significant religious, cultural, historical, and archeological value to the San Carlos Apache Tribe and other tribes in the region.

I am profoundly disappointed with the Resolution Copper provision, which has no regard for lands considered sacred by nearby Indian tribes. The provision short circuits the long-standing and fundamental practice of pursuing meaningful government-to-government consultation with the 566 federally recognized tribes with whom we have a unique legal and trust responsibility.

Although there are consultation requirements in the legislation, the appropriate time for honoring our government-to-government relationship with tribes is before legislating issues of this magnitude. The tribe's sacred land has now been placed in great jeopardy.

I look forward to working with Rio Tinto to better understand their plans for development and to see what additional measures they can take to work with the tribes, including forgoing development in these sacred areas.

On 5 November 2015, Vermont senator (and Democratic presidential candidate) Bernie Sanders introduced the Save Oak Flat Act (S. 2422), a bill seeking to "repeal the authorization and requirement for a land exchange between the Department of Agriculture and Resolution Copper Mining, LLC." No action has yet been taken on that bill.

Efforts have since been made to include the Oak Flat area in the National Register of Historic Places, but Republican Rep. Paul Gosar and Democratic Rep. Ann Kirkpatrick, both of Arizona, have opposed that move and have asserted that such a designation would not necessarily preclude mining activity on the land:

[T]wo U.S. House members from Arizona sent a letter to the National Park Service asking that the property in Pinal County be withdrawn from consideration for the National Register of Historic Places.

A Jan. 21 [2016] notice in the Federal Register lists the site for the proposed designation as Chi'chil Bildagoteel Historic District, Superior.

In their letter, the two lawmakers ask for an additional 60 days for people to comment on the proposal.

The 50-page application form for the National Register of Historic Places was filled out by the officials of Tonto National Forest who consulted with members of the San Carlos Apache Tribe.

Steve Smith, a spokesman for Gosar, said it is not clear what impact the historic designation would have on the mine.

The website for the National Register of Historic Places states the listing "places no obligations on private property owners" and imposes "no restrictions on the use" of private property.

Rep. Gosar also maintained in a press release that the land in question has "never been a sacred site":

Oak Flat is currently on Forest Service land and is slated to be transferred to a private mining company as part of the bipartisan Southeast Arizona Land Exchange and Conservation Act signed into public law in December 2014. Environmental groups, a D.C. lobbyist from the Clinton Administration and other mining opponents encouraged the Forest Service and National Park Service to list the Oak Flat Campground as a historical site in a deceitful attempt to quietly undermine the copper project.

Shame on the Park Service and Forest Service for ramming a bogus historic place listing down the throats of Arizonans. Clearly, the Obama Administration cares more about pandering to extremist environmental groups and a D.C. lobbyist from the Clinton Administration than following the law and listening to the American public. Oak Flat has never been a sacred site, as confirmed by the local tribe's own former historian. Yet, Obama's minions are hell-bent on sabotaging an important mining effort by listing a small, public campground 20 miles away from the nearest tribe's reservation as a historic site.

The agency's attempt to silence public comments through deceptive notices and short comment periods is outrageous and inexcusable. Neighboring tribal members who have seen unemployment numbers as high as 70%, a Superior community in dire need of good-paying jobs and Americans throughout the country all need this important mining project. A bipartisan Congress and the president have declared the land exchange for this copper mine to be the law of the land. That should have been the end of it. But blatantly deceitful collaboration that ignores the Rule of Law cannot be tolerated. This fraudulent action is the latest in a long list of egregious bureaucratic abuses of power by the Obama Administration. I will continue to fight this overreach.