Was the Confederate Flag Raised at the U.S. Capitol in Washington, D.C.?

As a pro-Trump mob stormed the government building, the flag was visible in different places. 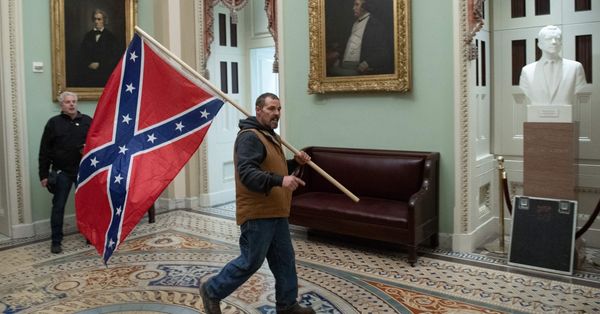 Claim:
A Confederate flag was spotted inside and outside the U.S. Capitol as a pro-Trump mob stormed the building.
Rating:

Violence grew on Jan. 6, 2021, as a pro-Trump mob stormed the heart of the government, the U.S. Capitol, in opposition to the results of the November 2020 presidential election. The attack came after a “Stop the Steal” speech from U.S. President Donald Trump on the National Mall earlier in the day, where he again refused to accept his election loss.

Given that there is video and photographic evidence from multiple reporters on the ground in the Capitol, we rate this claim as “True.”