A teenager did not die while filming a "condom challenge" video. 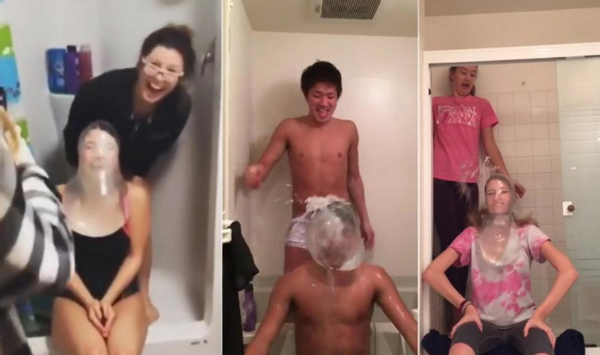 
I was trying to find out if anyone had died from the new challenge where teens drop a condom full of water on another persons head. It looks dangerous to me but I don't think this story is real.

[green-label]Origins:[/green-label] The "condom challenge," a video challenge that involves dropping a condom filled with water onto somebody's head, started going viral in November 2015:

As "condom challenge" videos grew in popularity, rumors started to spread that a teenager had died while performing the viral stunt:


A 17-year-old teen was reportedly killed performing yet another stupid internet stunt, this one involving condoms filled with water. The “condom challenge,” designed, apparently, to prove that no guy is actually “too big” to wear a condom, involved filling a condom with an excessive amount of water, and then dropping it onto a participant’s head. “Jessica Moore and her friend, Theresa Jones, were reportedly filming themselves performing the ‘condom challenge,’ and Jessica was killed in the processes, drowning when the condom filled with liquid got stuck around her head,” said police chief Larry Whittum. “This is a stupid and dangerous challenge that has no real merit. Everyone knows that condoms can fit any size penis, and filling a rubber with water and dropping it on someone’s head is not going to bring awareness to anything.”

The above-quoted article was published by the fake news web site Empire News on 23 November 2015. According to a disclaimer on the web site, Empire News is for "entertainment purposes only."


Empire News is intended for entertainment purposes only. Our website and social media content uses only fictional names, except in cases of public figure and celebrity parody or satirization. Any other use of real names is accidental and coincidental.

As the "condom challenge" videos grew more popular, several other disreputable sites started spreading rehashed versions of the fake Empire News story.  Huzlers, for instance, used the same premise but changed the name of the victim to 17-year-old Emily Stone. The web site Report Quickly used the name Ashley Vandergoff. These reports are not accurate.

While the "condom challenge" is potentially dangerous, there have been no official reports about a teenager dying while filming the stunt.