Christopher Columbus was the first European explorer to discover America.

Columbus made four voyages across the Atlantic Ocean, but he never set foot in mainland North America (what would become the United States). While Columbus' voyages did take him to a few Caribbean Islands, which are considered part of North America, Leif Erikson, a Norse explorer, traveled to "Vinland" (modern-day Newfoundland) circa 1000 A.D., about 500 years before Columbus' explorations.

In October 2021, as the annual “Columbus Day” holiday approached, many people took to social media to decry the Italian explorer, noting his involvement in the slave and sex trade, and to rebuff the notion that Columbus had discovered America.

This is your yearly reminder that Christopher Columbus never set foot in North America. At most, Columbus Day is a Bahamian Holiday

The idea that Columbus discovered America is one of the most common misconceptions about the explorer. In fact, ever since the first “Columbus Day” holidays were celebrated in the 1800s (the very first Columbus Day was likely celebrated in 1792, though celebration of the holiday wasn’t widespread until the late 1800s), with school children singing their renditions of “My Country, ‘Tis of Thee” and other patriotic activities, people have been pushing back against the false claim that Columbus was responsible for the European “discovery” of the United States.

In December 1892, a few months after U.S. President Benjamin Harrison issued a proclamation to commemorate the “400th Anniversary of the Discovery of America by Columbus,” an article was published in Michigan’s Owosso Times entitled “The Columbus Canard” that debunked the claim that Columbus discovered North America.

Of course, everybody can obtain this information for themselves, but everybody don’t try to. They take Tom, Dick or Harry’s statement that on October 21, 1492 Columbus discovered North America – when in fact he did nothing of the kind on that date or any other – and then they proceed to celebrate the anniversary of an occurrence that never transpired.

Now I hope that school children will cut this out and patse it in their geographes for constant reference, and further, that grown people who have had Christopher Columbus standing on Plymouth Rock, in their minds, will take him down, dust him off and throw him away, for he was never there.

“The Columbus Canard” was not the first time that an author attempted to correct the record. A few years prior, The New York Times published an article (republished below in The Boston Globe) that started with anecdote about a broker who adamantly placed a losing bet on Columbus’ discovery of the North American continent: 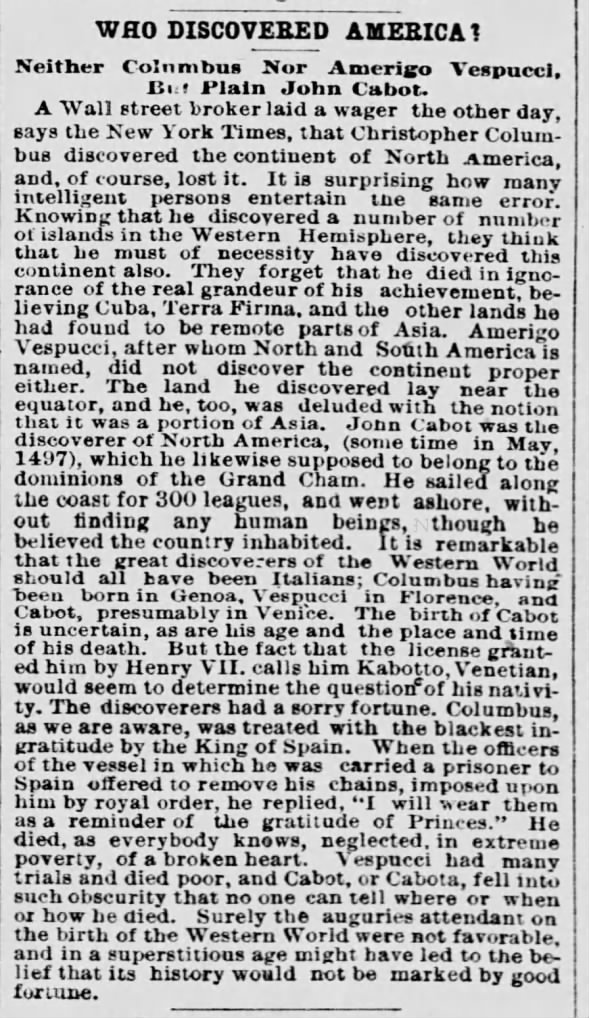 The article reads in part:

A Wall Street broker laid a wager the other day … that Christopher Columbus discovered the continent of North America, and, of course, lost it. It is surprising hoe many intelligent persons entertain the same error. Knowing that he discovered a number of islands in the Western Hemisphere, they think that he must of necessity have discovered this continent also. They forget that he died in ignorance of the real grandeur of his achievement, believing Cuba, Terra Firma, and the other lands he had found to be remote parts of Asia.

As noted in the centuries-old articles above, Columbus did not discover mainland North America. He made four voyages across the Atlantic, and while he saw Central America, the South American coast, and some Caribbean islands, including Puerto Rico, during his voyage, he was unaware of the vast land mass to the north of his explorations that would later become the United States of America.

During four separate trips that started with the one in 1492, Columbus landed on various Caribbean islands that are now the Bahamas as well as the island later called Hispaniola. He also explored the Central and South American coasts. But he didn’t reach North America, which, of course, was already inhabited by Native Americans, and he never thought he had found a new continent.

The Royal Museum of Greenwich adds:

In actual fact, Columbus did not discover North America. He was the first European to sight the Bahamas archipelago and then the island later named Hispaniola, now split into Haiti and the Dominican Republic. On his subsequent voyages he went farther south, to Central and South America. He never got close to what is now called the United States.

There are a few other problems with stating that Columbus discovered North America. For one, North America was already inhabited by the time Columbus didn’t arrive. This is one of the driving forces behind the push to rename “Columbus Day” as “Indigenous Peoples Day.” Second, another European explorer, the Norse explorer Leif Erikson, arrived in North America (Erikson landed in “Vinland” which is modern-day Newfoundland) about 500 years before Columbus first set sail.