Did a Coat Used by Prof. Marvel in 'The Wizard of Oz' Belong to L. Frank Baum?

"You're not suggesting I made up this coat story for publicity, are you?" 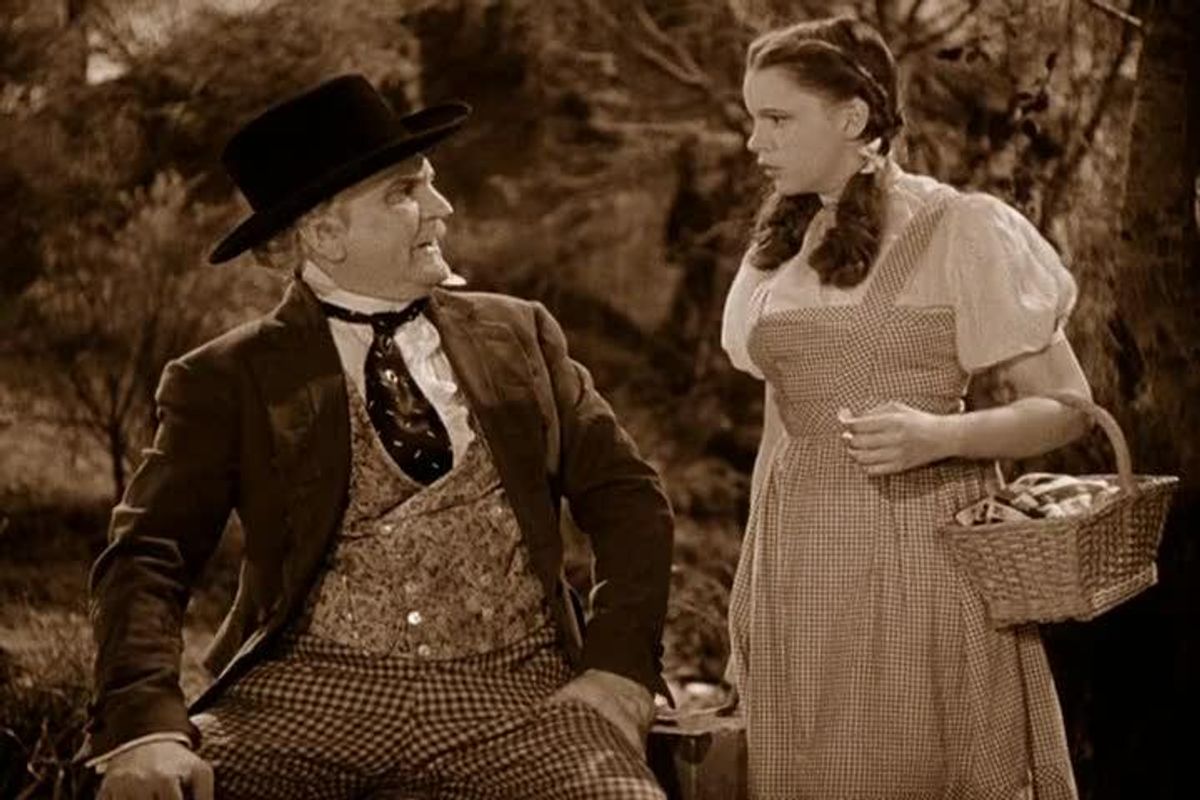 Claim:
A second-hand coat selected as part of the costume for Professor Marvel in the 1939 film version of The Wizard of Oz was discovered to have been owned by Oz author L. Frank Baum.
Rating:

Actor Frank Morgan played five different roles in MGM's classic 1939 film version of The Wizard of Oz: In the Emerald City, he was the cabby who drove the Horse-of-a-Different-Color, a guard at the entrance to the Wizard's palace, the doorkeeper at the Wizard's palace, and the Great and Powerful Oz himself; in the Kansas sequences that opened the film, Morgan also portrayed the disreputable fortune-telling Professor Marvel.

Nearly all of the makeup and costume designs used in The Wizard of Oz went through numerous revisions and changes before and during filming, and Morgan's outfits were no exception. Since the portions of the film in which Morgan appeared (the Emerald City and Kansas sequences) were the last to be filmed, there was even more time to fiddle with the outfits worn by his various characters. Although Morgan did not make his first appearance before the cameras until 14 January 1939, he posed for makeup/costume test shots of all of his characters in mid-November 1938. On 17 November 1938 (while the scenes in the Tin Woodman's forest were being filmed), Morgan tested his Professor Marvel makeup on the set, using the same costume he had worn for his Wizard test shots the day before. Six days later, Morgan again posed for test shots of the Professor Marvel character, this time with a different hairstyle, jacket, and tie. The story behind the jacket selected for this second shot (and ultimately used in the film itself) is one of the most curious of all Oz anecdotes: A tattered coat selected from a local second-hand shop by MGM's wardrobe department turned out to be a garment originally owned by Oz author L. Frank Baum himself. Once gainsaid as "an example of the lies press agents are willing to tell in order to get a story in print," the story of the jacket's origins was retold and affirmed by Aljean Harmetz in her book The Making of The Wizard of Oz:

What definitely did occur on The Wizrd of Oz — perhaps the most astonishing thing that did occur — was dismissed as a publicity stunt. Yet it is vouched for by [cinematographer] Hal Rosson and his niece Helene Bowman and by Mary Mayer, who served briefly as the unit publicist on the picture. "For Professor Marvel's coat," says Mary Mayer, "they wanted grandeur gone to seed. A nice-looking coat but very tattered. So the wardrobe department went down to an old second-hand store on Main Street and bought a whole rack of coats. And Frank Morgan and the wardrobe man and [director] Victor Fleming got together and chose one. It was kind of a Prince Albert coat. It was black broadcloth and it had a velvet collar, but the nap was all worn off the velvet." Helene Bowman recalls the coat as "ratty with age, a Prince Albert jacket with a green look."

The coat fitted Morgan and had the right look of shabby gentility, and one hot afternoon Frank Morgan turned out the pocket. Inside was the name "L. Frank Baum."

"We wired the tailor in Chicago," says Mary Mayer, "and sent pictures. And the tailor sent back a notarized letter saying that the coat had been made for Frank Baum. Baum's widow identified the coat, too, and after the picture was finished we presented it to her. But I could never get anyone to believe the story."

That an old coat of Baum's might have turned up in a second-hand clothes shop near MGM was certainly plausible, as the author resided in Hollywood for the latter part of his life. However, the documentation behind this legend is rather skimpy.

Where, for example, is the "notarized letter saying that the coat had been made for Frank Baum"? The only reason for obtaining a notarized letter about the provenance of a second-hand coat would be for publicity purposes, so the letter should have been retained and reproduced. Yet apparently no copies of that letter exist, and the only documentation presented to back up the veracity of this story in Harmetz's book was the decades-old recollections of a studio publicist. So we remain skeptical about how much of the tale might be true and what portion of it might be legend.